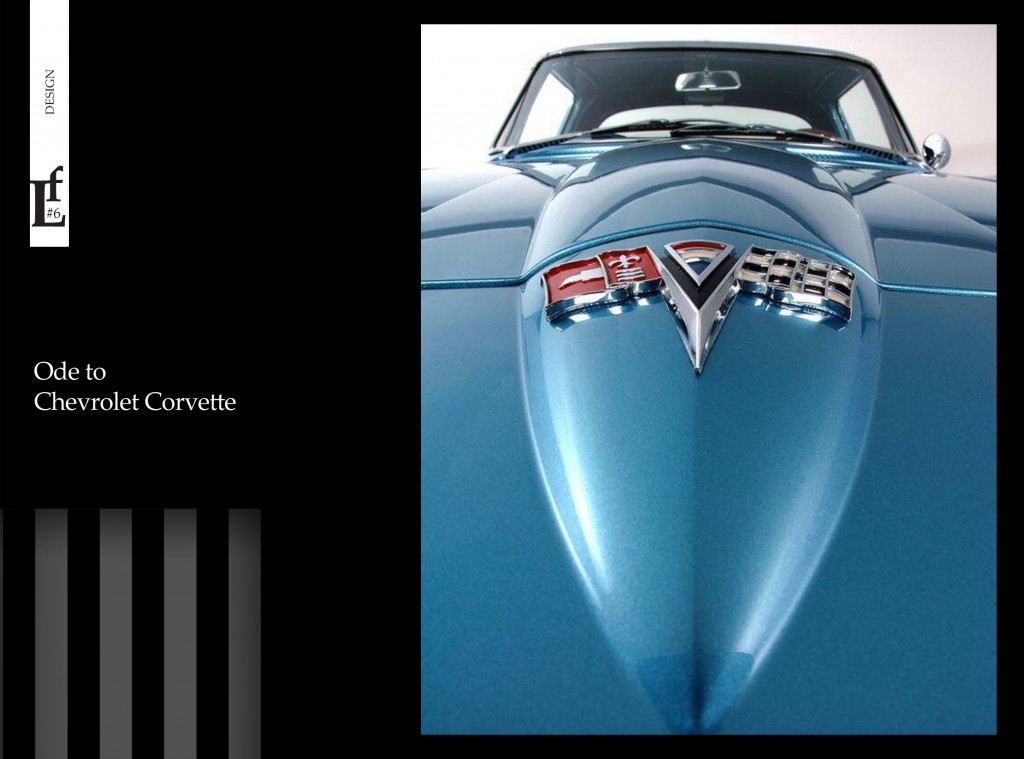 This article had been conceived quite differently. At first, It was decided to write about the history of the American automobile design, its golden era, the 1950s. But in the process of deepening into the topic, the author has fallen in sudden love with a single model, the model which has been produced for 60 years, the model, which through seven generations, not only did not lose his fans, but also has become a cult object of adoration in the latest, so and retro versions. To who would read to the end of this short review I will reveal my new passion, the version of this car, which is wanted  to have tremendously.

The daring design, innovative engineering idea and the spirit of sport combined in one car can not but admire. Chevrolet Corvette is the true legend, a kind of American icon of automotive design. Named as a small and maneuverable sea-going vessel, Corvette reflects its character, easy, yet powerful. 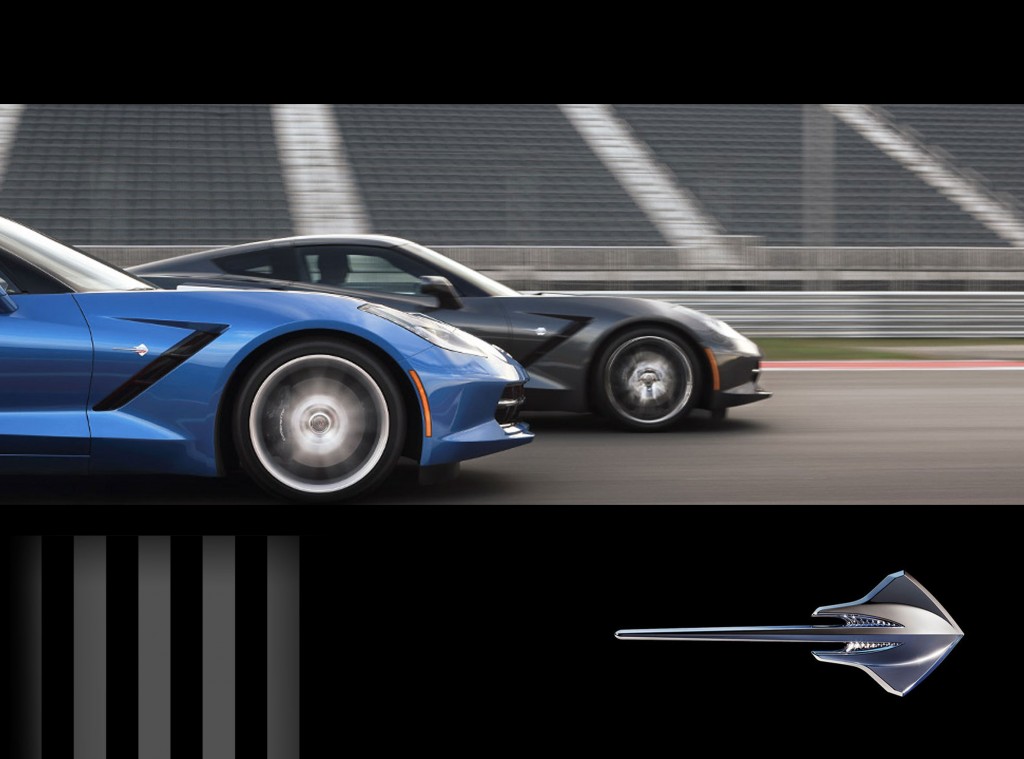 But this could not happen, because it all started not with the fantastic success, although attention of car enthusiasts was attracted  at the GM Motorama auto show in 1953, where the first model was presented by Harley Earl, chief styling department General Motors. 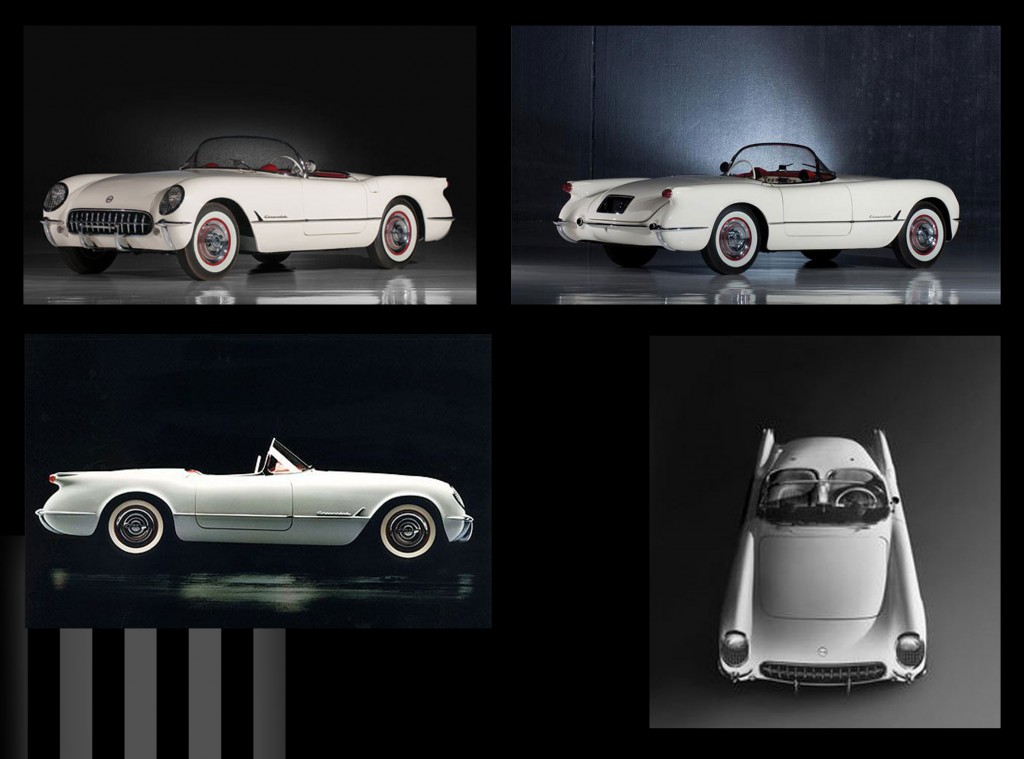 But under innovative forms were rather modest specifications. It was a disappointment that could put an end to the new project, if there was an engineer,  Zora Arkus-Dantov. His passion for racing had grown to whole career. By the time the first  appearence of corvette, Arkus-Dantov had his own company for the production of spare parts for engines. He had seen this model at the auto show and was impressed by its design, aviation forms that  so inspired Harley Earl. 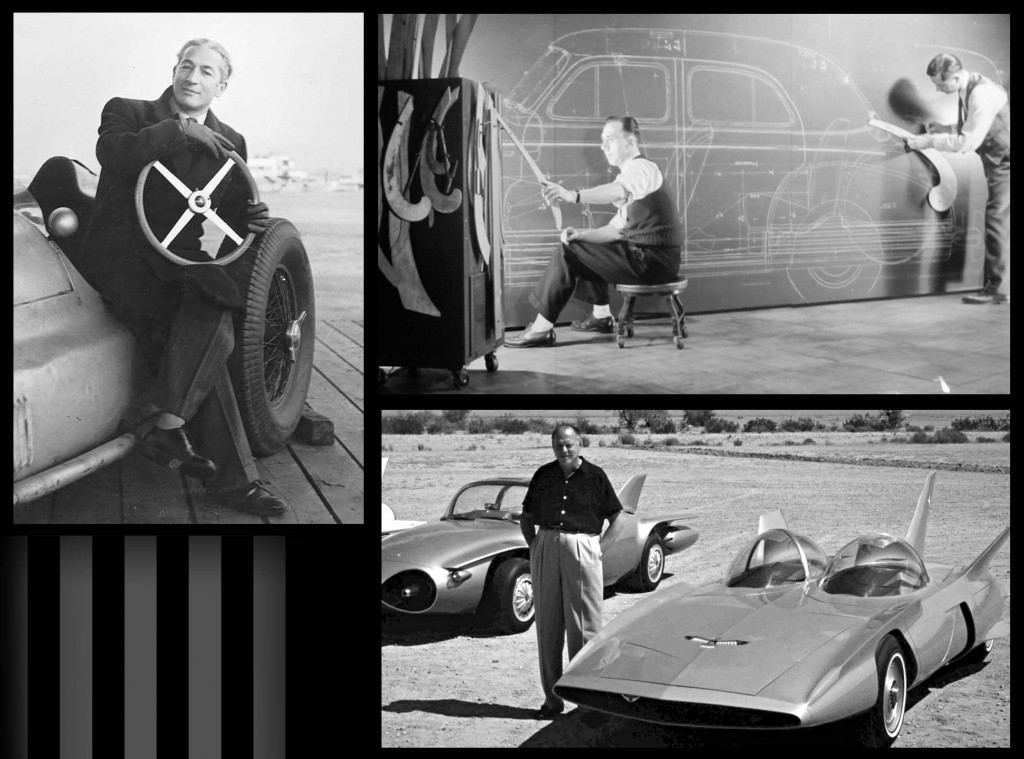 But the «stuffing» of the model has been unsatisfactory for a sports car. Zora wrote to the leadership of Chevrolet, his calculations and suggestions for improvement of the technical side. These engineering calculations impressed top managers of the company and they hired Dantov as a assistant of constructor.
He remained faithful to Chevrolet Corvette to all life. The engineer himself set several records on this car. Zora Dantov and Harley Earl are considered «fathers» of the legendary model.

The model was updated every year. Designers and engineers inspired by the ideas of creating a true American sports car improved it with all their passion. 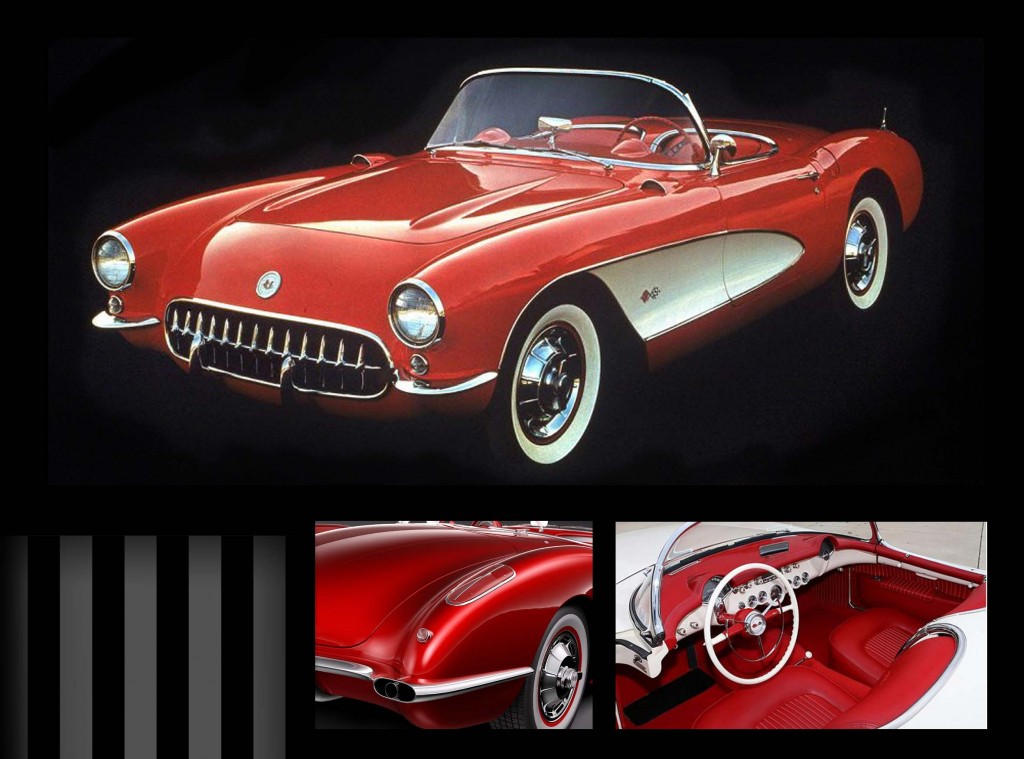 In 1955 engineers had been led by Dantov replaced the engine on V8 in volume of 4.3 liters by increasing the car till 195-hp. from. New carburetor engine with 3-speed manual transmission was impressed by motorists, and sales increased. After another couple of years engine displacement increased to 283 cu in (4.6 L), fuel injection became optional, and a 4-speed manual transmission was available.

There were design changes, the shape of the rear wings has changed, and in 1958 the front of the machine received a twin headlights. Over the years, corvette engines become more and more powerful, and in 1962 it was already possible to buy a 360-strong version with a 5.4-liter monster under the hood.

Since the birth of first car the assembly line went off about 70,000 Chevrolet Corvette C1. It is commonly referred to as the «solid-axle» generation, as the independent rear suspension did not appear until the 1963 Sting Ray.

After 10 years of the production of the first generation of elegant and sports cars, Corvette С2 transformed into no less spectacular, but a completely different form. 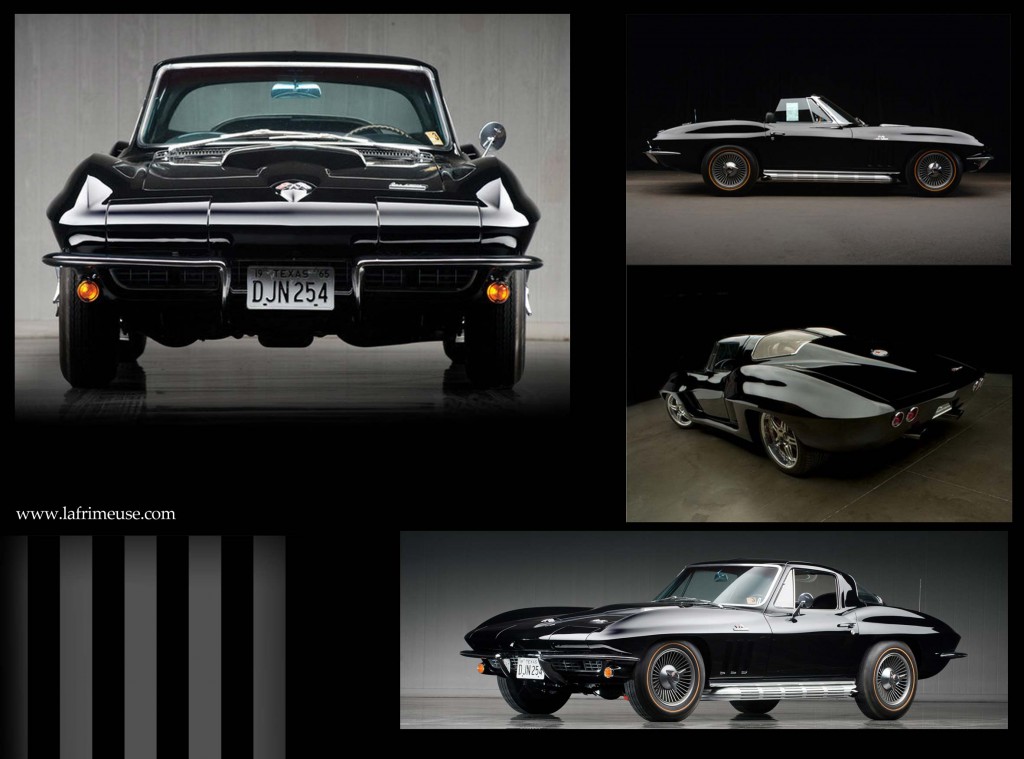 Under the guidance of Billy Mitchell, head of the design department was created the famous sting ray. His form really looked like the outline of an stingray. It had flat silhouette and predatory lines of the body.

The characteristic features of the car were the fenders formed a sinewy frame to the wheel arches, the famed rear «split window», which was only for one-year model, the hidden headlights, which are then passed on from generation to generation up till C6. now it had an independent rear suspension with a single transverse leaf spring, and offered electronic ignition. Corvette Sting Ray became more powerful and lighter than its predecessor.

Dantov said of the new corvette:«For the first time I now have a Corvette I can be proud to drive in Europe». «Stingray» was originally conceived as a 4-seater coupe. At one of the shows of the prototype, GM’s president Jack Gordon got in the back seat, but the seatback of the front seat jammed. The chair was removed to release the top manager. Gordon stormed off, and that was the end of the four-seater Sting Ray. The rear seats are no longer designed and «Corvette» remained, as we know now it, a purely sports car.

New forms of fully reflect his strength and power, is now under the hood is a 435 hp. Engineers to make a car perfectly controlled, equipped with its disc brakes for all wheels.
The release second generation had lasted five years. Over this period, it was released about 118 000 «stingrays». This racing model of this period was a version of the Grand Sport c V8 volume of 6.2 liter, the engine was pumping our 550 horses. They were created only five. They are rare and have a collector’s value. 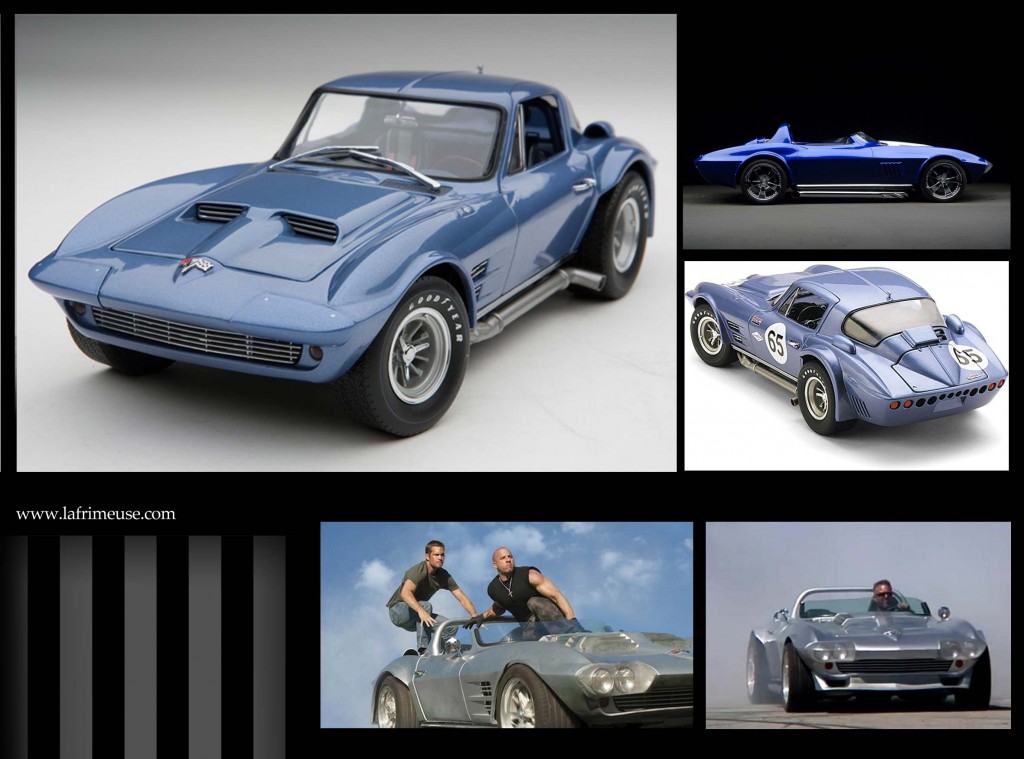 The History of Grand Sport deserves a particular narrative, briefly we can say that it was made in spite of discontent leadership of General Motors. Chevrolet corvette lovers would never have learned this unique ultra-light model if would not the Dantov’s passion of his creation and in particular, a special love for racing modification, and his expert skills to get round  bureaucracy and his organizing of secret work, and if would not the help general manager of Chevrolet Division Semon Knudsen, who provided informal funding.

At the end of a career, Dantov was asked the question.

– What word do you associate with “Corvette?

-With anyone whose opinion differed from mine. 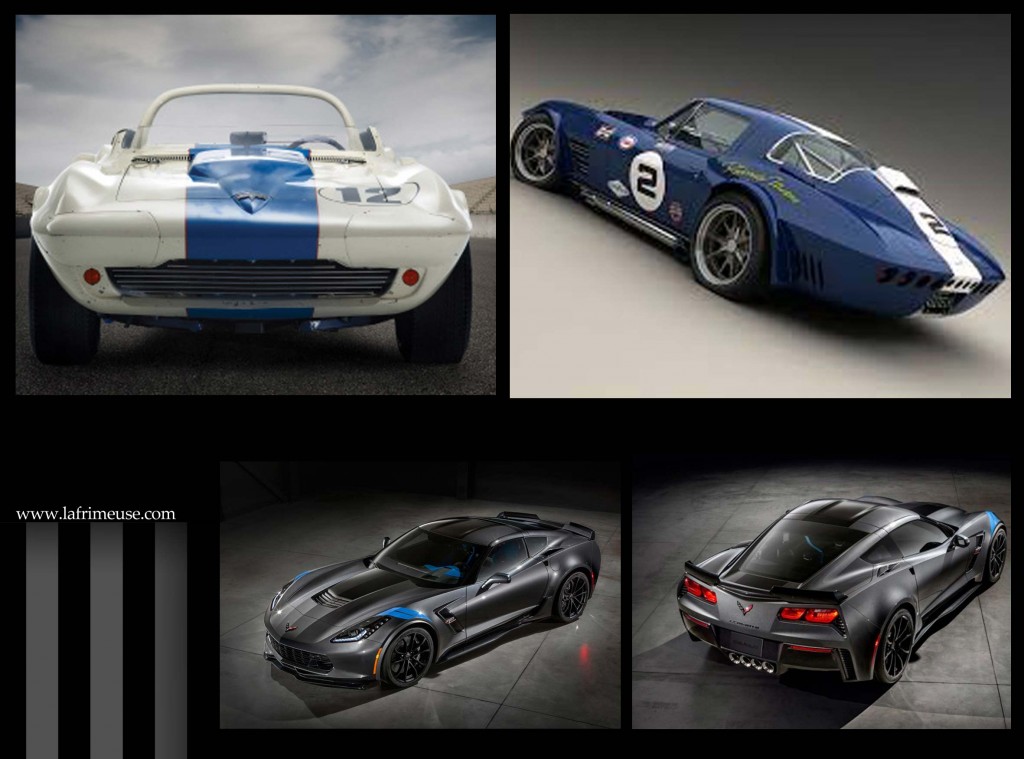 It is interesting to note that today C7 Stingray repeats some constructive aspects of Grand Sport, and not only in styling and uncompromised tapering roof line, but to manage the air flow and the emphasis on weight reduction. Note the extractor on the hood and air intakes on the rear quarters panels on both cars. 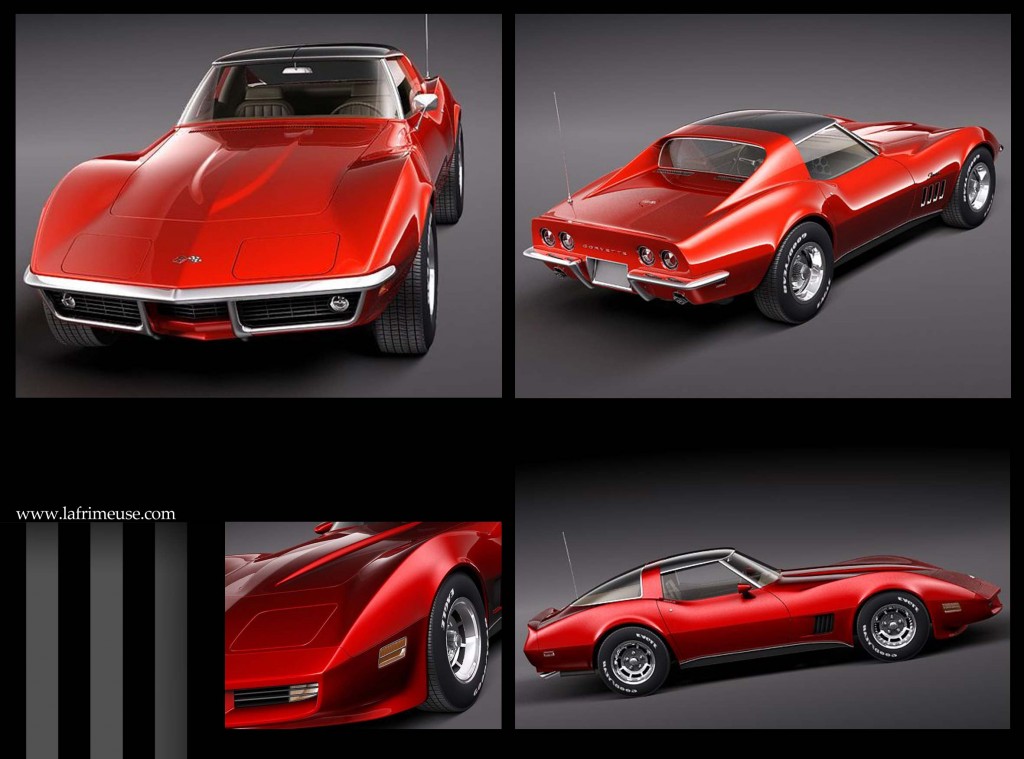 Since the third generation of corvette (1968-1982) the word Stingray had began to write together. But this is not the point. Completely different design, so that was revolutionary. C3 was based on the concept Corvette Mako Shark II in 1965. 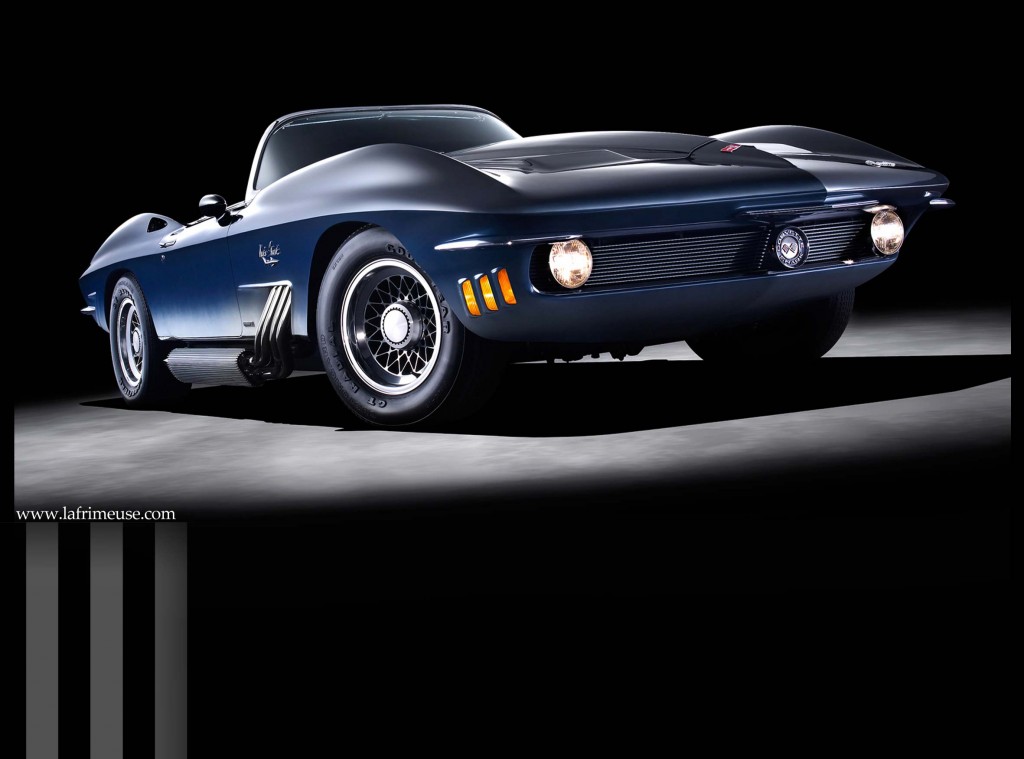 Design of corvette created by David Holls was impressive.
Due to the complex shape of fenders, this car looks innovative now . By the way, David Halls inspired the form of a bottle of “Coca-Cola” (designer Raymond Loewy, became famous also as an automotive designer). 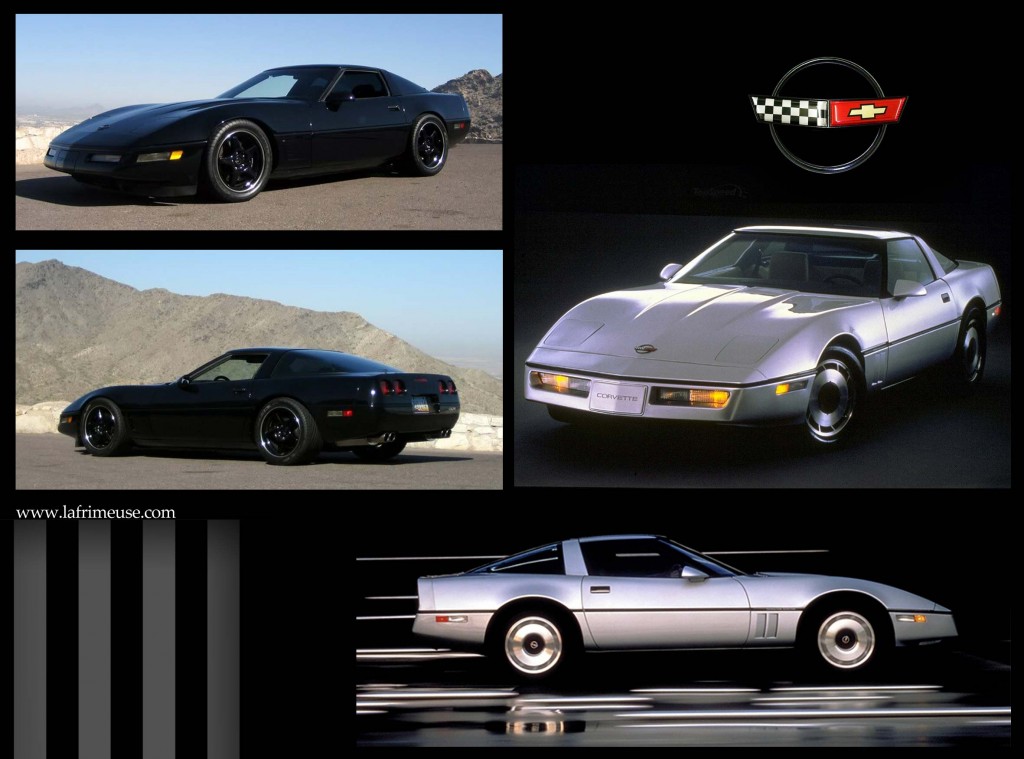 Soon the oil crisis hit the powerful engines and fuel taxes increased. Since 1975, almost two decades the company had ceased to issue convertibles.
In 1983 the first samples of the fourth generation came to the market. They had not so daring appearance of their predecessors. But there were carefully considered as the technical part and so aerodynamics.

Like all generations, Corvettes С4 were constantly improved. Each year, Corvette Chief Engineer Dave McLellan and dedicated team of engineers and designers developed further this legendary model. Few could have predicted at the end of ’83, when first C4 were shown that this generation Corvette would be produced almost as long as the generation C3, as much as 13 model years.

In 1986 the Corvette convertibles were revived. 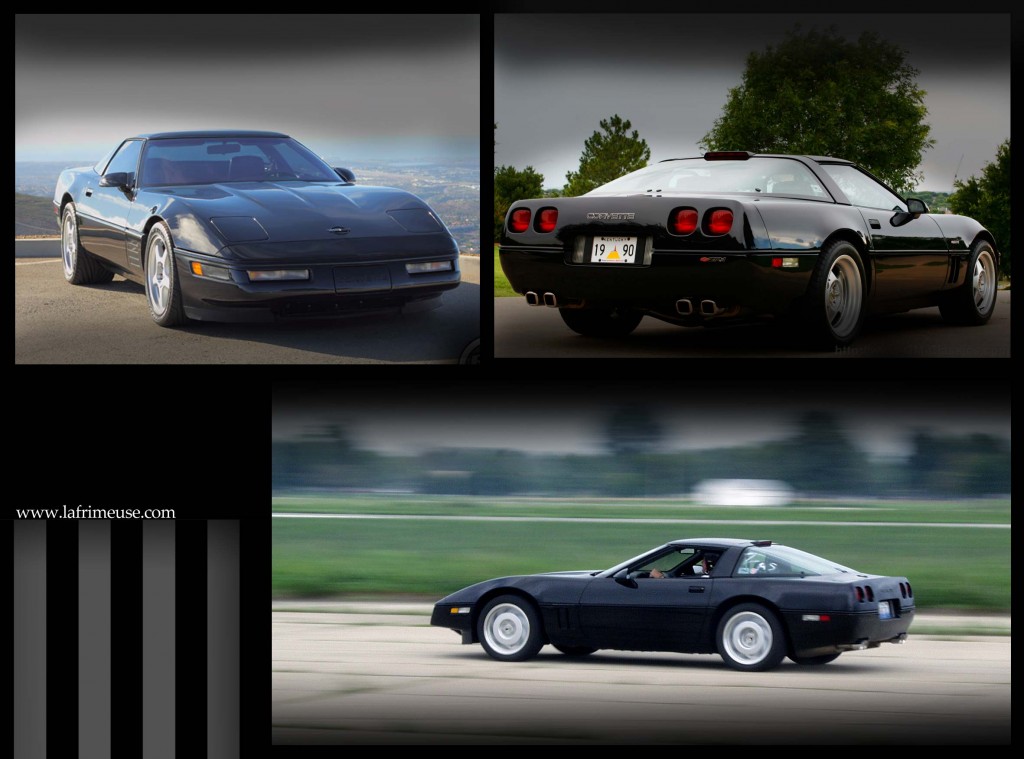 In 1990, the first Corvette ZR1 was built on the basis of C4 , equipped with a 375-horsepower V8 L98 model. This caar was designed for extreme driving and cost twice as much as standard.
In 1996 Chevrolet Corvette C4 Grand Sport was released on limited edition, named after the eponymous 1963 model. 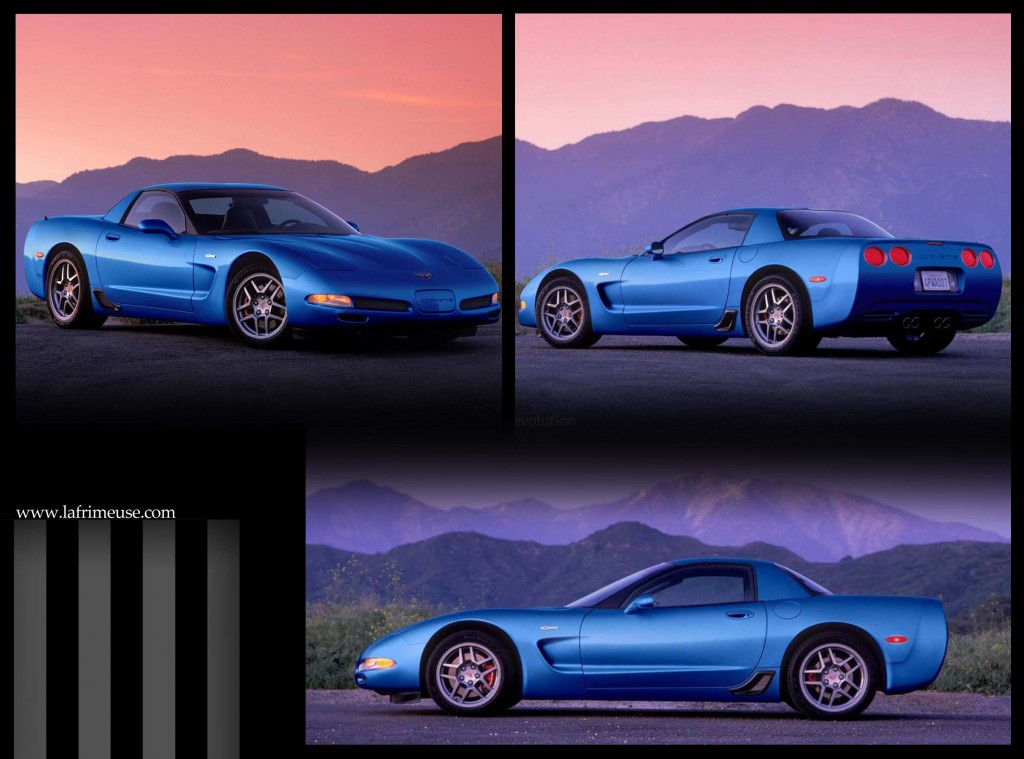 Design of C5 was created by John Caffaro, he returned finally a trunk.

The chief engineer Dave Hill offered the Backbone frame, in which the central tunnel of the profiled steel supported enhances body strength, reducing vibration and providing a soft stroke. Hydroforming was the advanced method  used  in the manufacture of the frame, helped to reduce the number of welds and increase stiffness of large metal structures of complex shapes.

One interesting point that the first 200 first cars of generation C5 rolled off the assembly line were painted red. Normally, when starting a new production cycle, the first 200 cars produced in white paint. 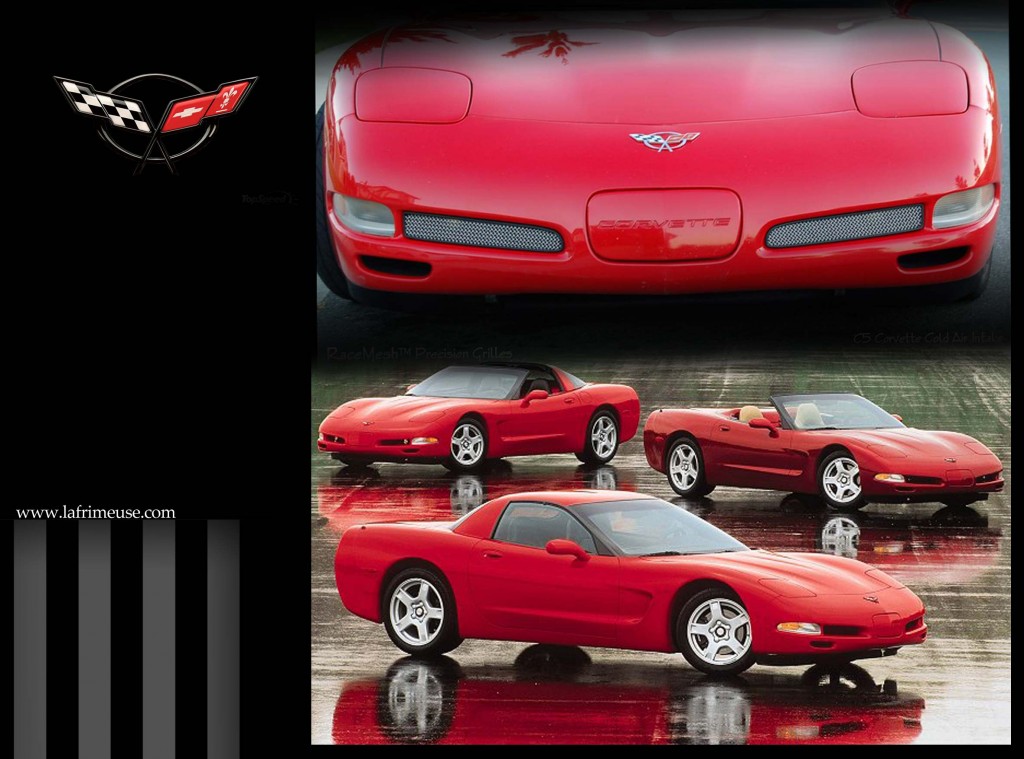 In January 2004,  the ultra-modern Corvette C6 submitted as a coupe and convertible. The features of C6 were non-pop up (fixed) headlamps that had returned on Corvette  first since 1962 again. Several modifications had been created on its basis of Corvette Z06 with a powerful seven-liter 505-horsepowers LS7 engine and  Racing Corvette C6 R.

The car was built private team Pratt & Miller , equipped with a modified engine from the Z06 and was extremely reliable. Since 2005, the car won the race at Le Mans five times. This extreme Corvette ZR1 was equipped with a powerful 6.2-liter supercharged engine ls9 and is capable of 638 hp. 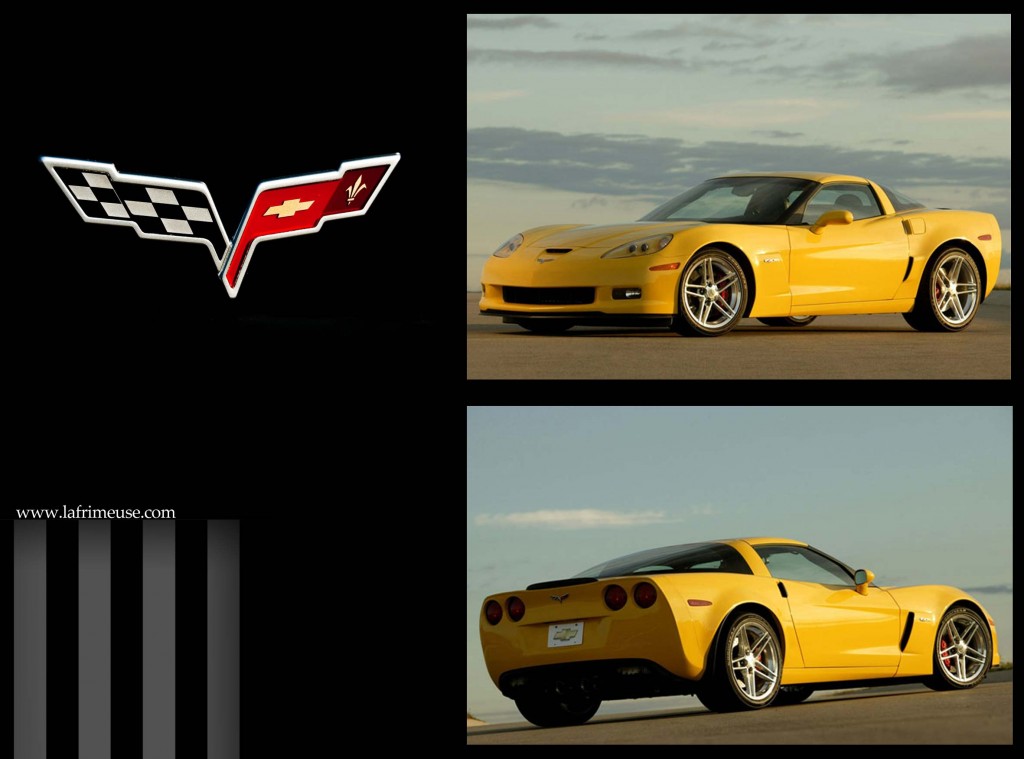 In 2013 was the last for the sixth generation, completing the 60-year history of the legendary Corvette. 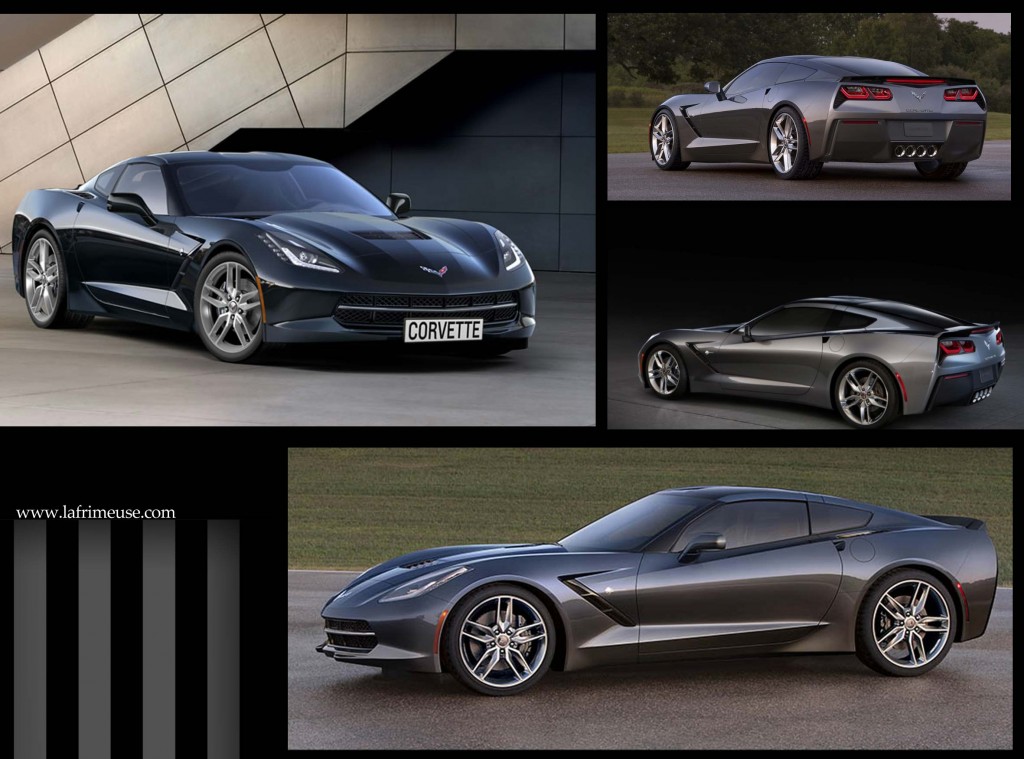 Design of C7 has gone far ahead of their predecessors. The model has become a more technical and technologically: the elements of the body, such as a hood made of carbon fiber, and the fenders, doors and rear panels are molded from composite. The underbody panels made of carbon-nano-composite, but framed with aluminum. But, despite all the “relief” of the machine weight gain is not small and amounted to 1562 kg, which is 54 kilograms more than its predecessor. The round taillights are replaced by a sharp squares of irregular shape.

Just as 60 years ago Zora Arkus-Dantov wrote the strategic program on the development of his favorite brainchild called it “Thoughts Pertaining to Youth, Hot Rodders and Chevrolet,” now we may also headline any review, article and description of this legendary car. It does not matter what is the generation of the car we are talking about. The three main components of the philosophy of the brand remain the same: youth, hot blood and Corvette.

And ta-da-da-da, the promised bonus: 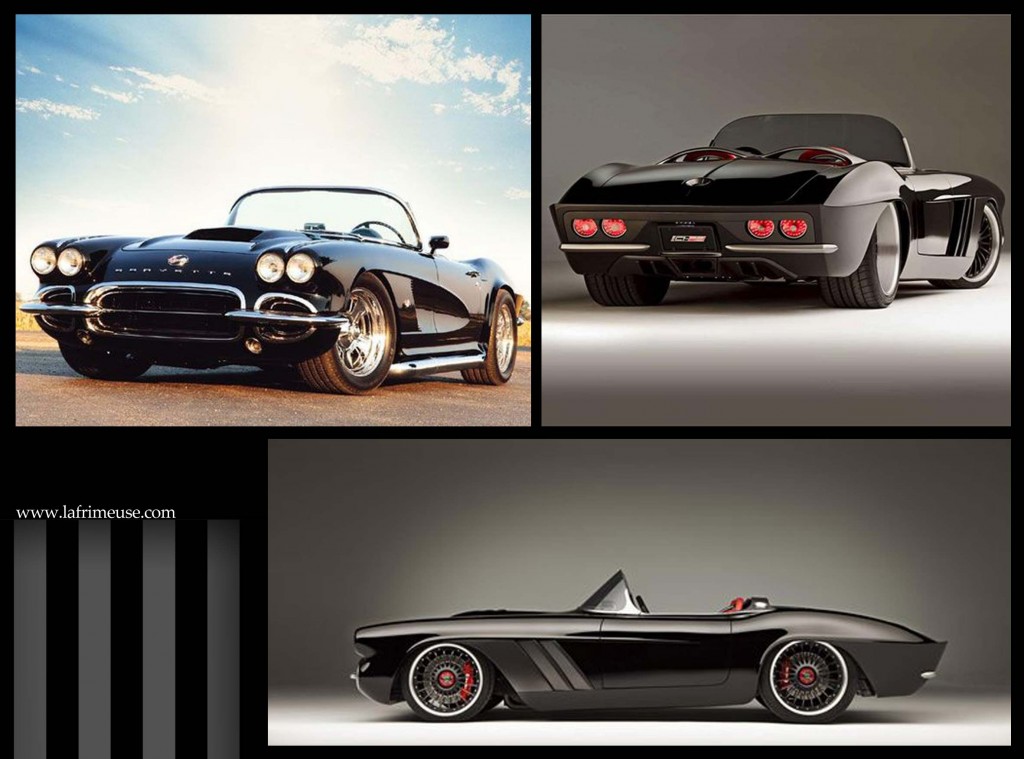 Chevrolet Corvette, 1962, the last year of the release of the first generation, now it’s dream car (the version of  La frimeuse). It has everything, the style, elegance and simply chic.

This review is written from the point of view of design, the other detailed technical specifications, you can find clicking on the links below.