The fantastic way of art of XVI century. The extravagant mannerism. The Jewellery of Germany 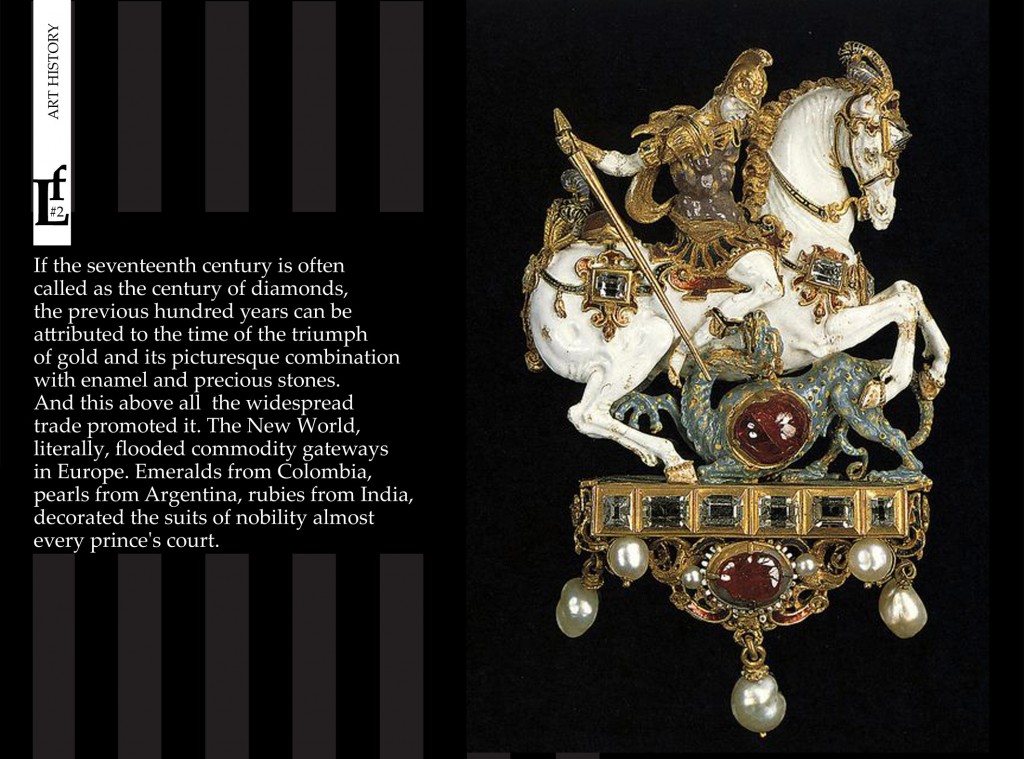 Nuremberg, Augsburg, Frankfurt, Antwerp, Paris, London and Barcelona were the most important centers of production and trade in jewels.
Urban wizards created the true masterpieces in miniature. Many prominent artists worked on sketches of jewelry – Salviati in Italy, Durer in Germany. Even, Hans Holbein the Younger, went down in art history as the great portraitist, was the main creator of designs of adornments for King Henry VIII in England. 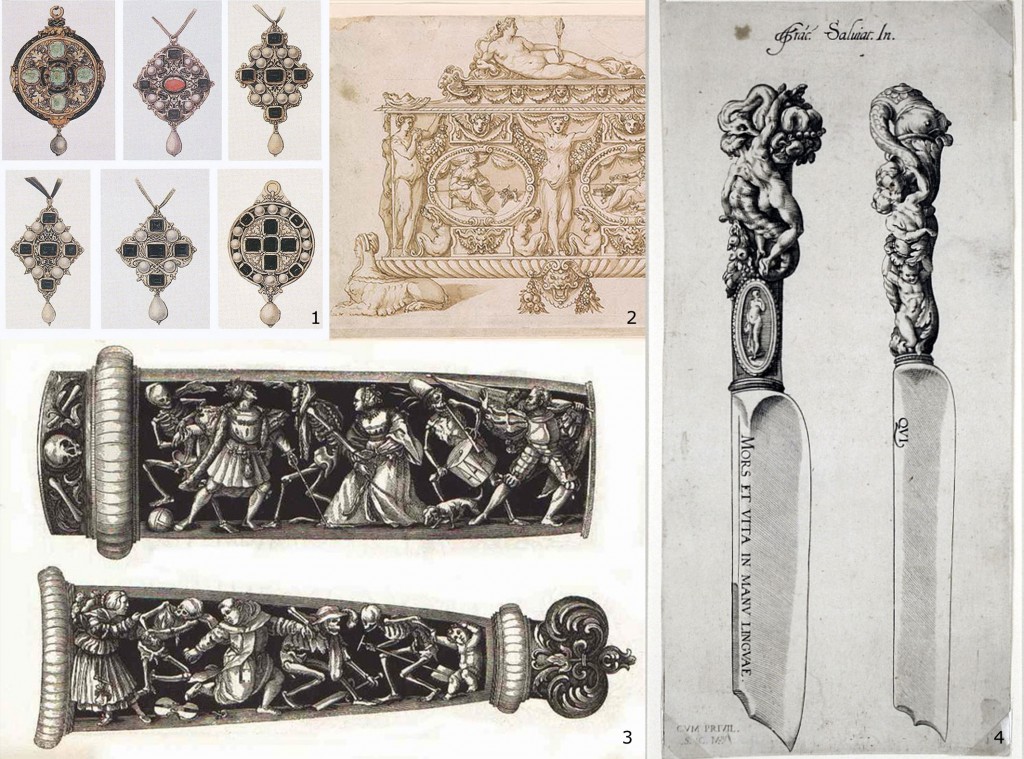 The typical image of a jeweler of the XVI century we outlined in his biography of Benvenuto Cellini. He believed that the talent of the artist is more obvious, when he was lucky to be a contemporary of the great sovereign, interested in all kinds of arts.

Therefore, outstanding artists and jewelers XVI century under the auspices of the richest men of their time, mostly members of the ruling dynasty, established the court’s style called «Mannerism». 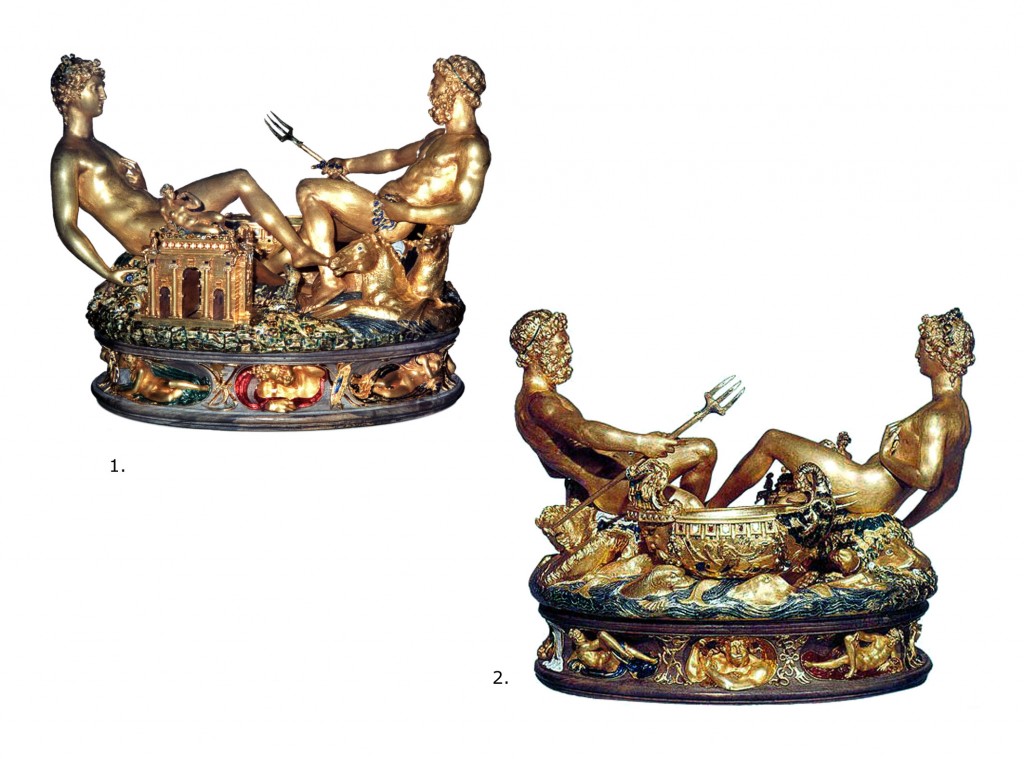 1. Benvenuto Cellini. Saltcellar, called the “Saliera”, made 1540-1543 in Paris. Gold, covered in part by enamel; base: ebony. The Historical Museum, Vienna.

2. The another side of this saltcellar

This style should to show the richness, the refined taste of the customer and the technical capabilities of the executor. And although many experts consider that Mannerism is   the style of decadence,  the conscious movement against the Renaissance, the reaction which reflected the tensions and doubts of that time.  But it got vast development and turned its extravagant forms in real masterpieces in decorative art.

Masters of mannerissm , raising all strange and incomprehensible and bizarre to the rank of aesthetic ideal, found it in jewelry the most appropriate means to implement their ideas. Artists invented not only new forms and patterns, but altered the decorative motifs that were developed in the previous era of the Renaissance. 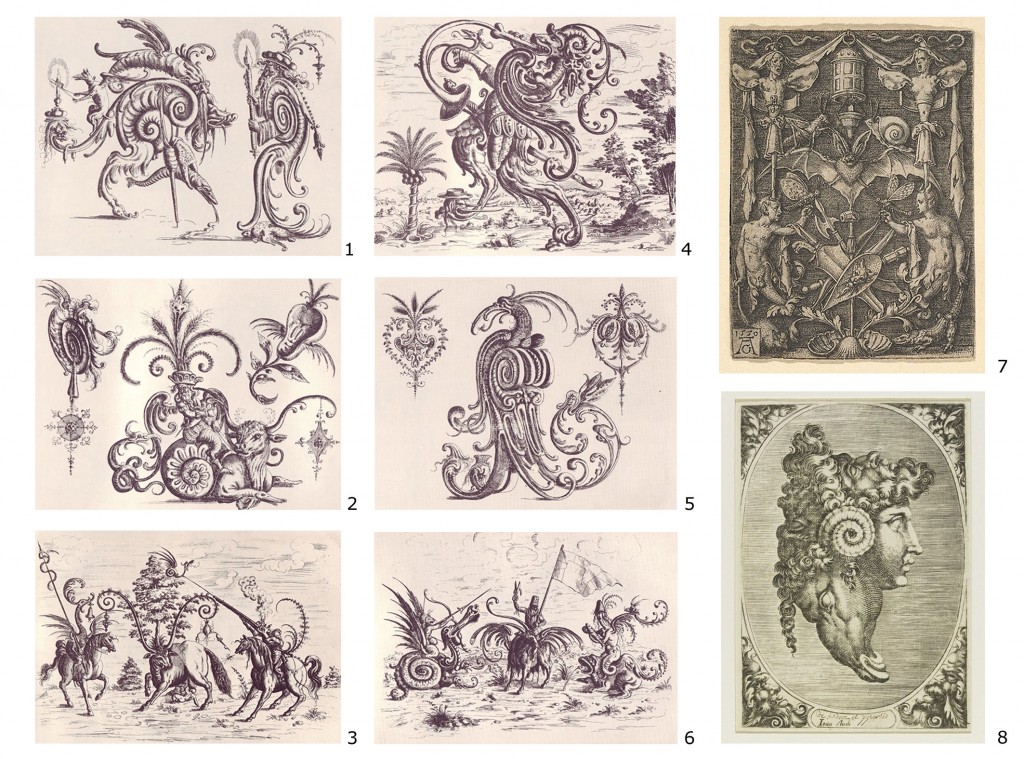 In heydays of mannerism utilitarian objects became so decorative  that sometimes lost their practical importance, getting  true wonderful things. Therefore, the most characteristic jewelry works in this direction had been made for collectors and are intended to decorate the treasury or Kunst und Wunderkammer.

A huge number of works disappeared in the wars of the seventeenth century, as well as gold gives way to the diamonds, priceless works melted for the sake of fashion.
it can be seen in collections such as the Waddesdon Bequest, Pierpont Morgan and Wernher. They are tiny remnants of the main stream jewelry XVI century. While we can get a limited number of examples depicted in portraits nobles and enterprising merchants, the basic material for the study can serve numerous drawings, engravings, books with samples of sketches and inventory collection. 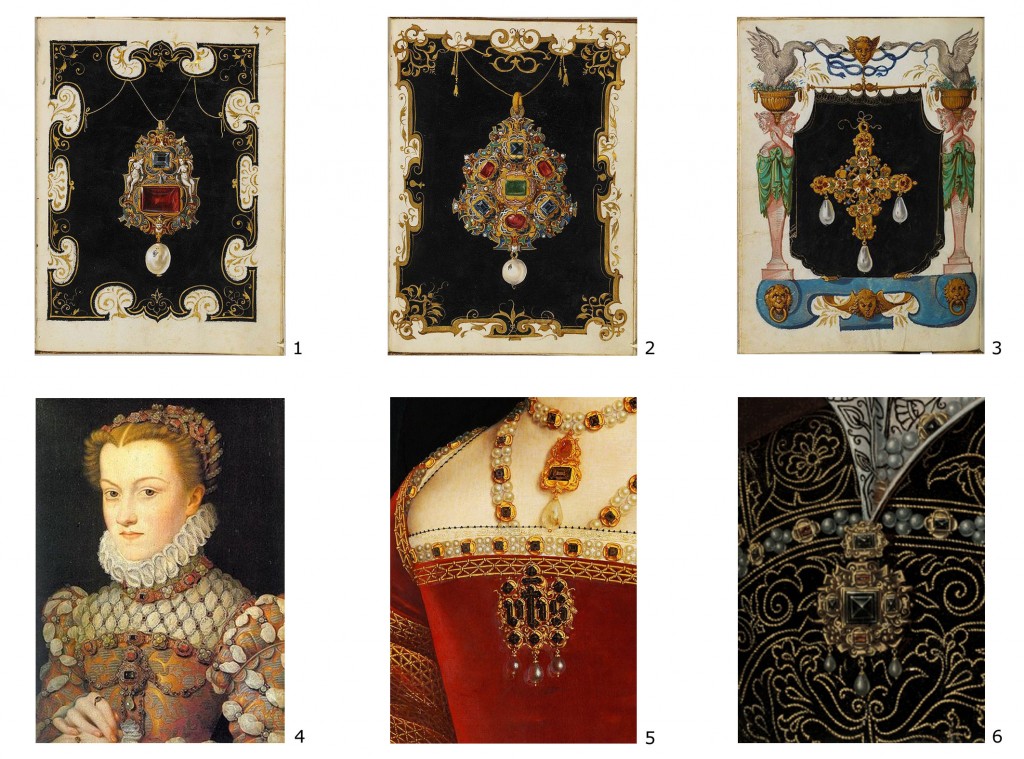 6.  English School, 16th Century . After Anthonis Mor. Portrait of Mary I of England after the face pattern by . In this version Mary is depicted in an elaborately embroidered dress with a blackwork-lined Medici collar and matching high-necked smock, with a French hood.

Jewellry were  signed rarely, and the style and manner of performance became international quickly. The most extensive  flow of the products was coming from Germany. In truth, this territory was the country of crafts in that time. There was a huge number of local schools and trends existed , is due to the fragmentation of the German lands. These art centers sharply divided into southern and northern. South of the country tended to Italian art and became on  the way of innovative ideas, the northern region perceive them with some delay.

Augsburg connected with Italy closer than  the other city  of Southern Germany. It reached  its heyday, thanks to the patronage of the Catholic Duke of Bavaria and senior clergy.

Protestant Nuremberg had more difficult way of development , and to sustain strong competition, the masters of this ancient craft got started to apply innovative ideas and artistic techniques.

The main centers of Northern Germany were the cities Lübeck, Lunenburg and Hamburg, gravitated more to the Dutch school. They made strange and extravagant bowls and cups that reached up to the height of human growth.

Mannerism as a trend in art was a reaction to the artistic principles of the Renaissance. Although mannerists-painters used naturalistic ornaments, but in general, their spirit was attracted to anti classic  and anti realistic decor. They developed with great pleasure and creative energy the ornamental theme in incredible and even abnormal comparisons. Horror vacui (lat. “Fear of emptiness” is  the filling of the entire surface of a space or an artwork with details.), was fundamental tenet of the theory of mannerism. 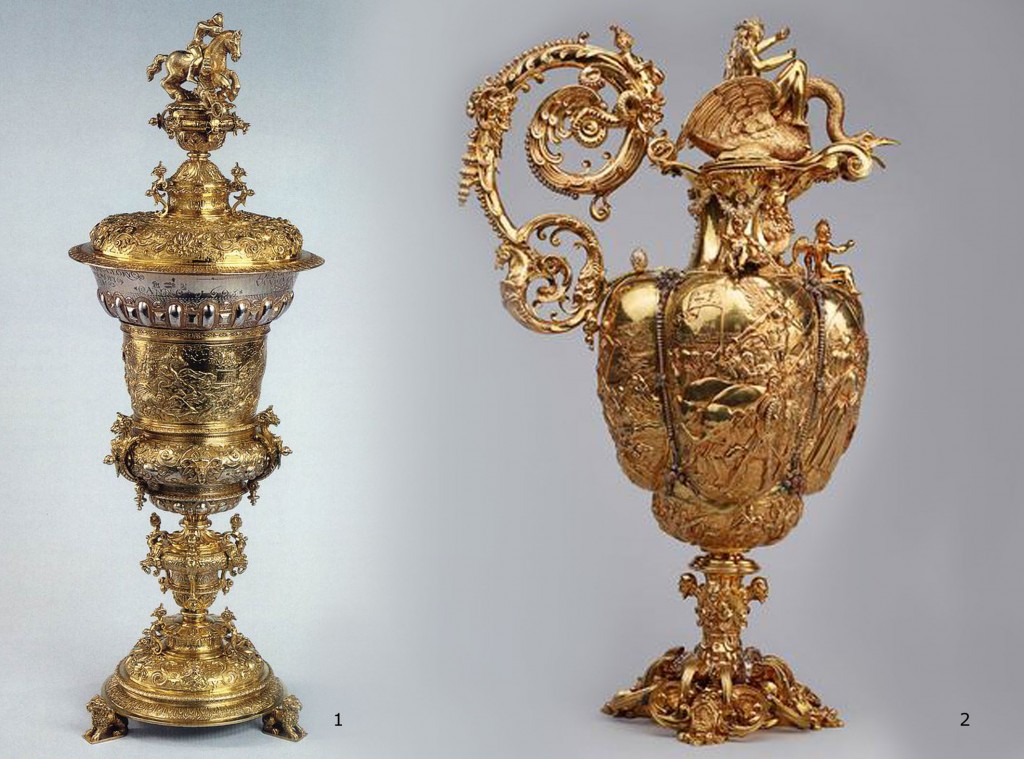 The study of ancient patterns that covered the vaults, sunk under the sea spaces – «grottos», led to the grotesque, to the most popular ornament of the sixteenth century.

The grotesque got started of its fantastic and full development. It formed surreal associations in which the animals, vegetables, architectural and abstract elements were got together in an incredible compositions. 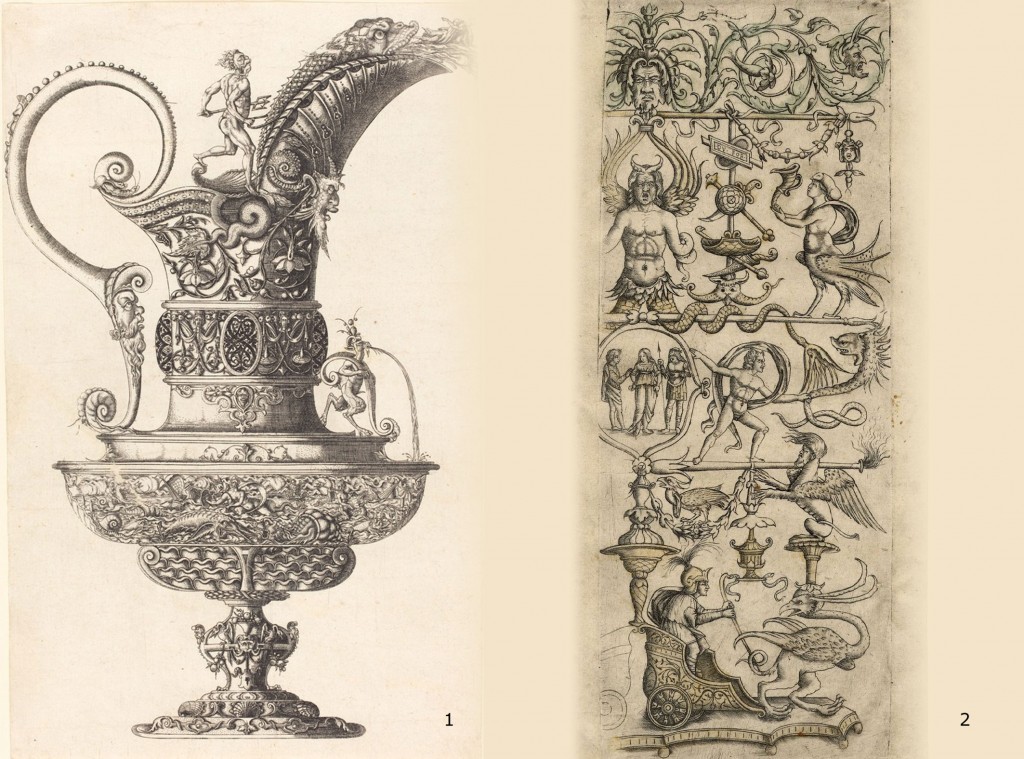 2. Ornamental panel with grotesque figures: vertical design in four tiers, with a chariot drawn by a griffin at the base Engraving, retouched and slightly coloured Print made by: Giovanni Antonio da Brescia Italian. Date1510-1520.

The thirst of the Mannerism for spheres mysterious, dark and using unusual forms reflected in the choice of rare and expensive materials. To create their works, they actively used the precious metals, gems, exotic wood, shells.

The main centers of jewelry crafts were the cities of southern Germany – Nuremberg, Augsburg, Munich, Ulm.  The most important of these was Nuremberg. And not just because more than six hundred famous jewelers had worked there for a hundred and fifty years, but also of the enormous amount of work that has survived to our time.

The glory of jewelry Nuremberg  enhanced largely by creativity of Wenzel Jamnitzer, one of the most brilliant and original German artists worked in the style of Mannerism. His role in the art of Germany’s significance could be compared with Benvenuto Cellini in Italy. 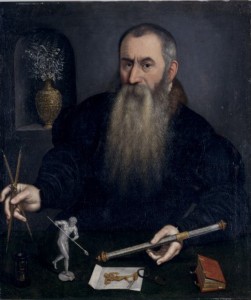 During his long life he experimented with many styles, from the Renaissance and Mannerism, and ending with the Neo-Gothic. He was not only an excellent executor but also the creator of the sketches for his works. One of the outstanding works of the master is a central part of the silver table, ordered by the mayor of Nuremberg. The table has not been preserved, but the center of his composition has reached us in excellent condition. The idea of ​​this thing carried philosophical program. The center of the composition is a figure of Mother Earth, symbolizing fertility.

The figure of the earth is on the pedestal entirely covered with grass, flowers, lizards and reptiles, molded directly from nature. Grass and flowers were so thin that trembled even under light contact. 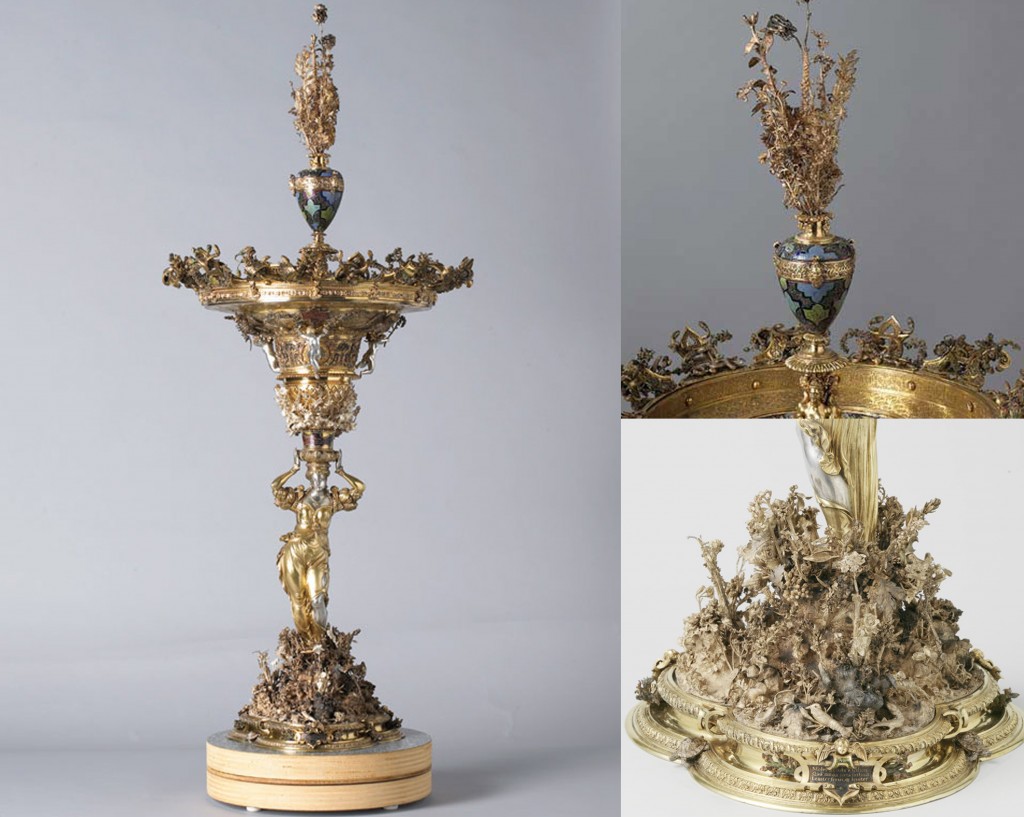 Wenzel Jamnitzer, Merkel Table Decoration. Goldsmith work, 1549, Amsterdam, Rijksmuseum.
Wenzel Jamnitzer was the only one german jeweler of the sixteenth century, who was a virtuoso performer of his own ideas. During his long life he witnessed the establishment of manneristic style and its direction of the war with the principles of the Renaissance. But Jamnitzer was a master of both styles. His masterpieces include, as the features of the classical Renaissance and Mannerist extravagant features.

This unique creator became famous as a pioneer in the technical side of the jewellery.
Among his innovations was the process of reproduction of the ornament by mechanical means, i.e. the use of a stamp. As well as his invention of the casting herbs, flowers, insects from nature. It is the original decor of its things.

It is impossible to imagine a full picture of the development of German art of the Mannerist jewelry without mentioning the name of Erasmus Hornik.

This goldsmith, engraver, military engineer, finally, the artist has left a large number of hand-drawn sketches and engraved sketches for  jewelry. In the modern sense it can be called one of the first «designer»in the field of jewelry. 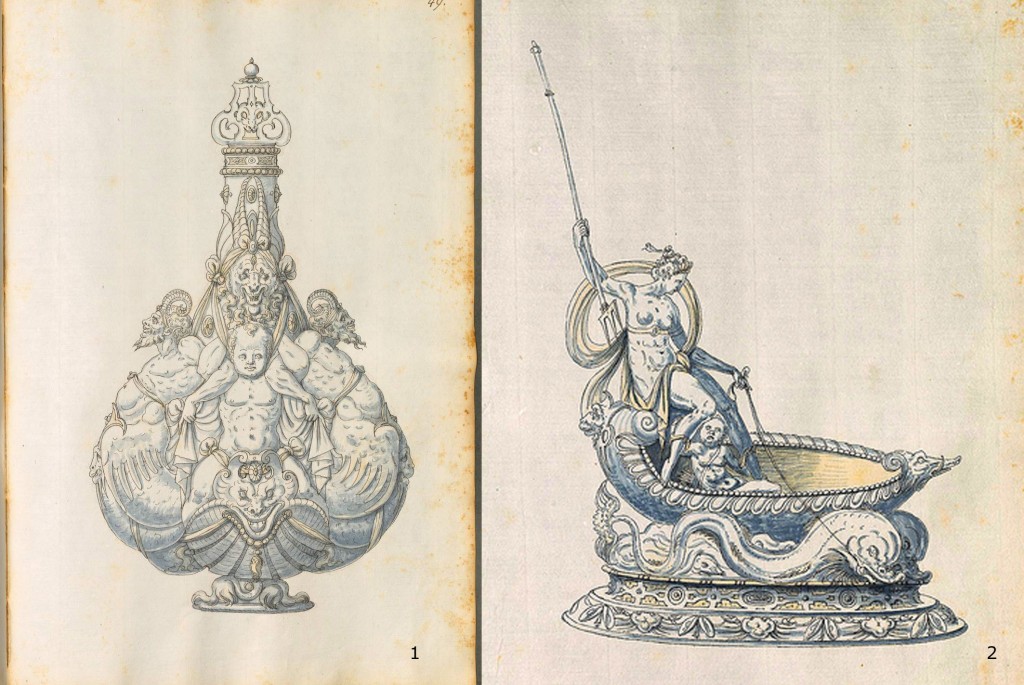 We know few facts of his biography. Presumably he visited Italy. Indeed the impact of Italians felt in his ornamental themes. He copied drawings by famous Italian Mannerist Francesco Salviati and Giulio Romano with enthusiasm. But despite the addiction to Italian sources, he developed his own style.
There are several albums in his drawings. The largest collection is in the Victoria and Albert museum. The most interesting paintings from this album are sketches of salt-cellars.

Importantly, this utilitarian object meant wealth and a special status of the host. The most famous extant salt-cellars were made by Benvenuto Cellini for the French king Francis I.
The theme of the decor is related as the Italians and Hornik with symbols of salt water. For example,the figure of Neptune is in a chariot driven by sea horses or Aphrodite in a shell drawn by dolphins, is depicted in the sketch above.

Hornik was also known as a jeweler. The most popular decoration of the time were               pendants. It has been fully demonstrated the ability of the artist to reveal a variety of subject in miniature in the era of Mannerism. there were different themes – mythological, biblical and historical.

There is plenty of pendants close to the style of Hornik. Like many others jewelers of that time, the master liked to use baroque pearls.
Their irregular shape he builds a body of dragons or mermaids busts successfully. The rich color combination of enamel and precious stones made his works real masterpieces.

3. Gold enamelled pendant- jewel depicting a galloping horse with warrior. The horse and rider are depicted facing left but are executed completely in the round. Germany 1526-1575. British Museum. Waddesdon Bequest.

Elegant, graceful, refined, luxurious, with an intricate storyline compositions, Mannerism in jewelry has reached its peak, to turn into real masterpieces. The use of precious and exotic materials, masterly applying of the most complex machinery and profound philosophical program – all this could not be better reflects the main manifesto of style – “To surprise!”. To impress the audience with wealth, refined taste and skillful execution.

1. Erasmus Hornick. A gold toothpick. The handle is formed of a naked female figure of Lucretia who is adorned with flowing bands enamelled in blue and red, and with garters of red enamel just below each knee. Her head terminates in a suspension loop. She sits upon a scroll enamelled in green on the front, and in blue and black on the reverse. The sickle-shaped blade of the toothpick is engraved for the application of enamel, which is mostly lost, but is black where is remains. Ornament between the handle and the blade is enamelled in blue, red, white and green. The toothpick is set with two rubies and one diamond, all table-cut. Nuremberg in1562. The Victoria & Albert Museum

Of course,only members of the upper class could  have and order things in such a style.  They attracted eminent painters, engravers, sculptors to create sketches for goldsmiths. And, it is difficult to find in the history of jewelry a period when an artist and a jeweler would be so close in the partnership of the production. Perhaps only in the modern era the «pure» art has turned again to the craft and has appeared «design».

It is interesting to look at drawings and engravings , sketches of jewelry in this context. Perhaps there is dawn of the profession jeweler-designer.
The extant works show that Mannerism was not far decadent style, like a long time it was considered. But the very decorative, fantastic, extravagant way of art, in which it has gone to a meeting for Baroque.

«The dazzling magnificence». The Review of book. A History of jewellery. 1100-1870. By Joan Evans.
The origins of design. The story of applied art. by R. Rosental, H. Ratzka.The review.