The brilliant epoch. Jewelry art of the XVIII century. Part I 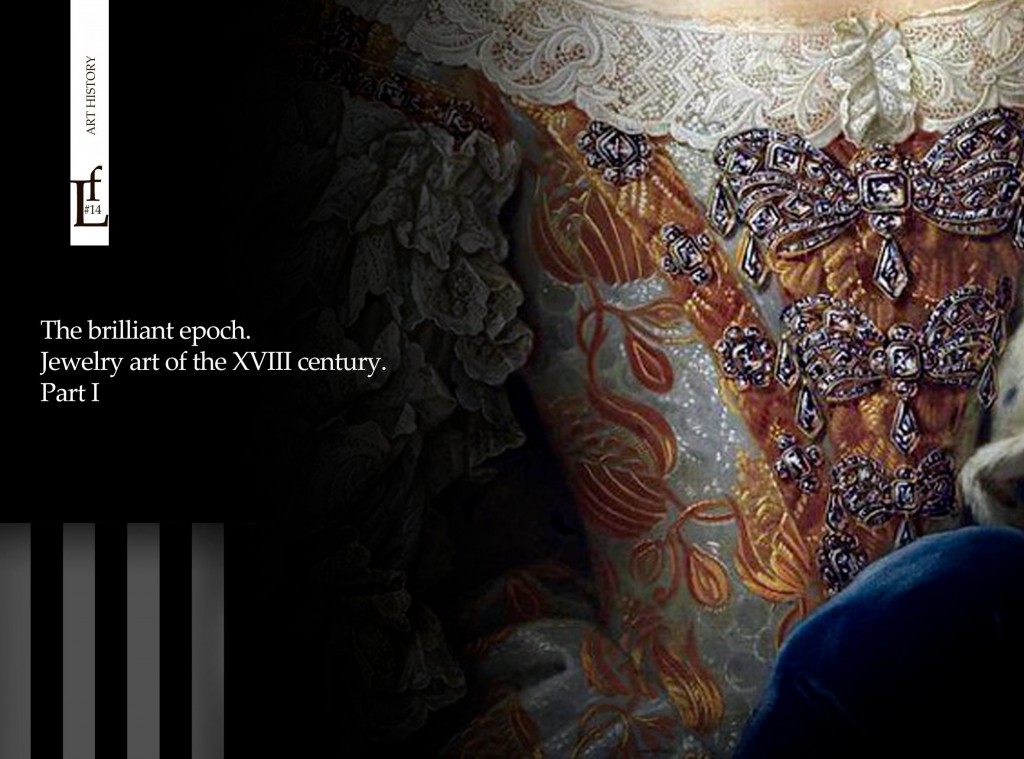 When is there the light of hundreds of candles, diamonds flash, rubies and spinels gently flicker, sapphires and emeralds contrast with them with the cold brilliance. The precious stones, skillfully inserted into gold and silver, like the stars, sometimes the whole constellations shimmer on the surfaces of heavy silk, rich velvet and finest lace. 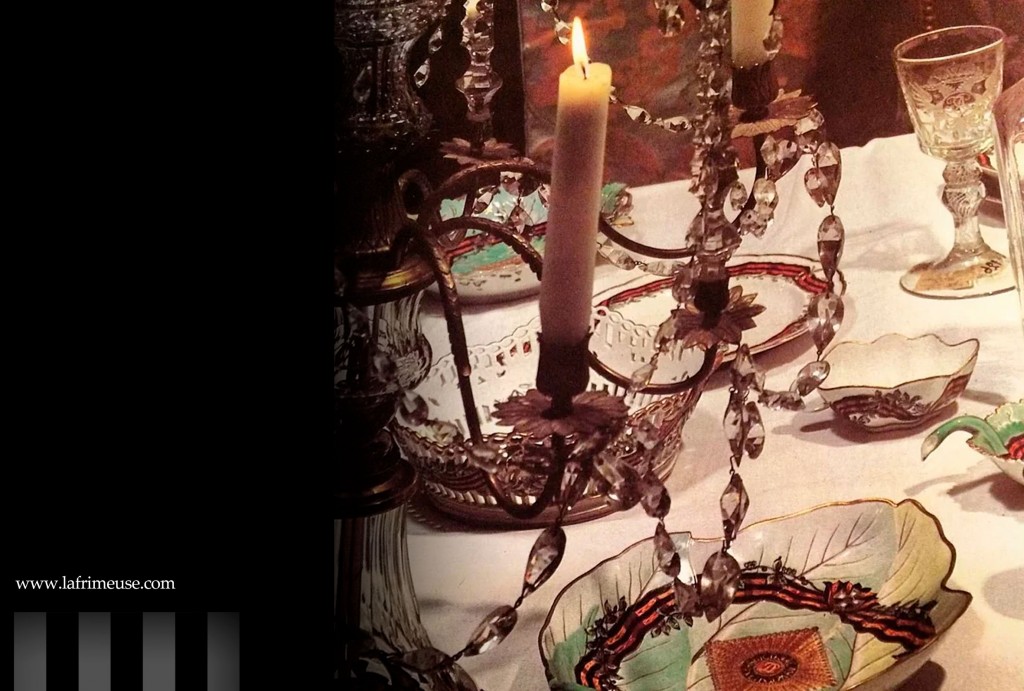 All of this is repeatedly reflected in the mirrors of a curved shape creates a fantastic atmosphere of solemnity and lightness, pretentiousness and sophistication, narcissism and sensuality, whim and charm.

This painting is being depicted not by only imagination gathered impressions from archaeological or archival documents. We have other witnesses of that subtle tastes and elegance.

“Dazzling magnificence” – so we could call the works of jewelry left us by the eighteenth century. 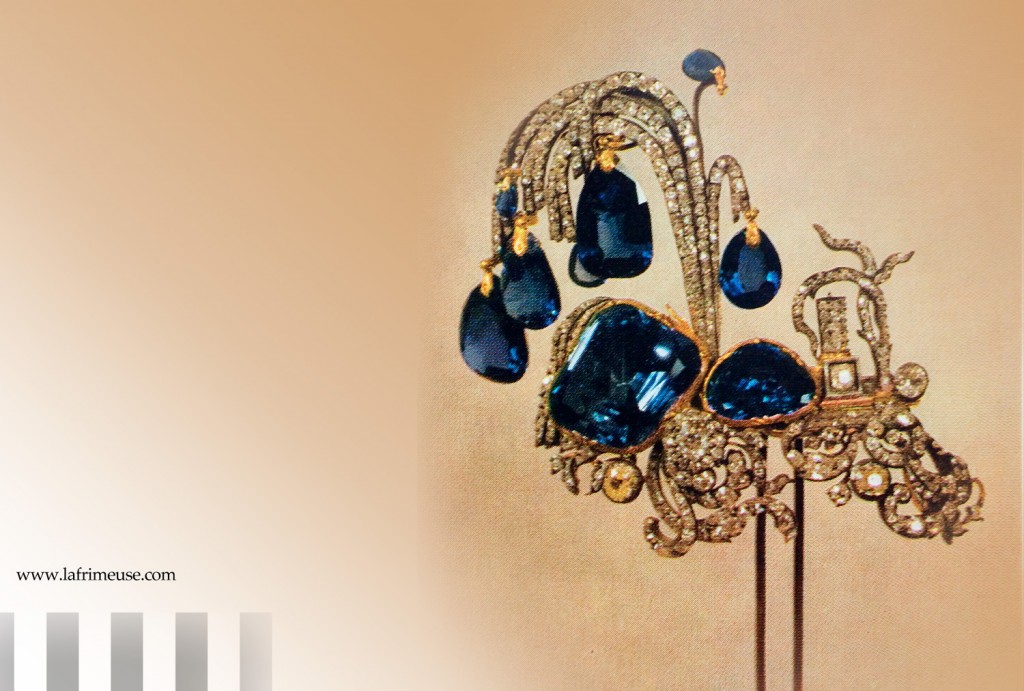 At the end of the 17th century, a Venetian cutter named Venetiano Peruzzi developed a new type of diamond cut *. (* At present, there are doubts about the uniqueness and name of the creator.) The basis was an accurate geometric calculation that takes attention to the optical properties of the stone. The diamond cut allowed two-, three-, sometimes multiple passage of the light beam through the stone, which gave an amazing effect.

It seems like a fire hidden for many centuries in crystals, has finally burst out and illuminated the century, which is rightly called the “diamond epoch”. 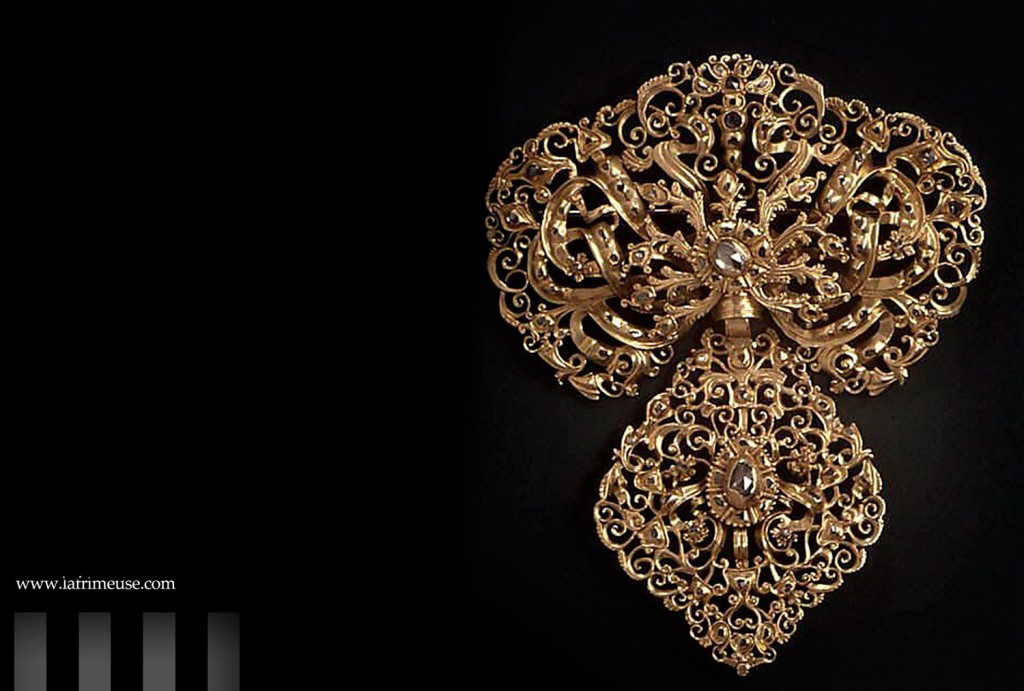 The discovery of Brazilian diamonds in the 1730s flooded European markets with them. (Previously, there was only one  diamond field in India, which has exhausted after 1600).

The most expensive stone, previously accessible only to the ruling monarchs and the aristocratic elite, now more and more often goes into the hands of prosperous bourgeois. 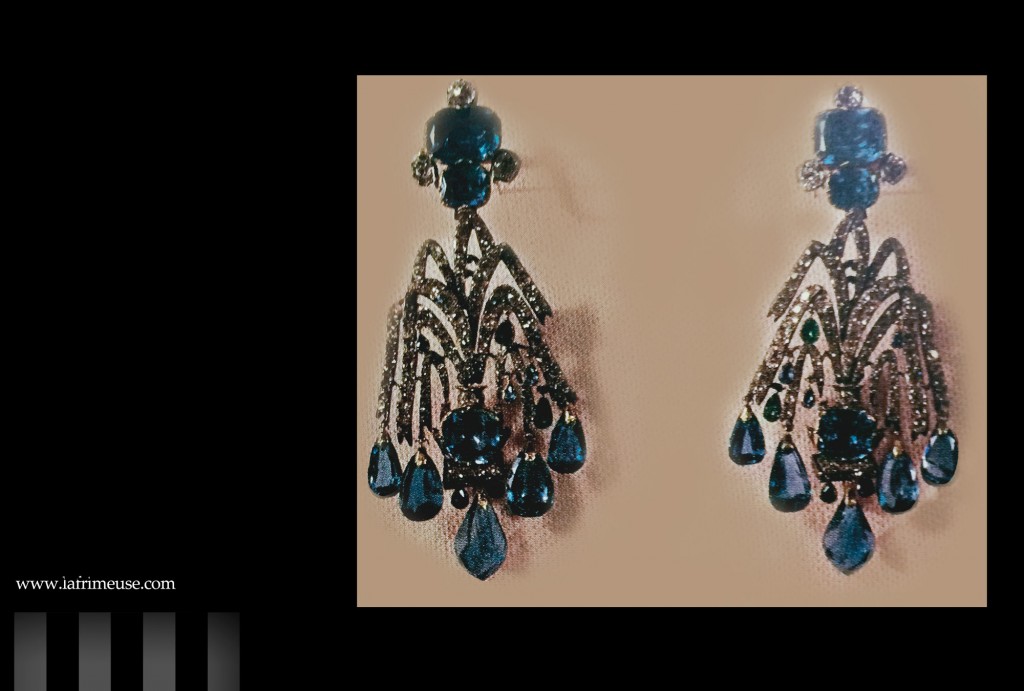 The functions of jewelry were changing, they weren’t only an expression of wealth, prestige and nobility anymore. The jewelry became the aesthetic objects and some integral part of an costume. Women’s magazines of that time prescribed fashionable women, in addition to certain clothing options, jewelry additions and accessories. In addition to the traditional jewelry (earrings, pendants, brooches, etc.), there were the real examples of jewelry were buckles, clasps, buttons, corsage sets, and hairpins for hat fields. 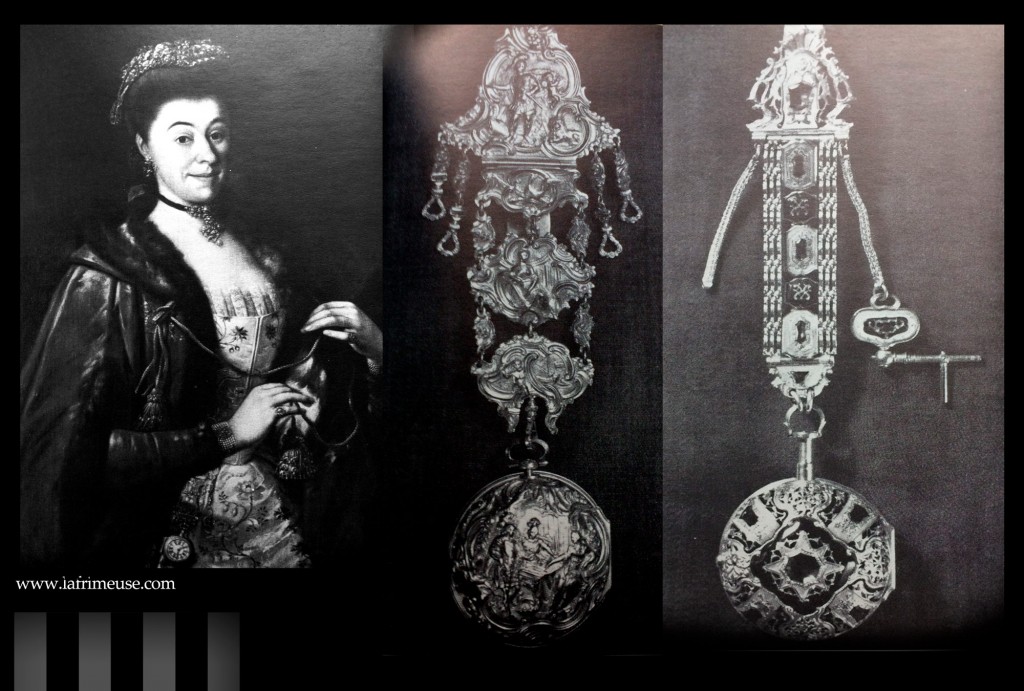 Entire diamond placers covered the watch case, sparkling and sparkling with every movement of its owner. 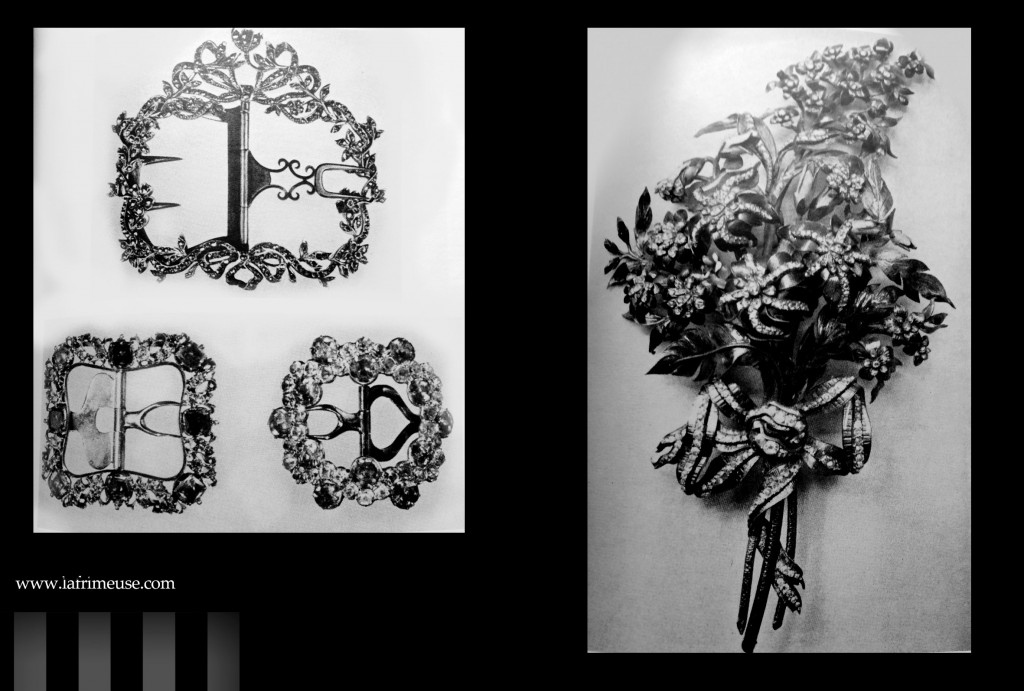 A great achievement of the 18th century was the invention of imitation of precious stones, the so-called rhinestones (fr. stras, the name comes from the inventor J.F. Strass, a Parisian court jeweler who worked in the 1730s. He founded the store, which became the leader in the distribution these artificial stones) This marked the beginning of the creation of bijouterie. Products from glass imitations and semiprecious stones were popular even among the most noble fashionistas. 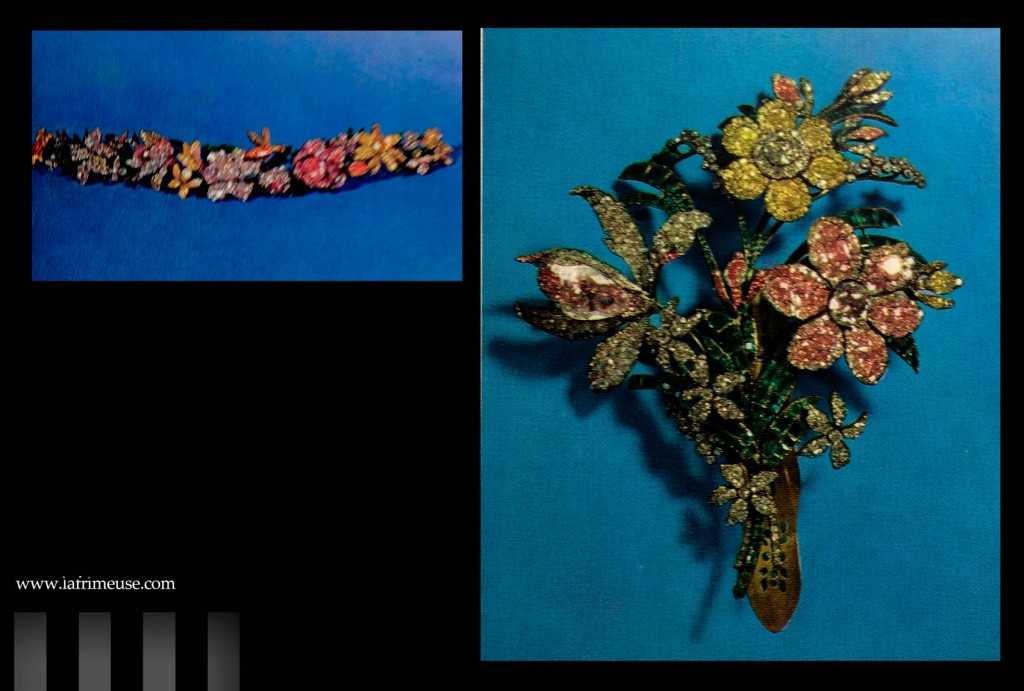 The use of inexpensive materials allows  jewelers to follow the capricious fashion quickly. Many details of costumes and jewelry changed under the influence of the tastes of numerous favorites of the then monarchs. The most famous legislator was the Marquis de Pompadour. 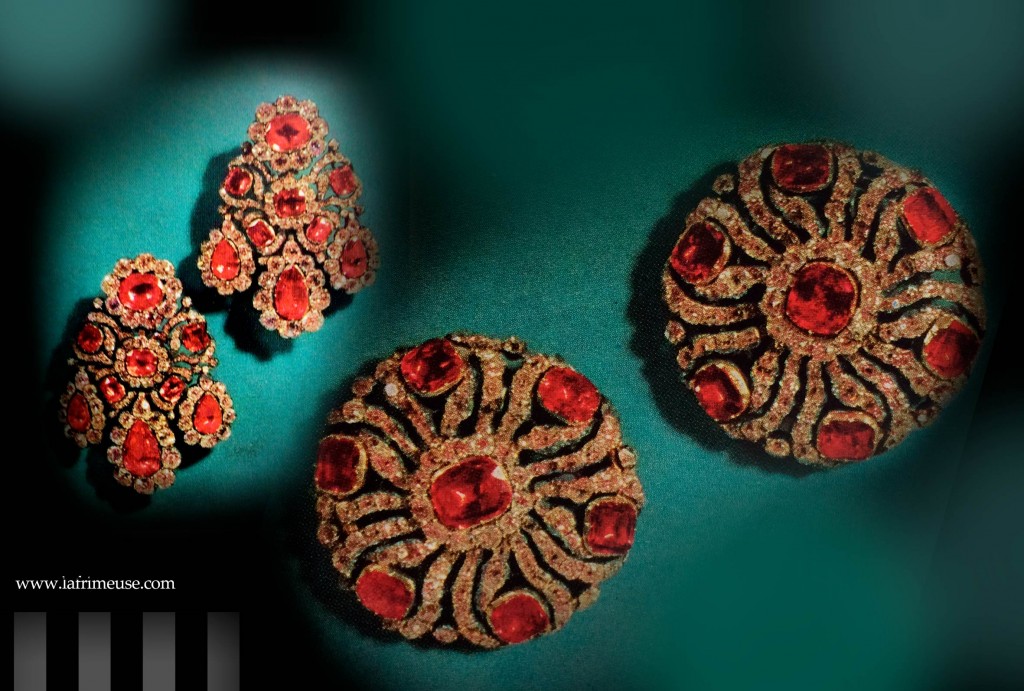 Mostly her tastes reflected the artistic direction of the first half of the 18th century.

Rococo was the decorative, fragile, sophisticated, somewhat mannered and sensual style , it is in the applied art that is shown in full force. Jewelry has never seen such splendor. 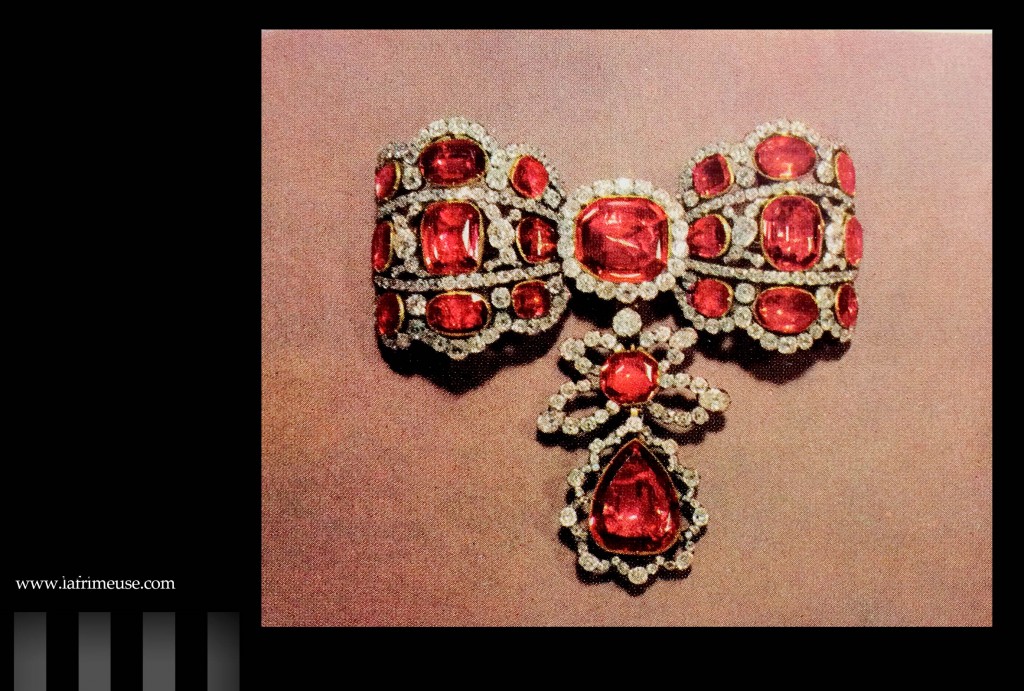 Masters seemed to compete in the pretentiousness of compositional, color solutions. Asymmetry and colorfulness reigned in everything. The curvilinear outlines of the rocailles gave to these works high degree of fine art, chef-d’ouvres in miniatures. They perfectly combined with gems and colored diamonds, which were picturesque accents of products.

In France, by the middle of the XVIII century, a combination of three colors of this precious metal was in fashion. 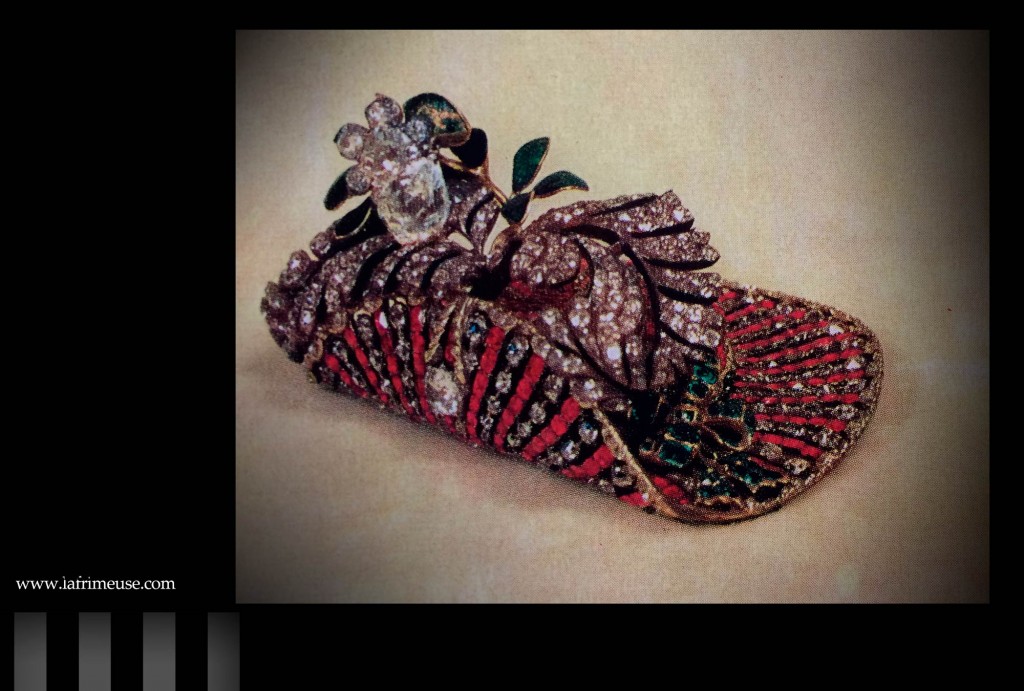 The Enamel relief technique was a great success; depending on the depth of the layer, transparent enamel gave excellent gradations of color saturation.

Around 1750, a guilloche machine was invented for mechanically applying a repeating pattern of lines, circles, etc., which greatly facilitates and accelerates the work of a jeweler. The passion for the original and the exotic in the first half of the 18th century was manifested in the use of non-traditional materials. Tortoise shell and mother of pearl have become favorite jewelry items. It’s all allowed the masters to achieve new effects in their work. 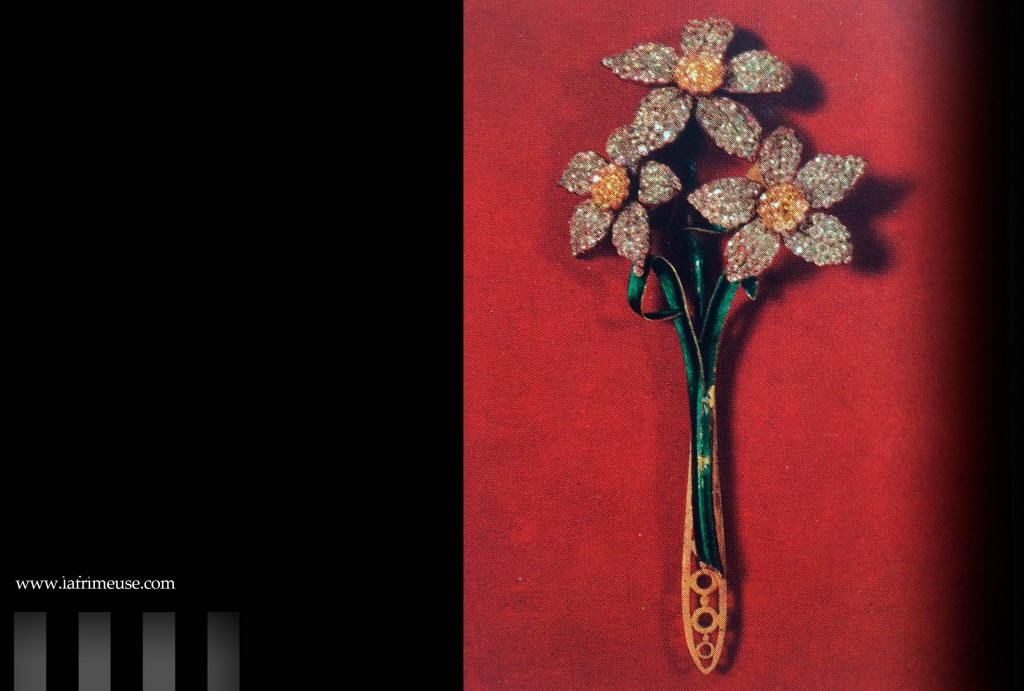 By the 1750s, the desire for pretentious forms gave rise to a certain overload of compositions. The style of early classicism began to dominate. Increasingly  mirror symmetry was replacing, shell-like forms disappeaed. There was a desire for the rhythmic alternation of repeating elements, where geometric forms dominate, and vegetable ones are strongly stylized. 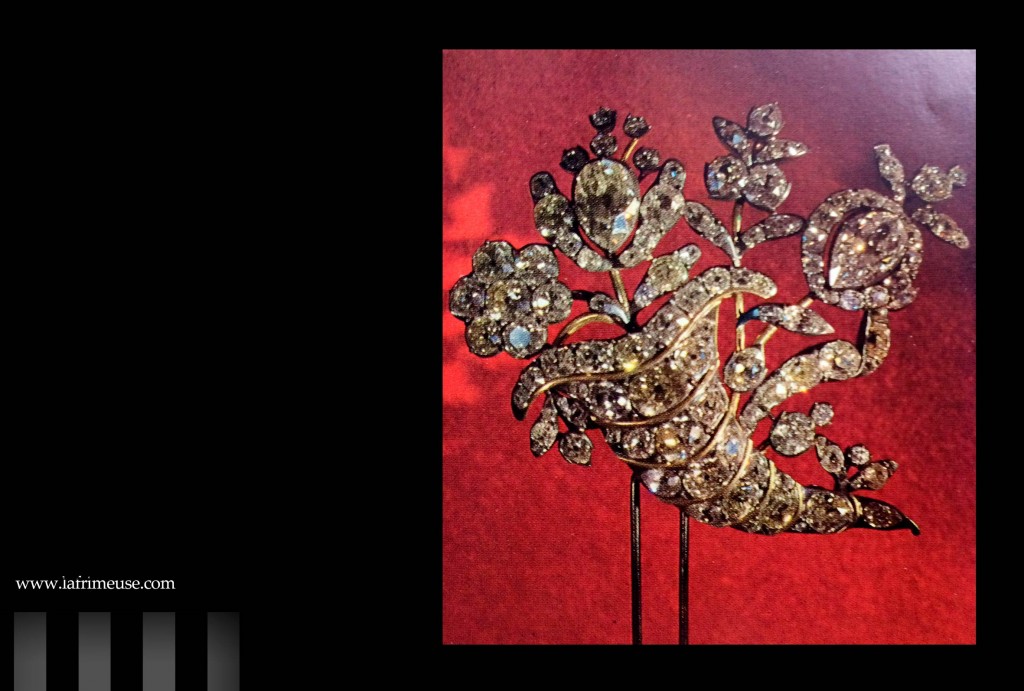 The achievements of jewelers of the second half of the 18th century in the field of sculpturing, in the art of stone cutting, metal processing, in the creation of strict, but lacking excessive dryness of compositions, served as role models for many jewelers of subsequent generations.

continued in the second part.

Ford vs Ferrari. Review of the film
David Hockney’s rare painting “Nicolas Canion” will be exposed for selling $ 35 million