Aesthetics of Petersburg’s yards or about Paris once again 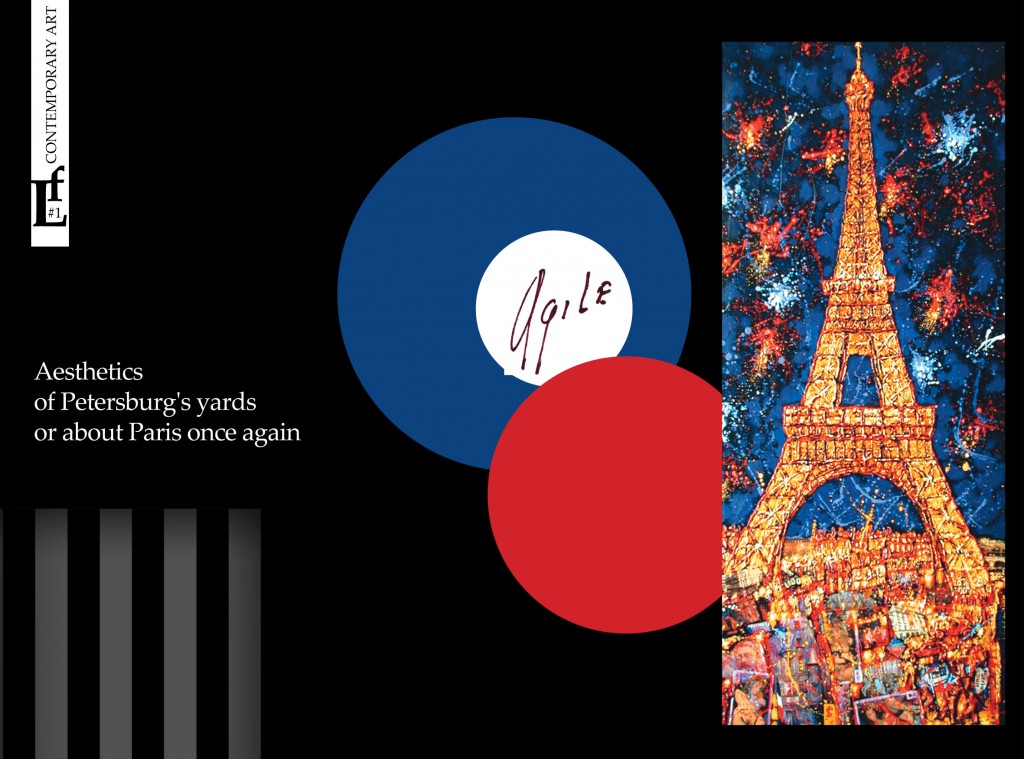 Once upon a time I worked in a glossy magazine, I tried to promote my own project, a series of articles of St. Petersburg’s artists. One of the first materials, was dedicated to the painter Agile (Georgy Telov, p. 1967). Petersburg and Paris were the main themes of his paintings. Two cities. Two worlds. Two special perceptions of life. It was a long time since then, but subjects about  the nonchalance of the French capital and the restraint of the mystical city of Russia are probably eternal. Therefore, the article is repeated almost unchanged. 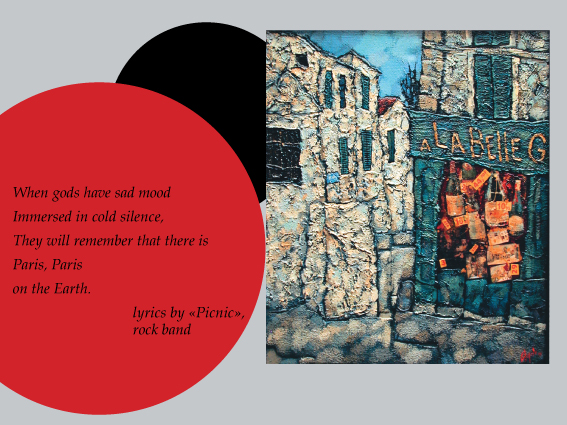 There is some powerful attractiveness in the word “Paris”. This city, in the view of many, an endless celebration of life, kaleidoscope of the most joyful experiences, the place where life is easy and carefree, where love is brignt and youth is eternal. 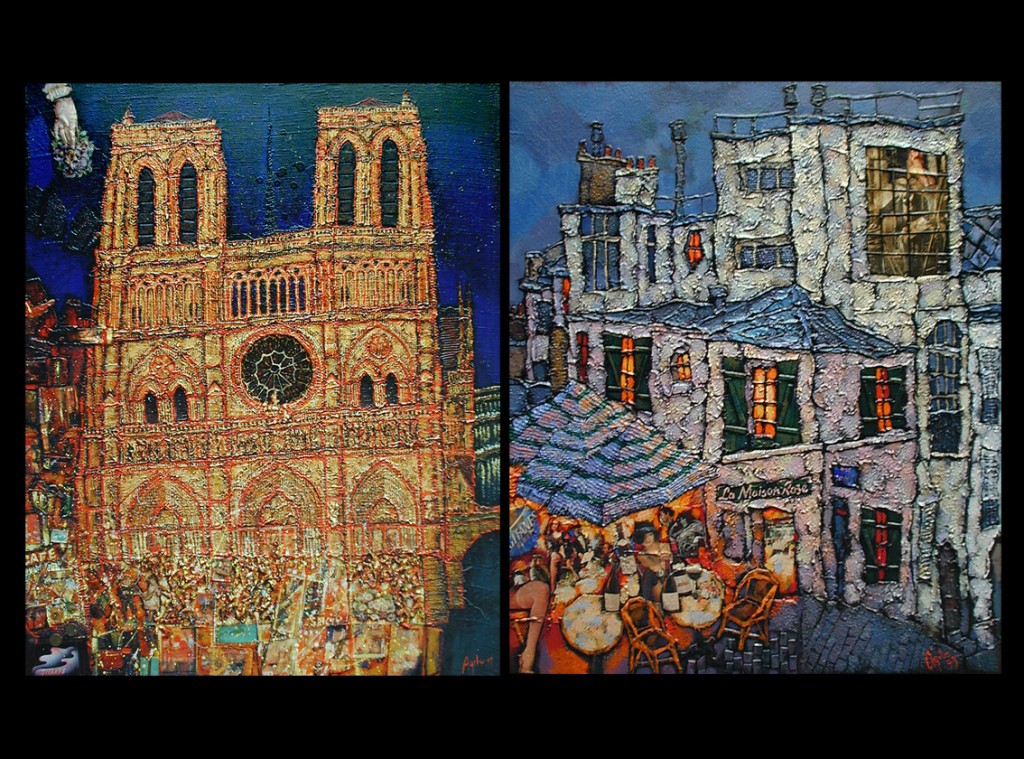 The Saint-Petersburg’s painter, Agile ( as he had been called, when he lived and worked in Paris), confirms the general opinion of the capital of France by his works.
His Paris is full of light and color. 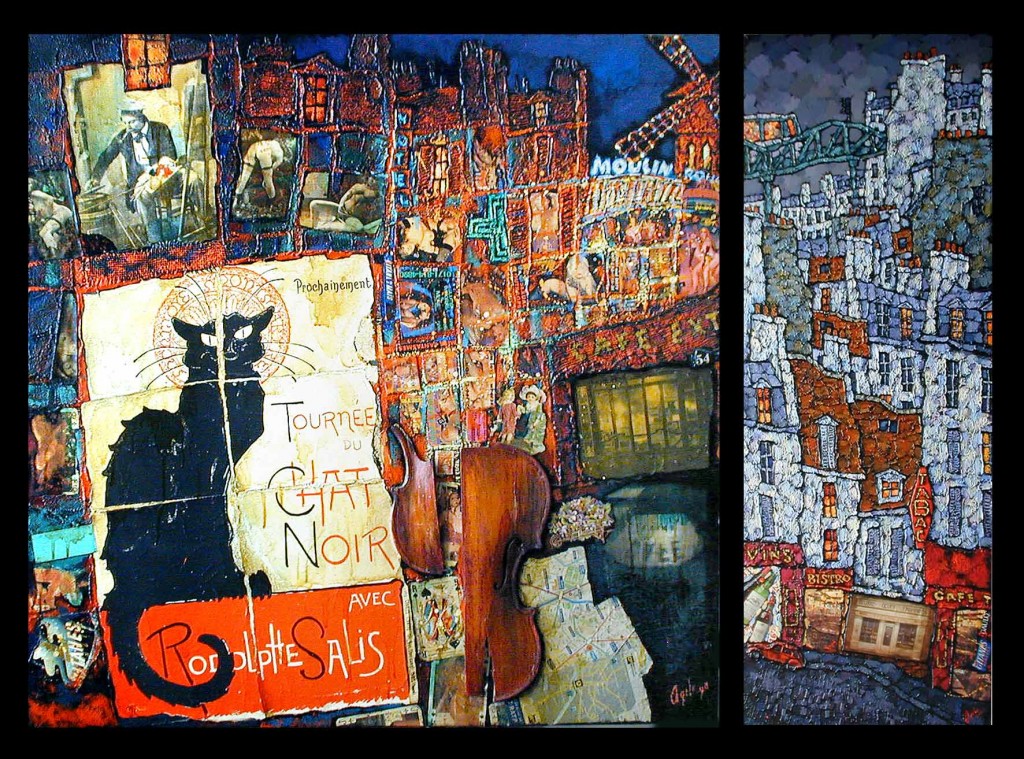 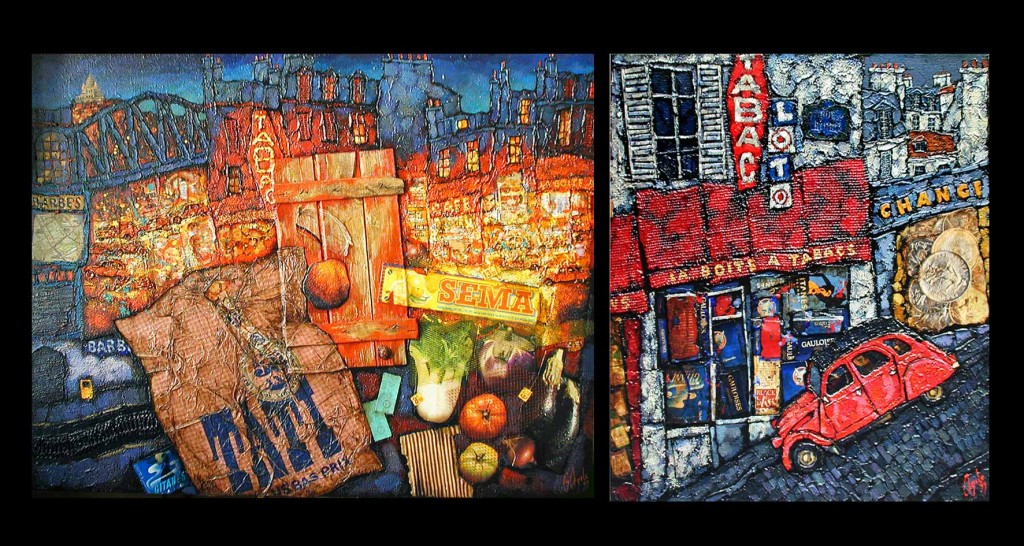 Petersburg, on the contrary, was depicted by the graphic and relief means. The artist’s distinctive technique is a relief, sculptural painting or one can say, picturesque graphic. A canvas is primed uneven, special volumesare creared and the image comes to life, largely due to the form, then by color. 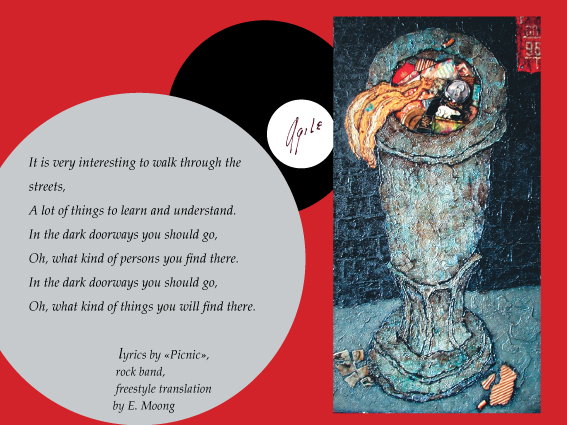 The favorite technic of artist is collage. He give us some feeling of the irony and sadness and pain. The decorativeness presents even in urban manholes, garbage cans and urns. At first it seems something attractive, and only then looked more closely, one can see our ugly reality. Sad … But we are  arranged by a such way, we like when the our hearts ache. 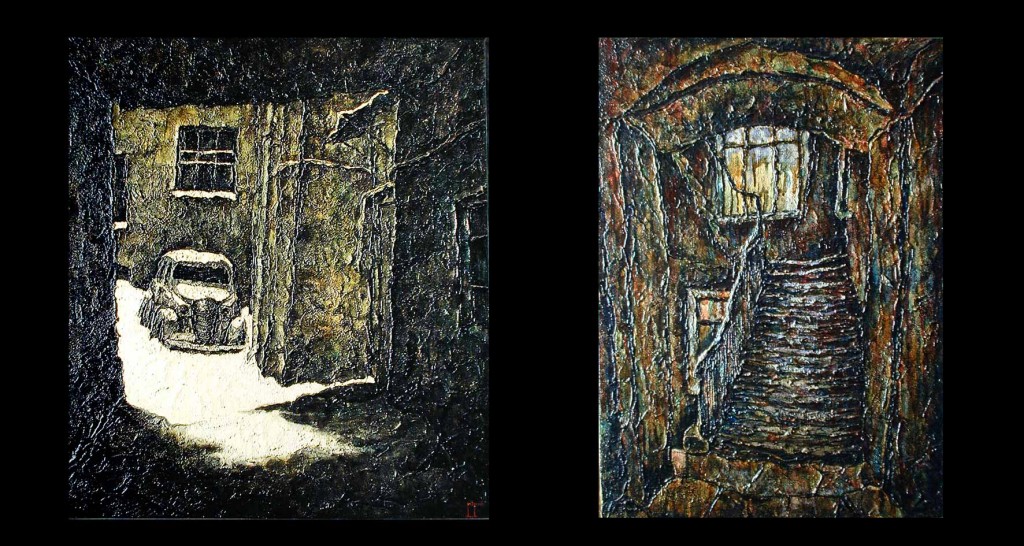 Petersburg is in his works, not for postcards, not for tourists, not at all cultural capital. There are something personal and deeply loved in these doorways, arches, in courtyards, abandoned cars on the background of brandmauers. We yearn, namely, about a such city when we are far away. Saint Petersburg has a little color, but a lot of texture. On belief of the artist, the best atmosphere of the city, is always passed through the graphic. 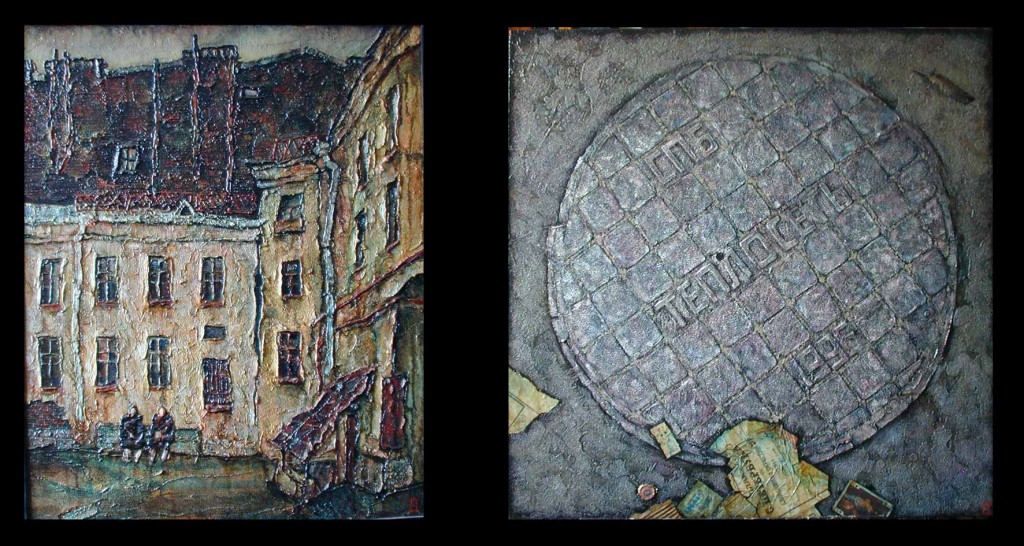 Two cities and two perceptions of life.When we are in Saint Petersburg, we are longing to escape to Paris, to immerse into an illusory world where it seems always easy and relaxed atmosphere, but where we live in Paris we feel the urgent need for a broad panorama of the Neva’s banks, wet Baltic air, legendary yards – wells and dark doorways of the city, where we can not feel ourselves carefree same as in Paris, but also relaxed. 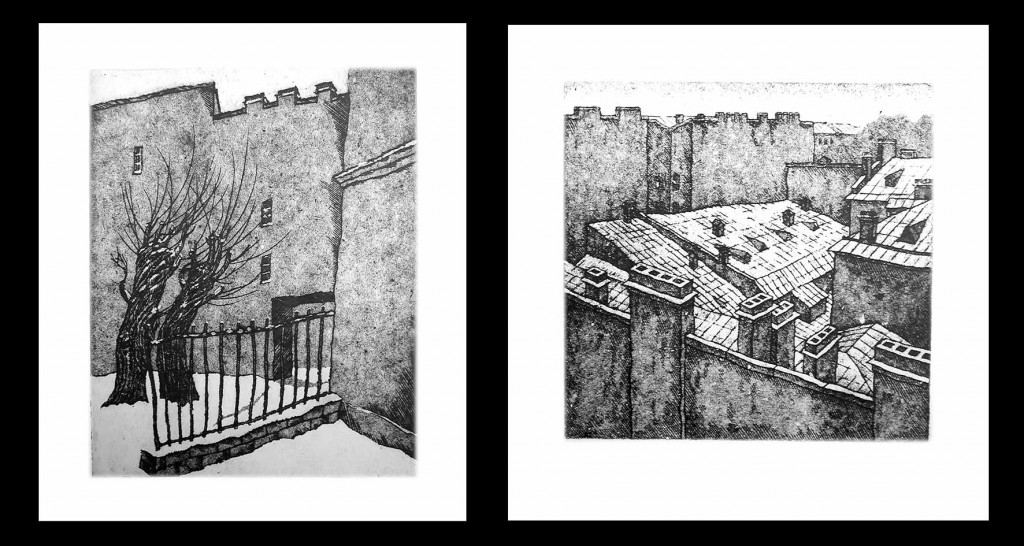 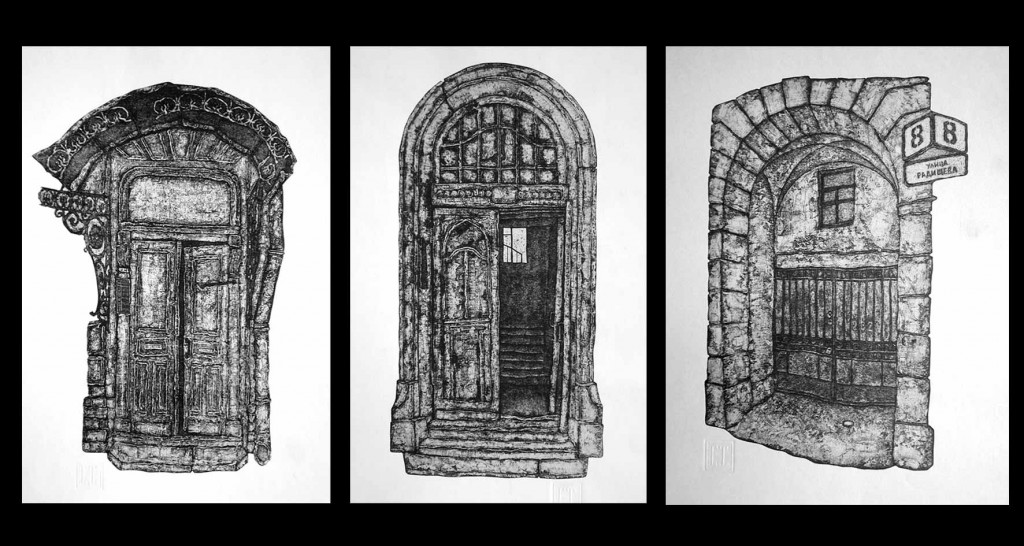