The H8full 8 by Quentin Tarantino. No one comes up here without a damn good reason 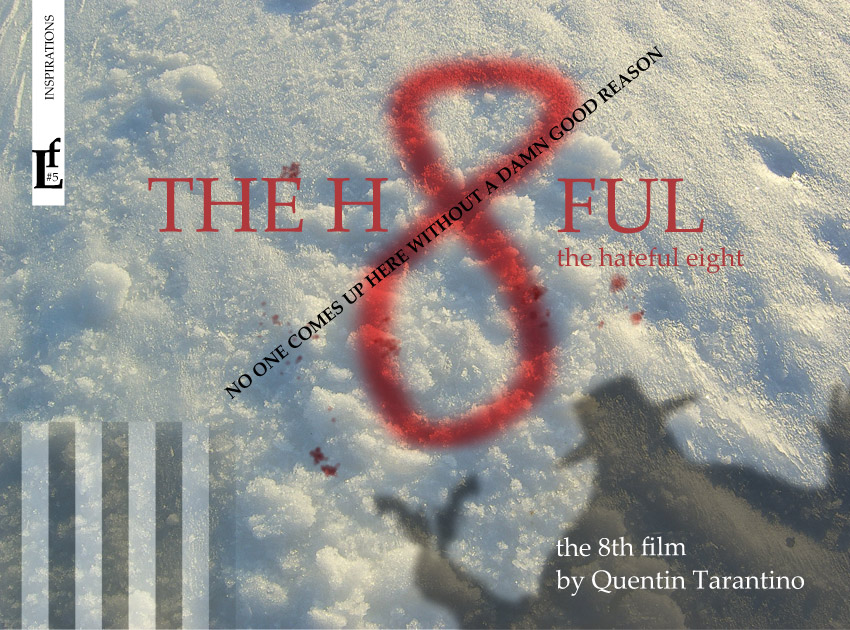 No one comes up here without a damn good reason. It’s the tagline for the new film by Quentin Tarantino.«The H8full 8». There is the game from the begining. Starting with the name. Hateful eight. We hear «eight» in the word «hateful».

Juggling by stamps, all kinds of clichés, he mocks them. Tarantino, as the artist-postmodernist, he creates a masterpiece of the mix of trivial things. But each of these details are thought out and put in place. In general. So, if you like Tarantino, you understand me, if not, it may be now is the time to see his movie.

The beginning of this large-format history (the film was made on 70 mm film, but about it later) is a beautiful snow-white expanse. The operator gives us enjoy the views of the sparkling snow and the outlines of the mountains of Wyoming. Watch and remember, this clean sheet, оn which will soon be the fate of each character will be written by bloody paints.

Like a book or a theatrical spectacle Tarantino divided this performance into chapters. Firstly, Getting to know the characters, notorious scoundrels. Further, the of the detective story. The culmination. The outcome.

The advent days of the Wild West, five or ten years after the Civil War.  Eight people cut off from the world, wait out a snow storm on a mountain pass in the small tavern. There are conflicts converged between whites and blacks, between southerners and northerners, between notorious criminals and bounty hunters. But there is everything far from ambiguous. Lies and betrayal reigns around.  Everyone pretends to be another person. It isn’t easy  to be notorious villains, especially among the same. Tarantino plunge us into emotional dialogues which  reveal as abscesses the human vices of all kinds, and you do not even notice that the action takes place in the same room. Snowstorm sweeps outside. Nature has swept as a janitor  the dirt in the most godforsaken corner where all ungodliness destroys itself. A western, a thriller,  a detective, a parody?  It doesn’t matter. You are guaranteed to get the wild mix of drive and promised trash.

Cast: Samuel L. Jackson, as always cool and unruffled, Kurt Russell – you have not seen him in such a role. Further, taciturn cowboy Michael Medson, Walton Goggins is catty sheriff, Channing Tatum is a leader of the criminal band, appearing on three minutes  and disappearing from the frame, losing his head.

Black humor, here it is! You will laugh and be horrified by the film at the same time. Each character will receive deservedly as a result. And all this is added by a completely magnificent music of Ennio Morricone.

The film made on a large-format film. It’s rarely used format. Why  did Tarantino use this technology? As the creator said, 70mm best suited for shooting not only dramatic prospects  in open spaces, but also for indoor scenes.

No one comes up here without a damn good reason. But  you have it. This is the new Tarantino’s film.

art, inspirations
Quentin Tarantino, the hateful eight
Artists and theatre. Part1. Leon Bakst
The favorite images of childhood. The unique travelling into the world of the book «The three musketeers» with the artist I. Kuskov