The exhibition of Ilya and Emilia Kabakov. Not everyone will be taken into the future 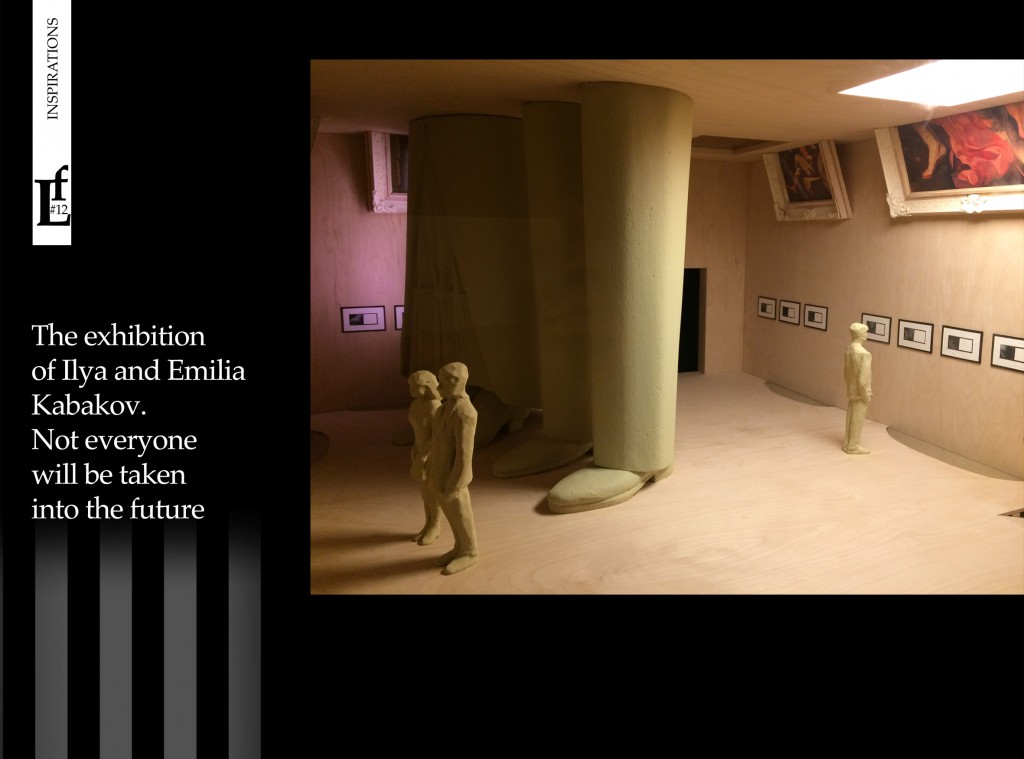 Have you ever wondered what will remain after us, a trace in art, in science or in the memory of our loved ones, whether memories of our life will be handed down from generation to generation, and your things be carefully kept as a family heirloom. Whether you wanted to find freedom and happiness, having escaped from your close world, stumble upon white little men, or did you have the idea to wander through the maze of someone’s memory, and finally meet your angel. Perhaps such ideas never occurred to you, but it is all the more interesting to become a spectator and even a participant in the invented, albeit strange, but curious, fantasy world of Ilya and Emilia Kabakov. 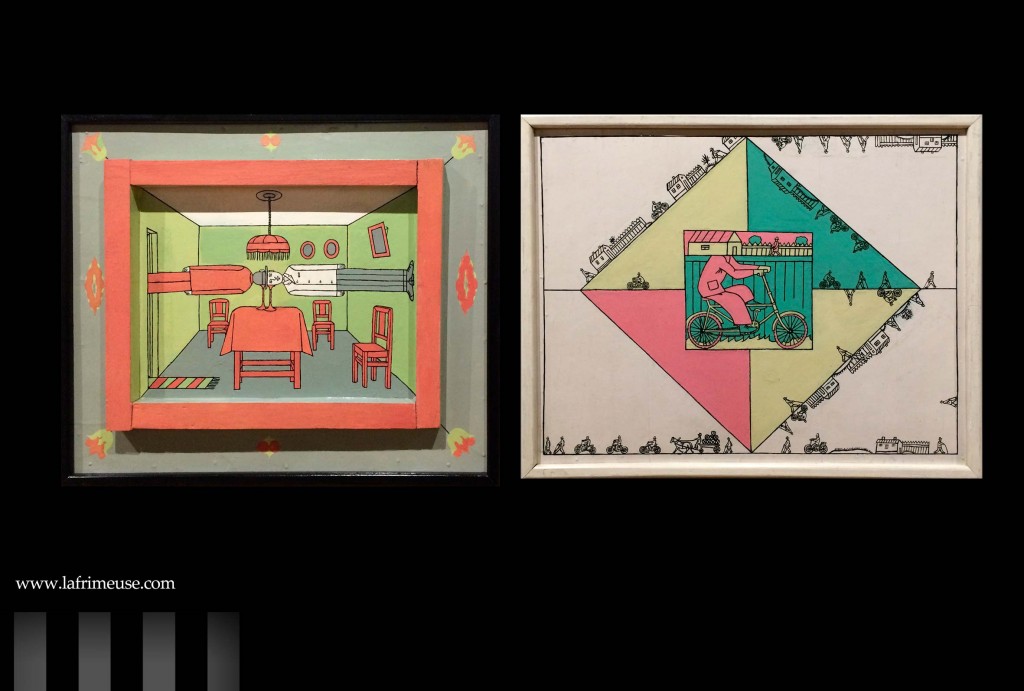 A large retrospective exhibition, to the 85th anniversary of Ilya Kabakov, was held at the Tretyakov Gallery, where the most significant installations of this creative and matrimonial union were collected. 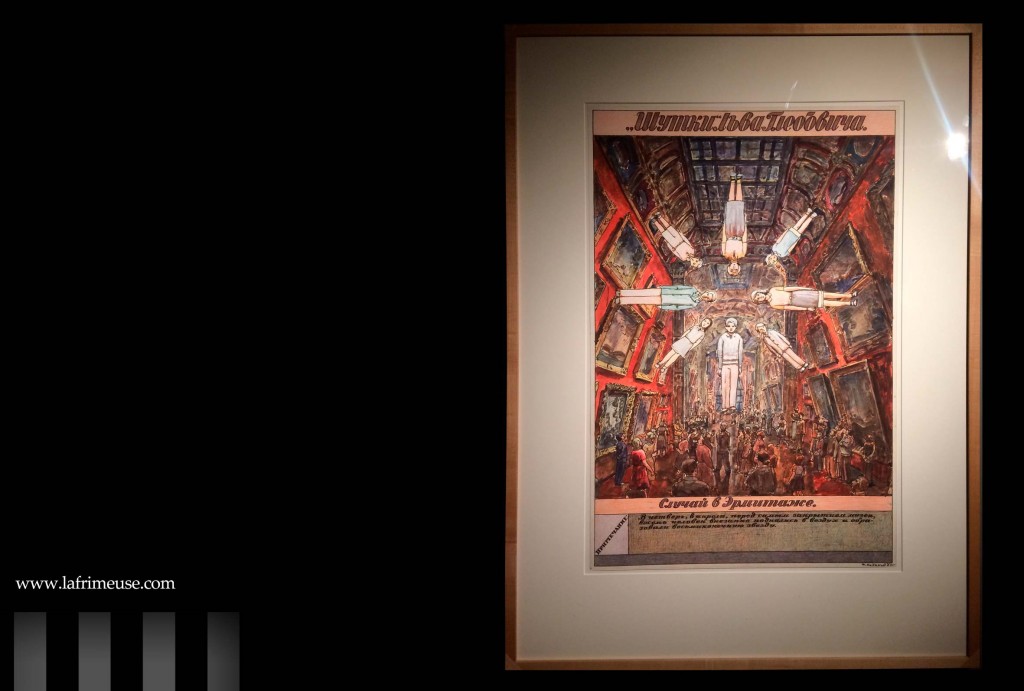 As conceptualists, the artists used not only visual techniques but  music, light, texts, descriptions of ideas, entire stories, like personal diaries of fictional characters, their things, objects, to create a special atmosphere.

The exposition is divided into conditional rooms. There are the early works of Ilya Kabakov in first of them. But the subsequent spaces are even more interesting, the most significant installations are recreated there. Compositions in which you are, of course, the viewer, but objects surround you and draw down. And here you are already in a cramped room, pasted over with posters, in the ceiling there is a hole, from where light shines. Under the hole there are catapult tensioned cables. Scattered things, drawings, everything is covered with peeling plaster, everything indicates that a person lived here. 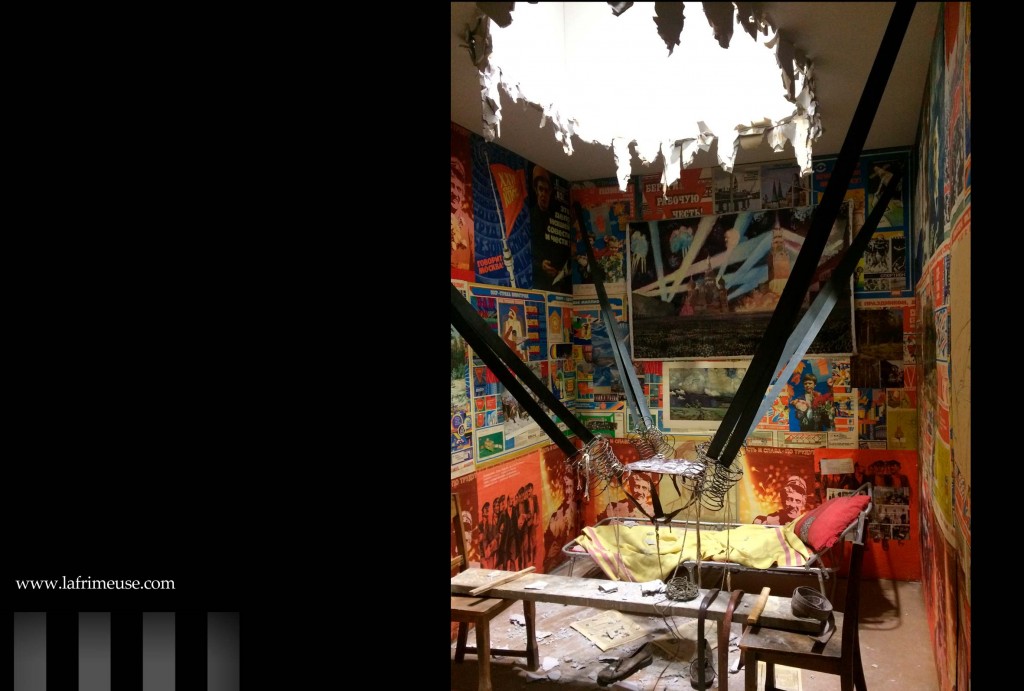 “A man who has flown into space from his room” is an installation, first of all about a dream and freedom.There are the posters about the cosmos, drawings on the walls , it is clear that the owner of this dark corner was preparing and was obsessed with his dream. 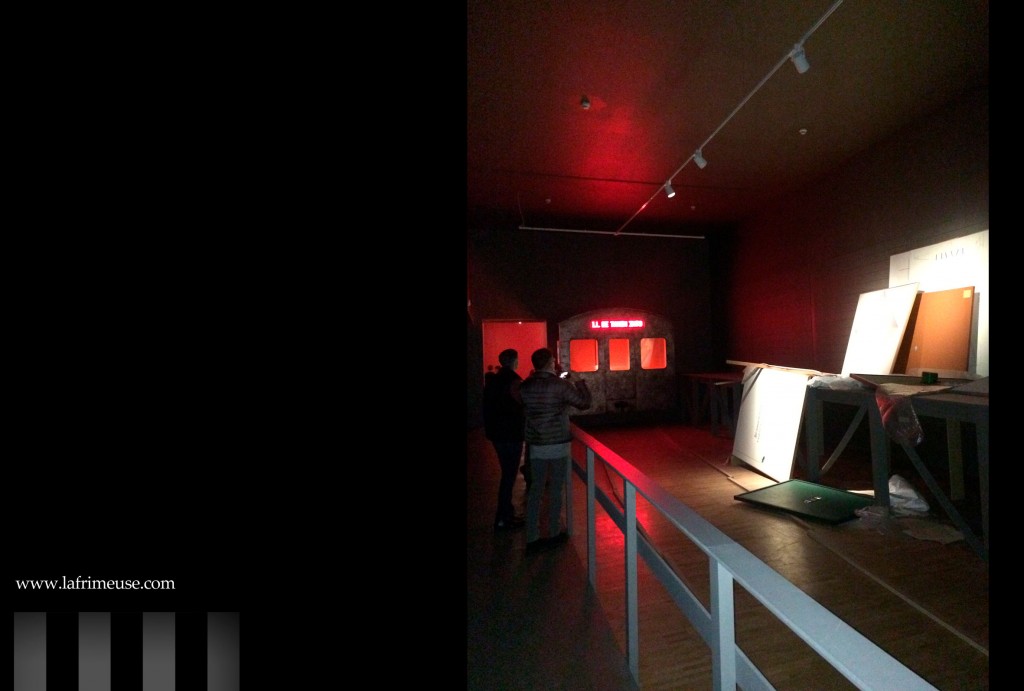 “Not everyone will be taken to the future” – these are the philosophical reflections of the authors, what will happen to our creativity, work, heritage. It will be forgotten, as the pictures left on the platform, a departing train in the distance, on which the running red line signals to passengers, who left behind the departing transport of , “Not everyone will be take  into the future” … or will a project of all your life live?

“Empty Museum”is a room that recreates the atmosphere of a classical museum. Brown-red walls, with light spots projected to where the paintings should be, in the middle there are typicall museum sofas for visitors. An advertisement written with a pen “The administration apologizes ….  it is  been stabed behind the door’s panel. The room is filled with Bach’s music. As Ilya Kabakov describes his idea “… the presence, the need for music in the“ museum” is directly related to the absence of pictures on its walls, this emptiness on the walls is directly and naturally connected with the fullness of the space with music”.

“Labyrinth” is an installation where endless narrow corridors with black-and-white photographs of the city of Berdyansk and yellowed sheets of paper printed on an old typewriter with excerpts of the artist’s mother’s memories. Sad, dark and there is no clearance ahead. 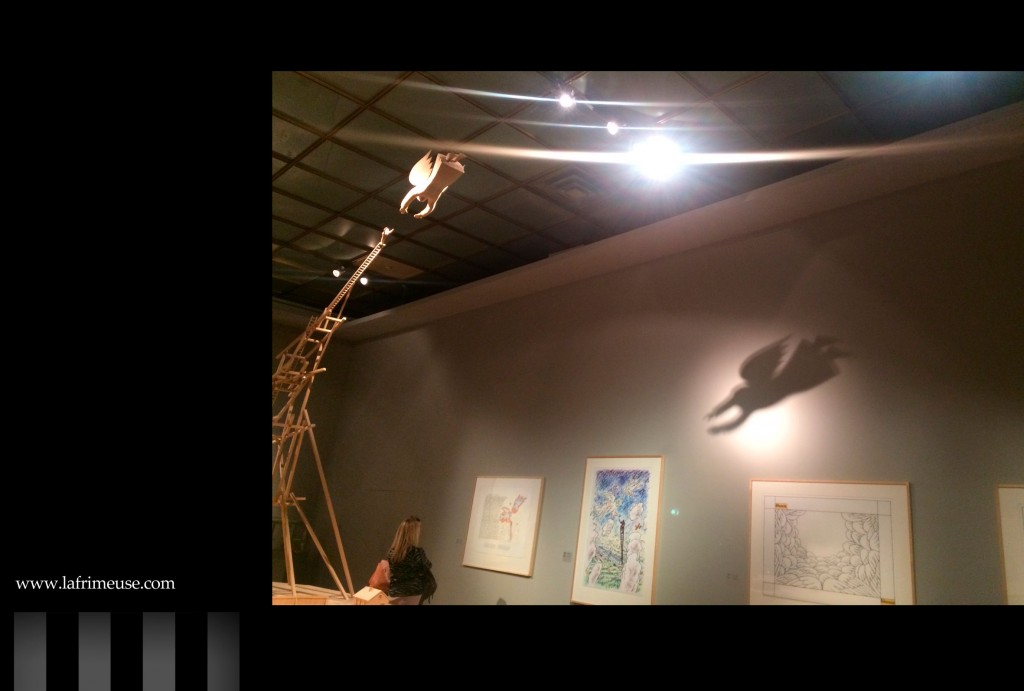 The last room is devoted to the idea of “How to meet your angel.” According to the artist’s idea, it is necessary to find a place, preferably outside the city, to build a 1200 m staircase and climb it. If you need this meeting, it will take place. 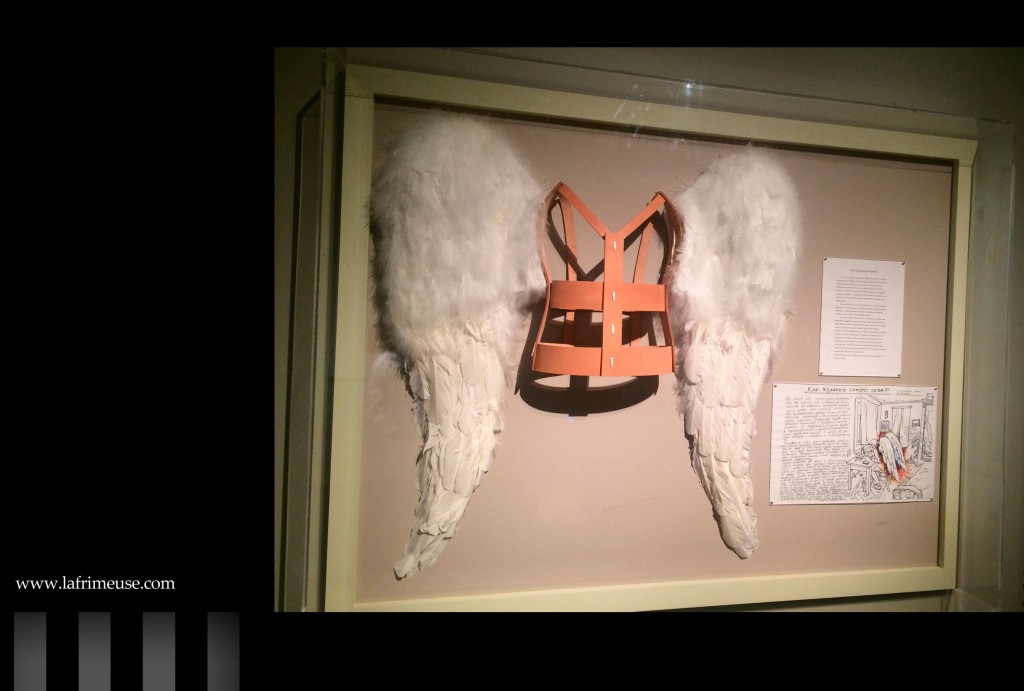 As in my past reviews, I described what emotions I expect from visiting exhibitions. This is an energy exchange between the viewer and the artist, this is a message that make you return to it one again , and, finally, captured inspiration. 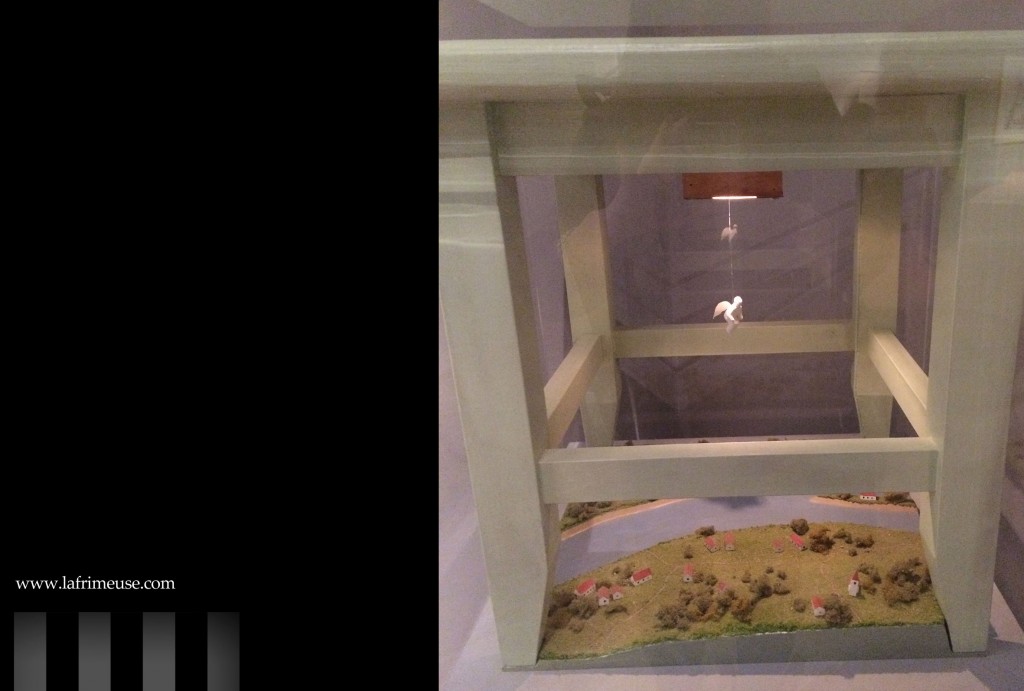 Once I also tried to create something like an installation in my father’s garage, a robot from cans and old, for some reason kept capacitors, various “pieces of iron” that had accumulated there over the years. Ah, the robot was wonderful, but it wasn’t possible to “revive” it as I wanted. Disappointed, I threw the poor man. And now, after years, it was here at this exhibition, I realized something, perhaps I will recreate my garage installation myself. Let the “Abandoned Robot” be a monument to all those who were left, placing unrealistic expectations on them. Let us love people for what they really are. Take your memories in the future.

When design inspires #13. Glithero. Domino lamp
Green book. When the movie is not only worth Oscar