There, where deities dwell. Tibetan Meditational Buddhist Art of Buryatia. 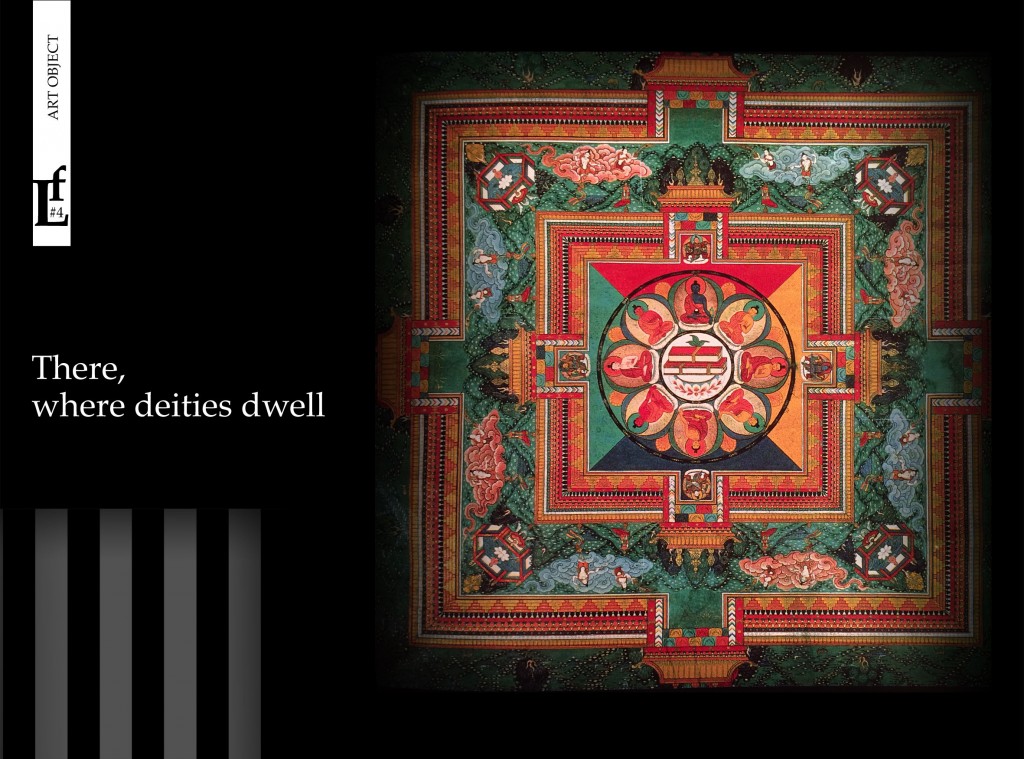 Ancient Buddhist art seems to us than the mysterious and mystical. It seems that this applies only to Tibet, Nepal, China and other Asian countries. But the unique traditions of Buddhist art there and in Russia as well.

Russia is a vast country, everybody knows it. But when a mention of Siberia occurs , not even every russian citizen can say without any hesitation, what lands, nationalities and cultures are there. In eastern Siberia, in the “country of taiga”*where the sacred Lake Baikal keeps their crystal clear waters is the territory of the republic of Buryatia.

In the north it borders with Yakutia, and where thickets of taiga change over in the Arctic Circle,  in the south it neighbors with the State Mongolia where the steppes stretches to the horizon, hang back to ridges. And from where the severe Genghis Khan appeared in front of the world.

For centuries, nomads lived here. Their religion has long been shamanism. In the late 16th century, the belief of the Tibetan monks penetrated Mongolia,and then buryats accepted it. The widespread construction of Buddhist monasteries began in that time, which were being decorated by local artists, according to strict canons of religion lamas.

Tibetan educators carried their doctrine to different lands they had to travel a long way. In their wanderings, they prayed, meditated and converted encountered travelers  to new belief.

Every monk had the image of the deity, Bodhisattva, sacred symbols and mandalas. It was kind of the icons were painted with mineral paints on primed canvas, on a substrate and with a frame made of silk. These paintings were called “thangka”. From the Tibetan word “Thang” means flat and the suffix “ka” – means a painting or a image. Tangkas were folded as the scrolls and were comfortable for long journeys of  lamas with their educational activities and  the nomads, who had accepted the new religion, and took  the holy symbols of Buddhism for meditation and a talisman  for hikes and long parkings.

The large collection of buddhist paintigs are in the Museum of History of Buryatia them. MN Khangalov in the city of Ulan-Ude. 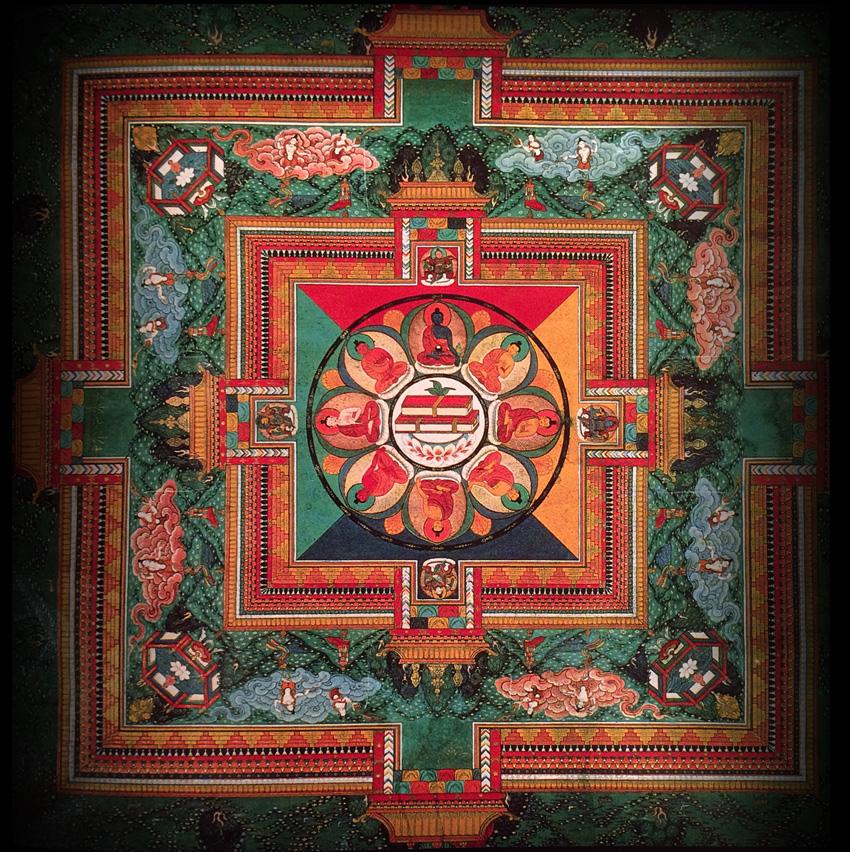 Today in the category “art object” – a tangka, the image of the mandala. In Buddhism Mandala  symbolizes the sphere of living deities, Buddha’s pure land. The word “mandala” literally means “circle”. But it could be in the form of a circle enclosed in a square like this.

Usually, the mandala has a center and four directions, they correspond to the cardinal points. This mandala is a square with each side of the T-shaped outlets, symbolizing the gates to  the Universe. The field of the square is divided into four parts. The fifth part forms the center. Each of the five parts has its own color: blue corresponds to the center, white – east, yellow – south, red – west, green – north.

In the center of the mandala – the book (nustaka), symbolizing of teaching (Dharma) of eight Bhaishajyaguru – Buddhas of medicine. 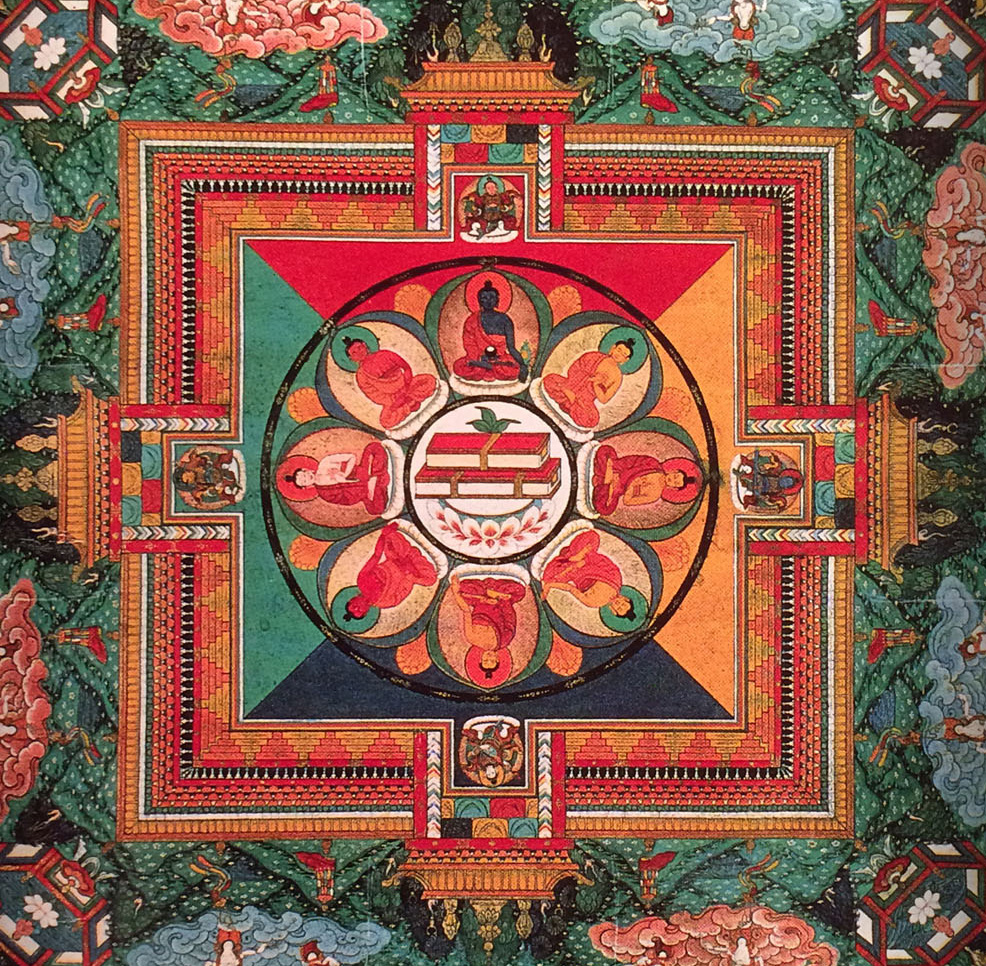 One can wonder how the artist applys paint. The first layer  is even color and then – an artist draws the outline and put gold leaf with the subsequent polishing of individual sections. The last stage he draws his eyes, which corresponded to a certain ceremony, “opening the eyes”. This is only done on a certain day of the lunar calendar.

Buddhist art was created in past and created now strictly by their canons. It is designed to read the doctrine of certain elements to calm the rhythm set to reflection and meditation. You can catch yourself in thinking that the correct geometric shapes, pure color, without any tints purify the mind from unnecessary thoughts and make possible the focusing on the pure knowledge of the world.