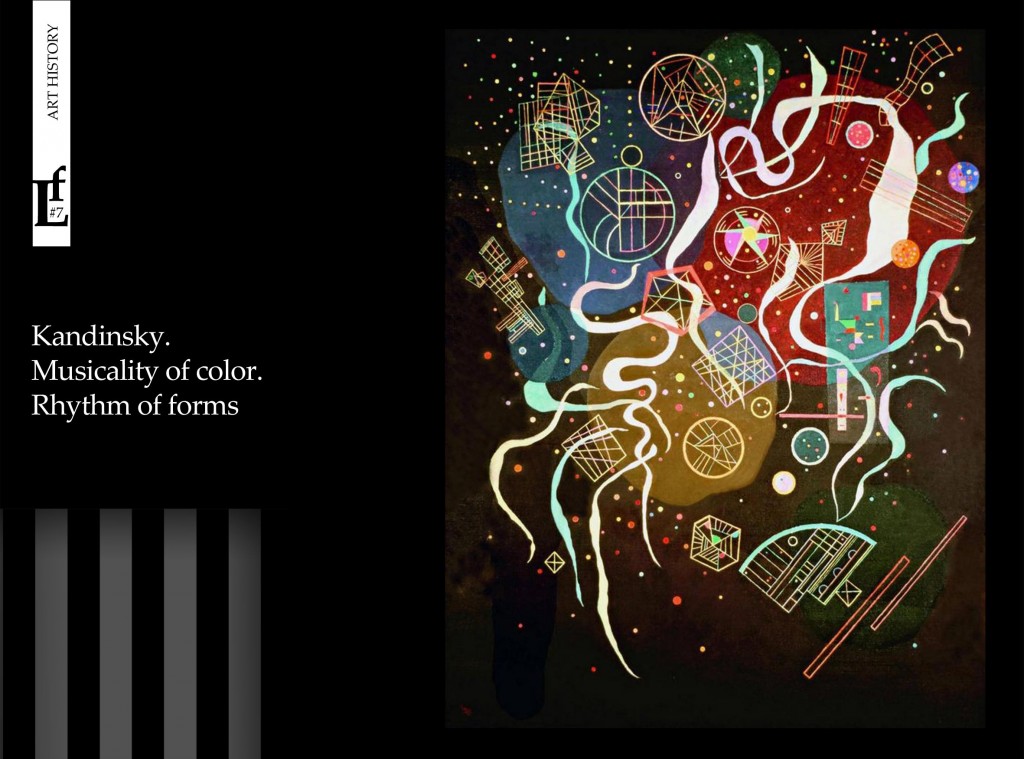 But no, it’s not a stone in the direction of the organizers, they did an excellent exposition, real retrospective. Here are the works of different periods of his life, sources of inspiration, searches, experiments with diverse techniques, porcelain, books, poetry, his quotes on the plastic plate,accompanying the spectator along the entire the exhibition. And as a result is a large audience. 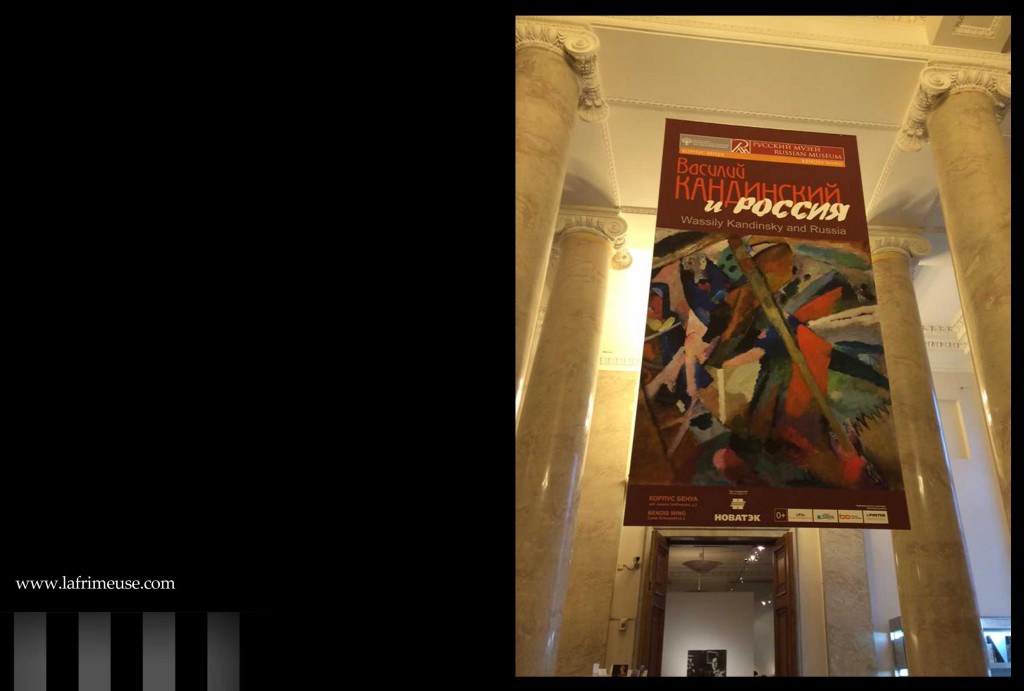 But even to a staunch citizen of the metropolis, which is used to the crowds, it is difficult to perceive such a mass of information.  Much more impressions could obtain when several compositions of Kandinsky were hung separately on the third floor of the State Hermitage. It seems that his artworks need to perceive  little by little, like the music, and namely like chamber music, and it should not rattle from all the walls and corners by absolute cacophony. The energetics of this artist requires more space. 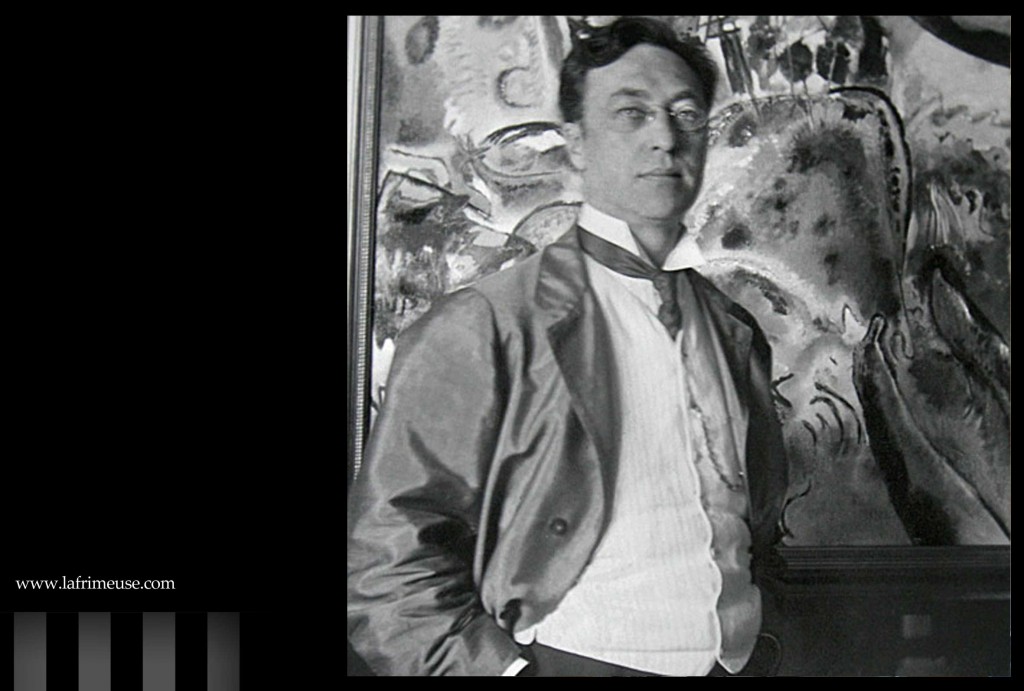 The life of an artist was amazing, full of events and twists of fate, it seems unlikely the story of one man. There were all the disasters of the first half and middle of the twentieth century, the best educational institutions (from the University of Moscow to the Munich Academy of Arts), the constant search for new ways in his creativity, formulating of principles and the manifesto of abstract art and friendship with the most famous representatives of the artistic world, participating in the creation of the most famous school of synthesis of Arts and  design. Yes, and it’s all about Wassily Kandinsky. I will not retell his biography, that’s been made many times  before me, you can read it here for example. 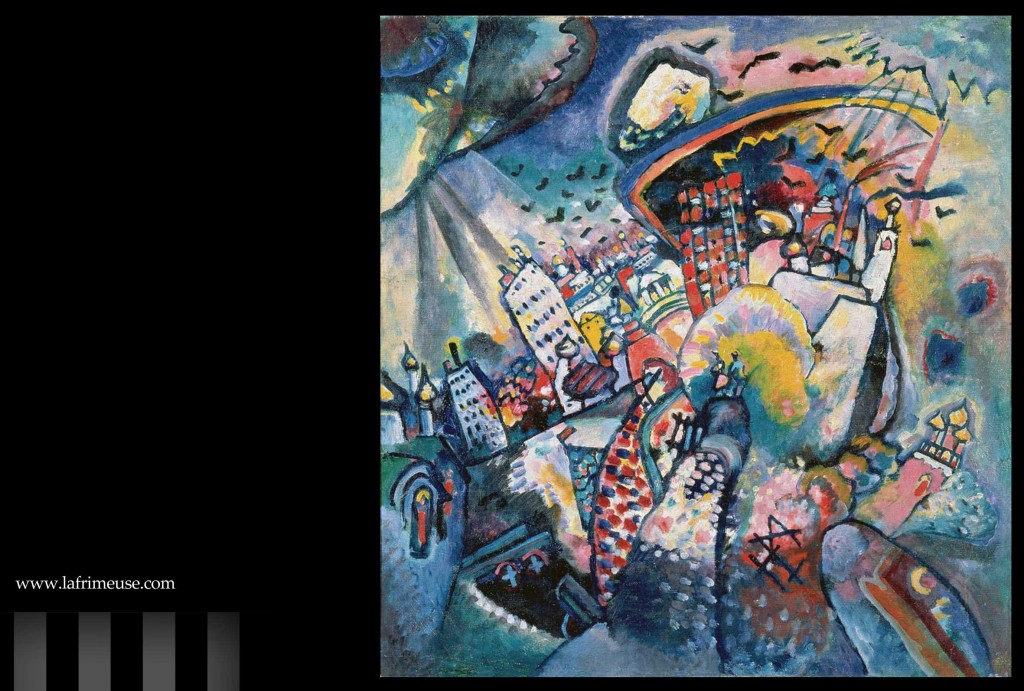 Here, the theme of our publication is  about the aesthetics. It’s about well thought out aesthetics of abstract art and its theory and manifesto which were written, namely, Wassily Kandinsky.  His desire was to affect on a viewer as a musician that sets the mood, impression, gave the course of associations for creating own images, but only by painting or other visual means. This was the idea of ​​his works.

Colours like sounds. Some of them are bright soloists, others serve as a basis, background, that flow slowly and dissolve in space. The rhythm of an artwork is a form, it can be looped into a circle and repeats his own frequency in smaller circles, they are approaching, then again is moving away from us. The work propose to dive and catch the appeal and energetics of the author. 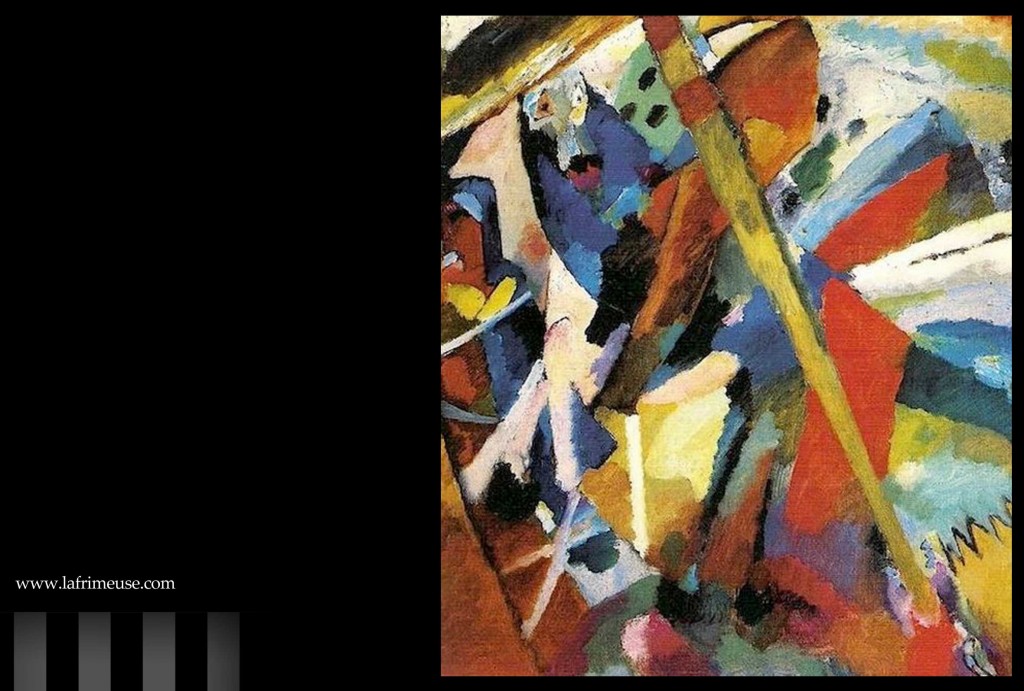 «In manipulation of form music can achieve results which are beyond the reach of painting. On the other hand, painting is ahead of music in several particulars. Music, for example, has at its disposal duration of time; while painting can present to the spectator the whole content of its message at one moment…. These statements of difference are, of course, relative; for music can on occasions dispense with extension of
time, and painting make use of it. Music, which is outwardly unfettered by nature, needs no definite form for its expression». -from the book of Kandinsky «On the Spiritual in Art». 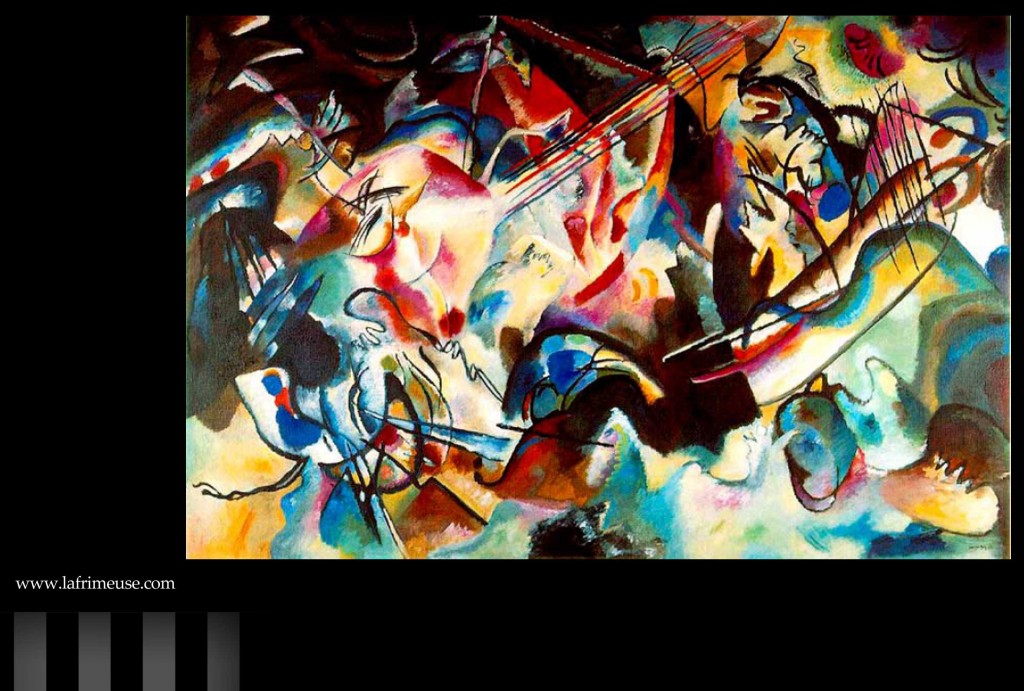 «The grandiose disaster  is commiting and at the same time having an absolute and independent sounding of hot paean, this anthem of the new creation, which follows for a disaster.» – Kandinsky wrote about this work.

The artist had an interesting experience when he was in the ethnographic expedition to Vologda province. Where he went to the farmhouse at some village, It was beautifully painted inside by scenes  from fairy tales and ornaments. At that moment, Kandinsky understood that he would try to immerse the viewer in the his images,  to feel the harmony of colors and shapes, as if there would music all around you. «In these wonderful houses I have experienced something that has never before felt. They taught me to enter into the picture, to live in it. »- he wrote in his diary. 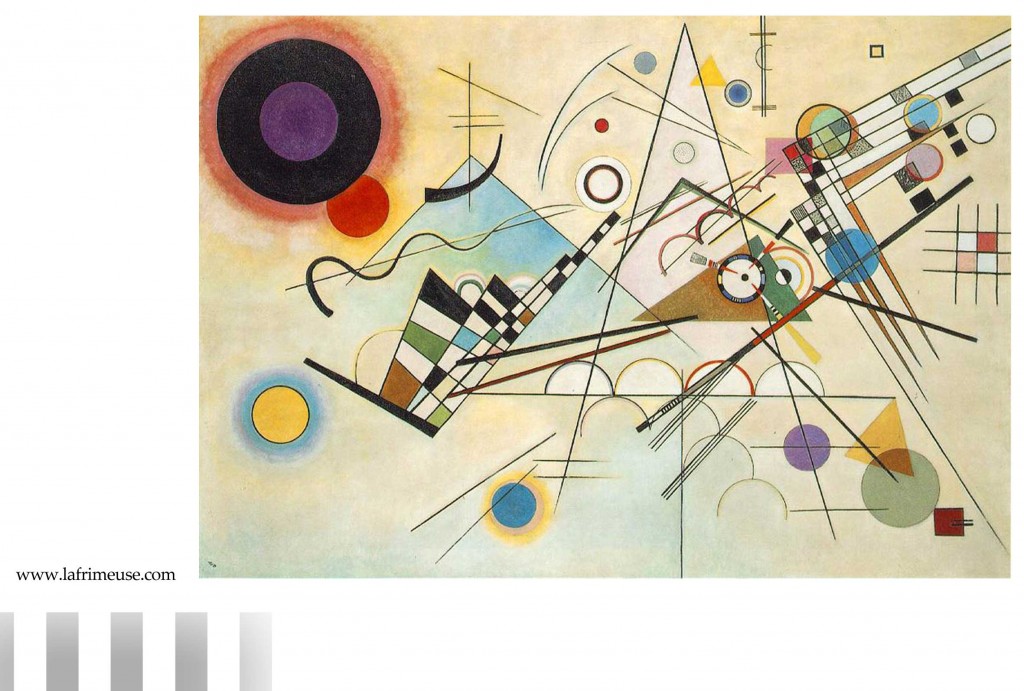 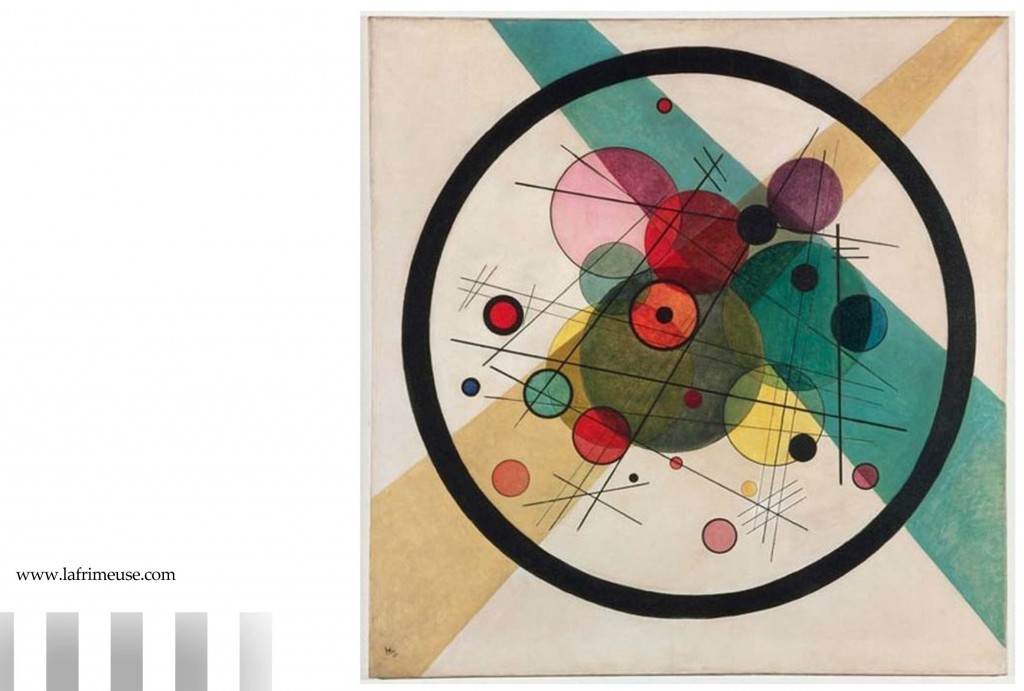 He  called his paintings as improvisation, composition, vibration, as a composer sometimes refers to his creations. So, let’s try to dissolve ourselves in the musicality of his paintings and get along the mood and the emotions that he tried to express. 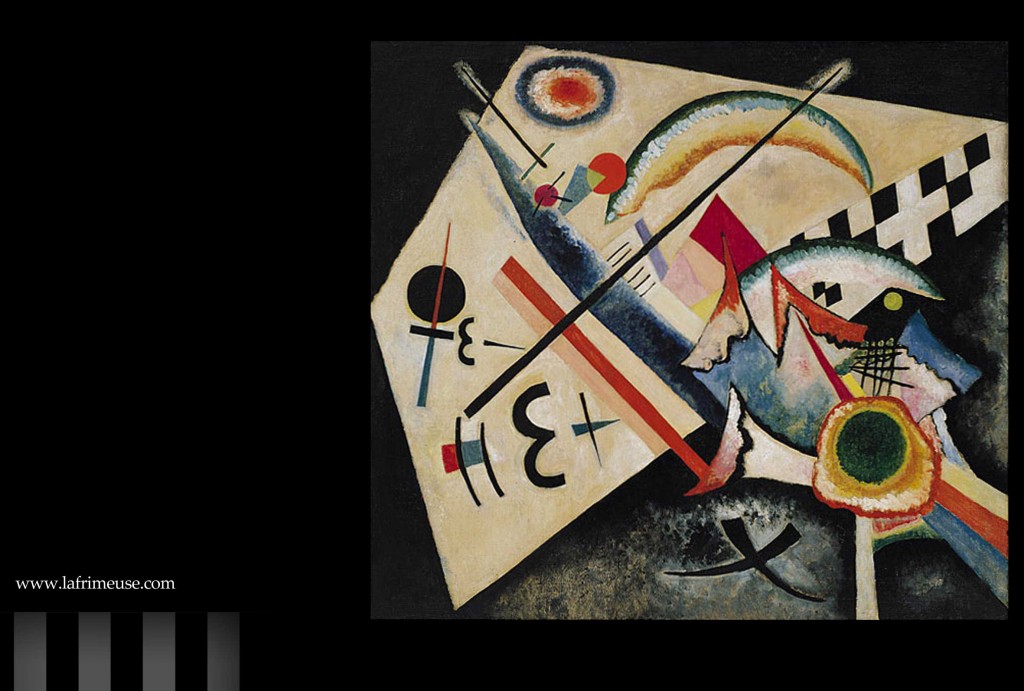 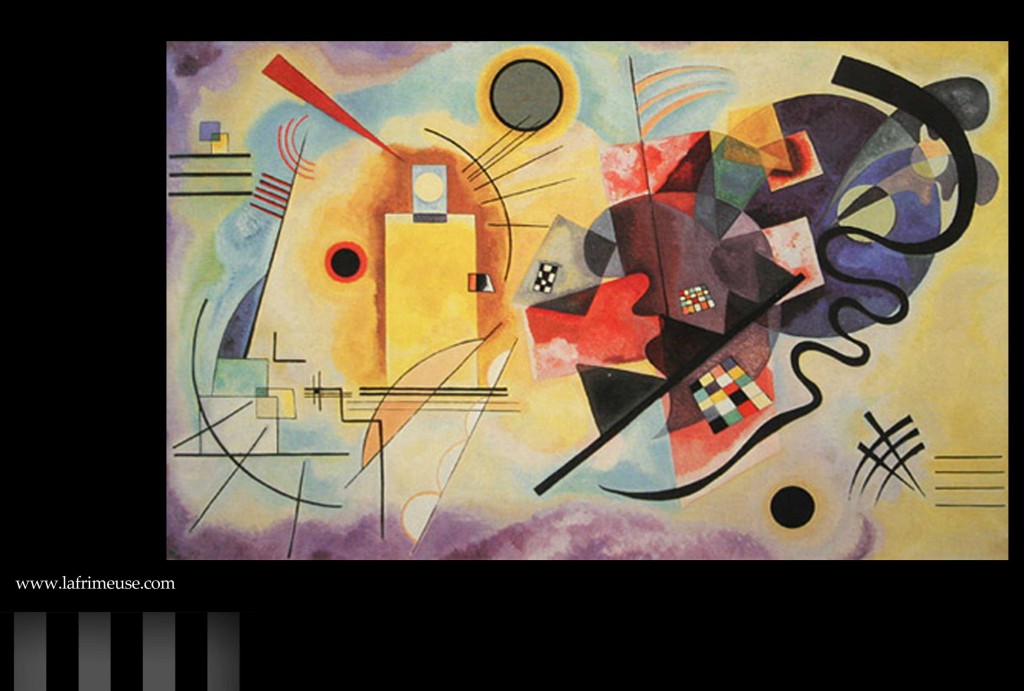 All photos from the site http://www.wassilykandinsky.ru