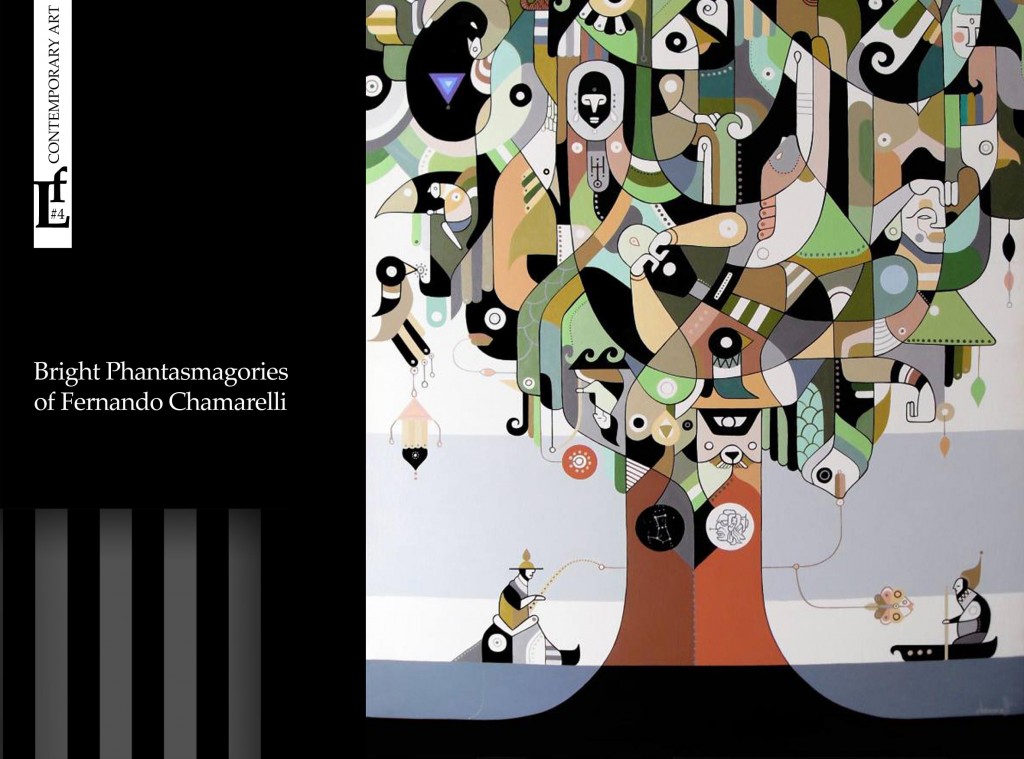 The strange creatures is interflowing one into another, creating mutual images of the different beings and deities of other worlds. We can guess they aren’t dangerous, their bright colors resemble us some amazing visual aura involve into the festive atmosphere inherent in Brazilian art in general.
These personages have come on canvases, murals and they are the fruits of artistic imagination of painter and designer Fernando Chamarelli. 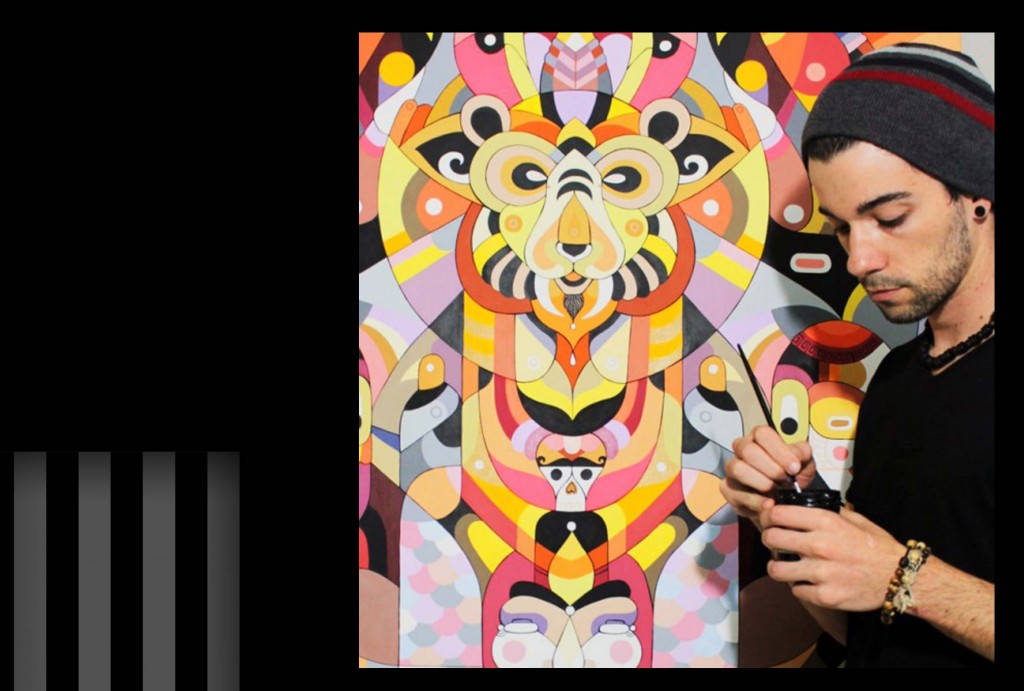 According his own words his creativity based on ten pillars: spirituality, mysticism, history, symbolism, mythology, philosophy, astrology, occultism, anthropology and geometry.
But namely geometry allows to feel the rhythm of lines that run through all work. They connect, split, turn on the opposite sides and again merge, creating integrity of the composition. 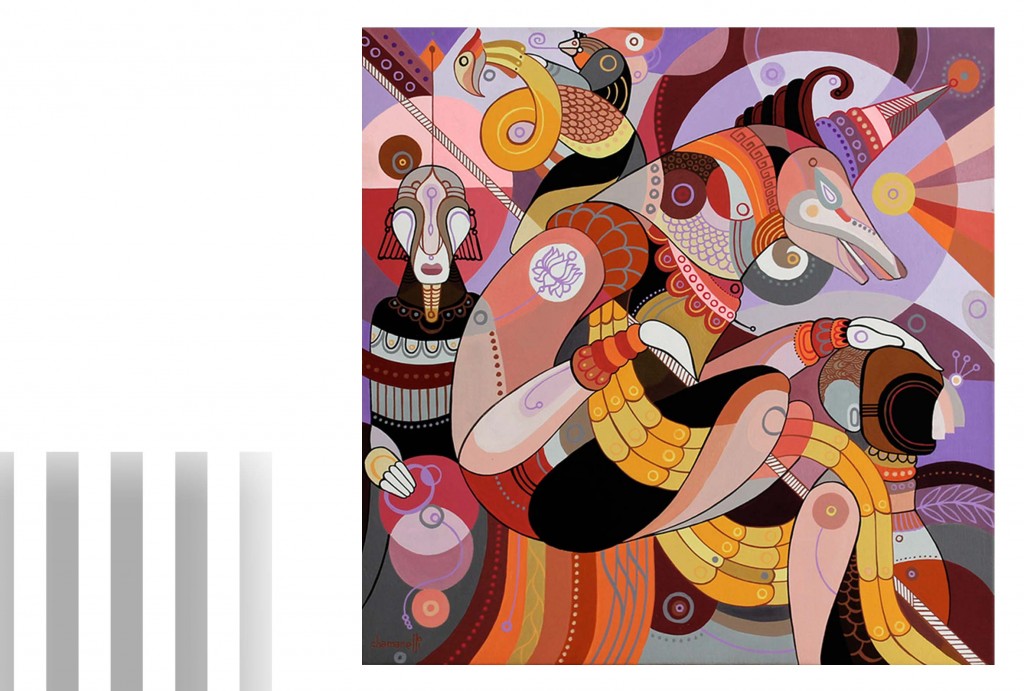 The bright images is the powerful of mixture of graphic design, experiences of tattoo artist and street art.
No recounting of Chamarelli’s creative works would be completed without the mentions of deep roots outgoing in ancient tradition of indians, lived on his earth, without influence portuguese colonizers, own way of developing of the original Brazil contemporary art and the total atmosphere eternal carnival and holiday. 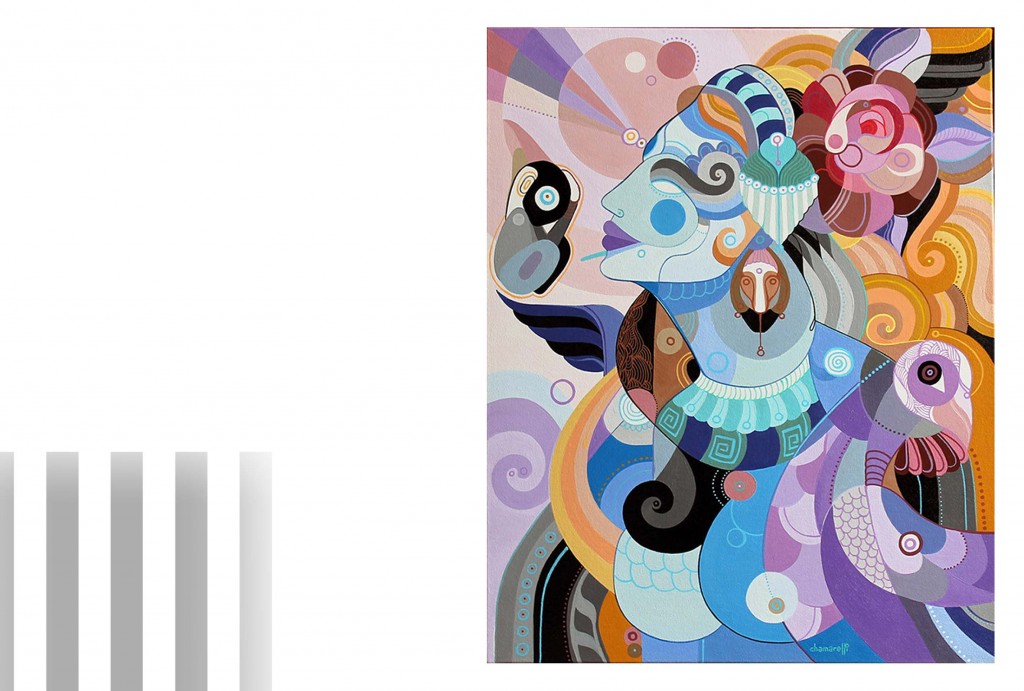 Being an artist and illustrator with a degree in graphic design Chamarelli as Rex Ray has brought special aesthetics in «pure» art. When design and art connect, they enrich each other and result could be impressive. The works have been written by its own language, special symbols and decorative techniques.
The composition is clearly thought out, it is interesting to read, it invites to find key and  decipher some code by which encrypted message to a viewer. 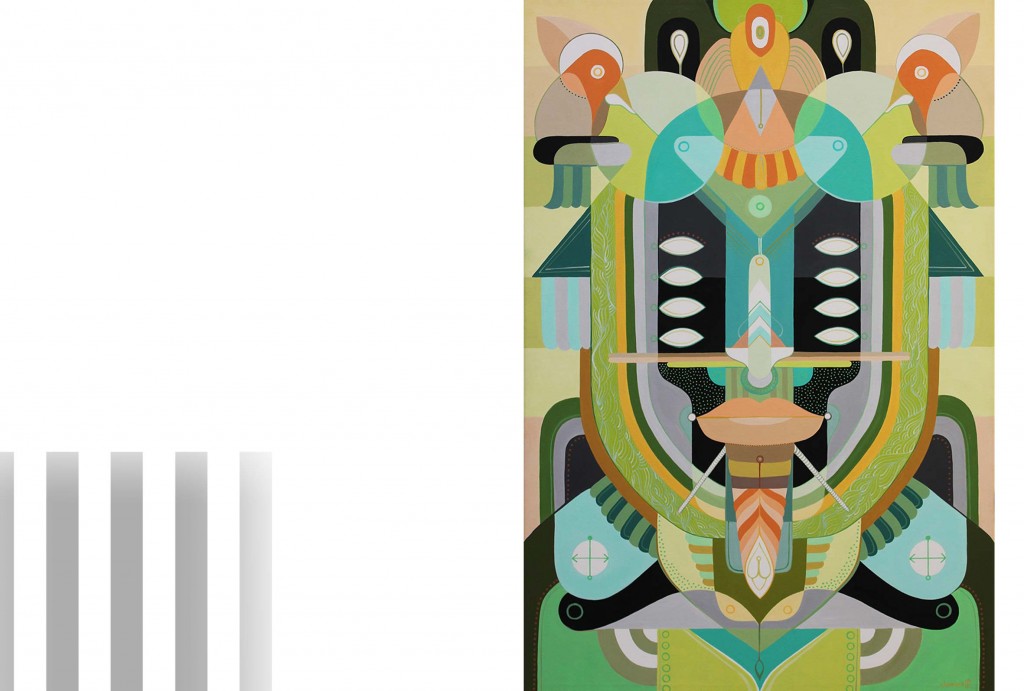 His pictures are multilayer, one can guess that the next mask could be found after the first and then one else and so again and again. Directly engaging a beholder in his art, Chamarelli opens new ways to his own fantastic world. This process is endless and amazing. 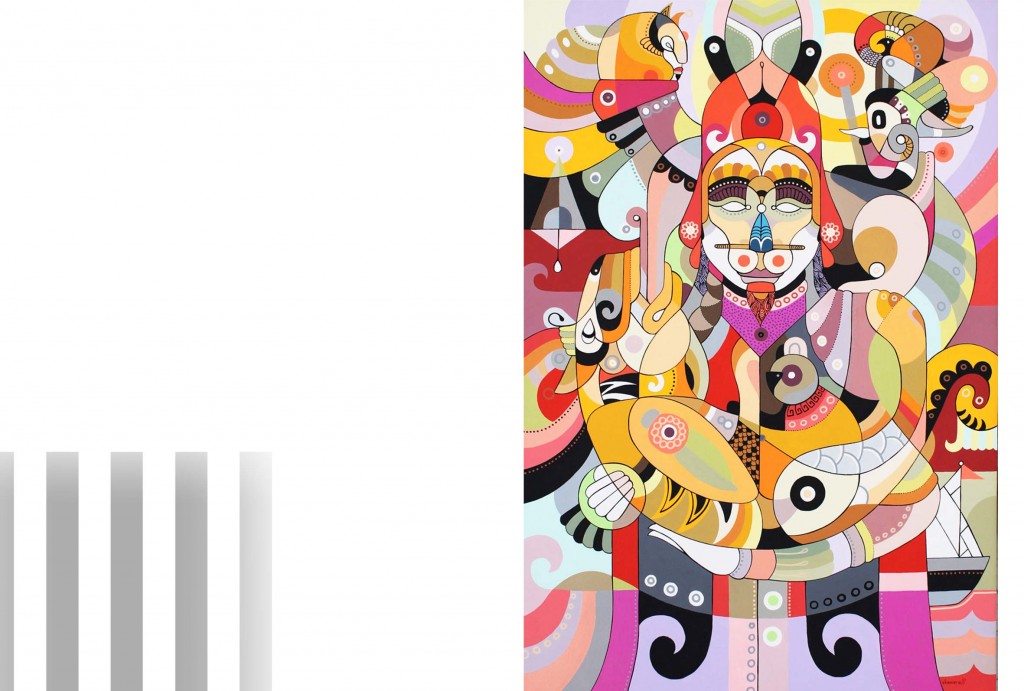 Although Fernando Chamarelli expresses his art temperament and emotional perception of life through the combinations of almost «pure» colors, sharply contrasting with each other, for my opinion his strongest feature is graphics. 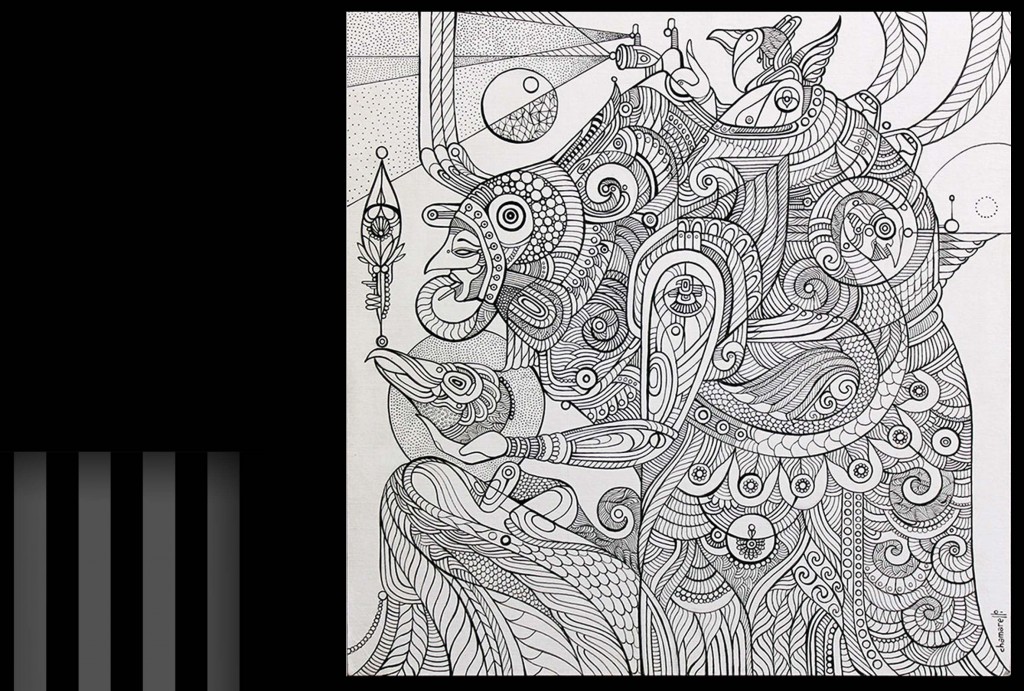 The monochrome works of artist are the real poetry, dedicated the rich heritage of his ancestors, their traditions, mysticism, religion and as well own deep fantasies, which come from subconsciousness and urge to create. 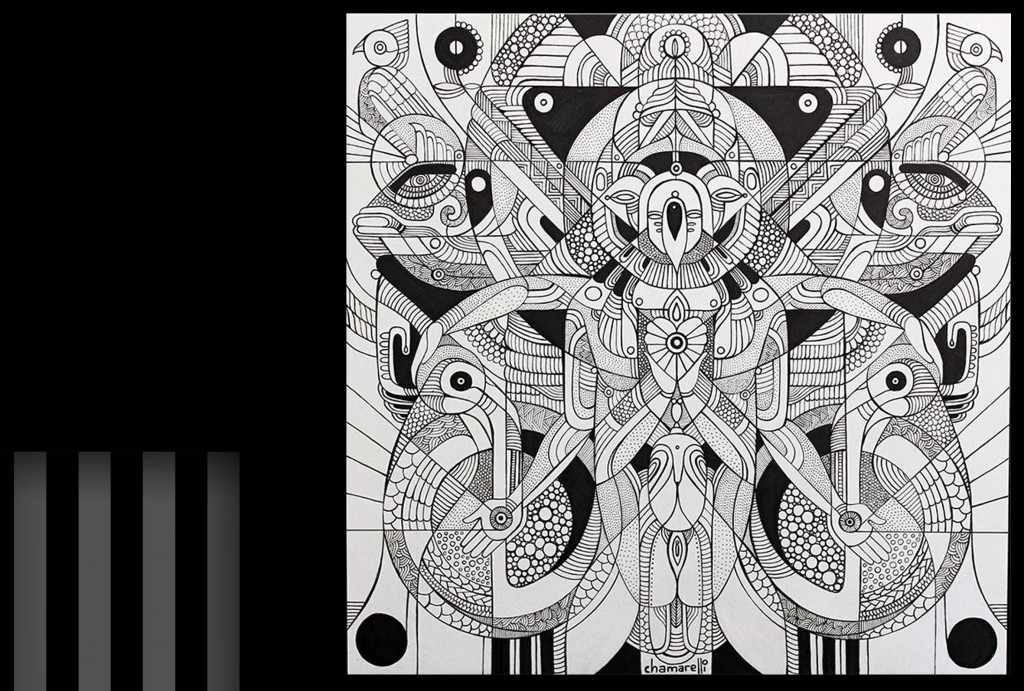 And if I had to organize the space of the exhibition Fernando Chamarelli, the journey into another reality would begin from his graphics, brightly illuminated on the black walls, and then, the viewer would be invited to the bright rooms, where of colored geometric shapes gathered  as the bright  amazing phantasmagoria. 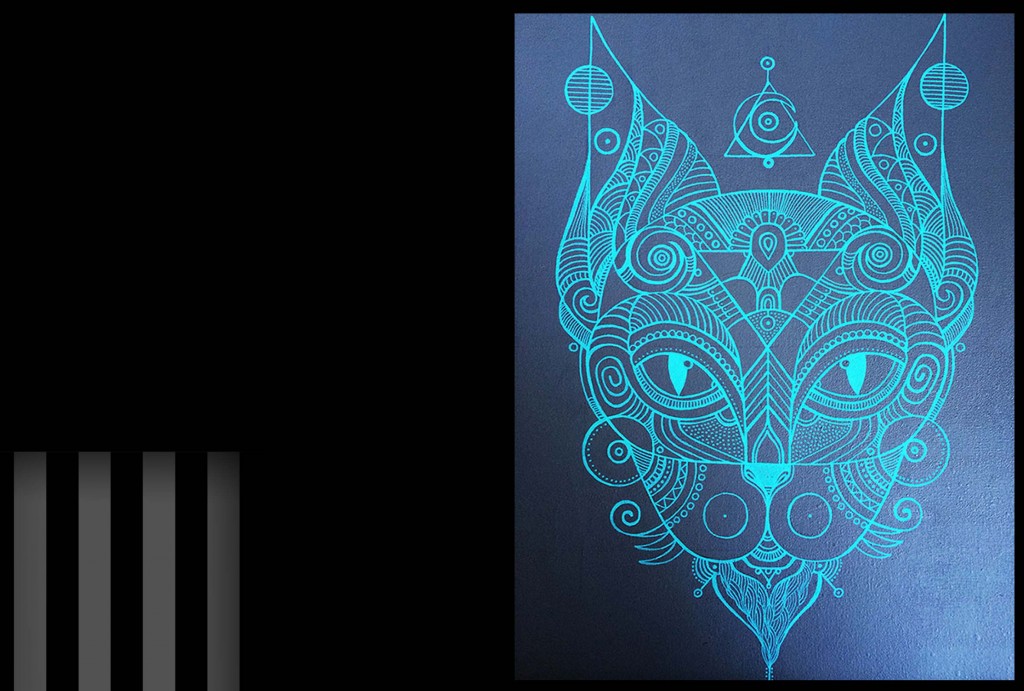