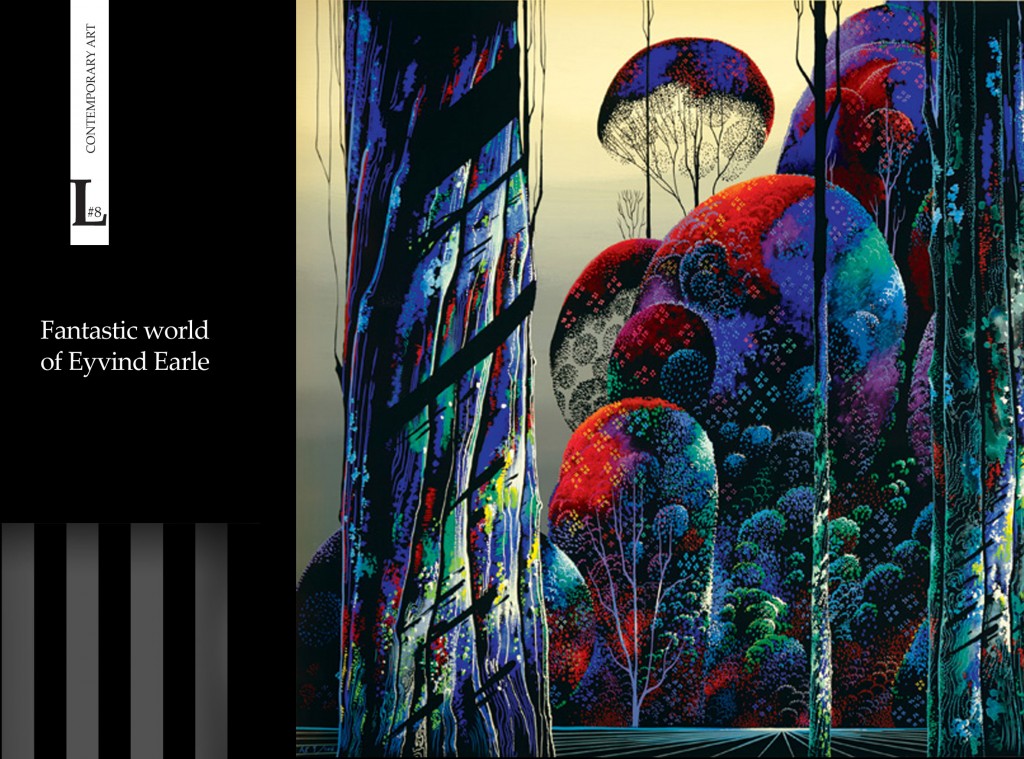 Contemplation, tranquility and full Zen – that’s what  a modern man lacks sometimes. How oftenweI want to say to ourselves or to our relatives: “Let’s slow down the pace, let’s lie on the grass and just look at the floating clouds, at these moments of eternity, so it was without us and so it will be after us, Why all this fuss for? …” 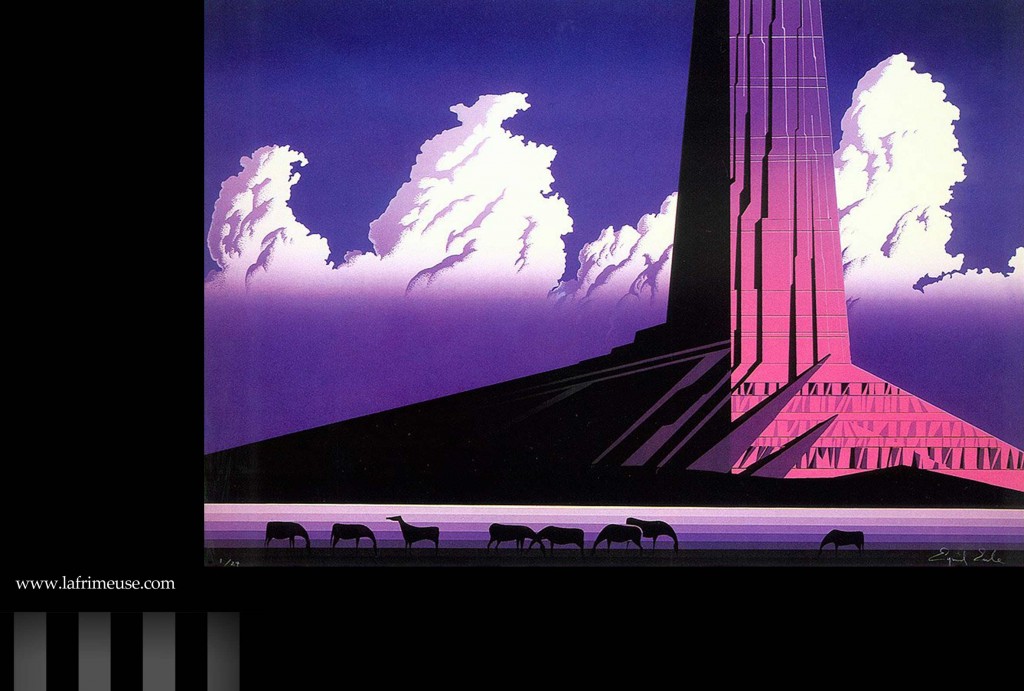 The world in which you can immerse yourself in the works of Eyvind Earle is real and fantastic at the same time. It is mobile and static, here is the sun has put the rays on the big slope  of a meadow, having shined the grazing herds, the nature has stiffened, but animals live the life in this harmony. It seems there is not a breeze, complete tranquility. A bright light gives birth to deaf shadows. But the contrast of the pictures, although it has a somewhat dramatic character, bears pacification and even the spirit of a fairy tale. May be a prince on a white horse could suddenly appear from that tree   … Or the princess would ascend to the hill, walking in a romantic mood. 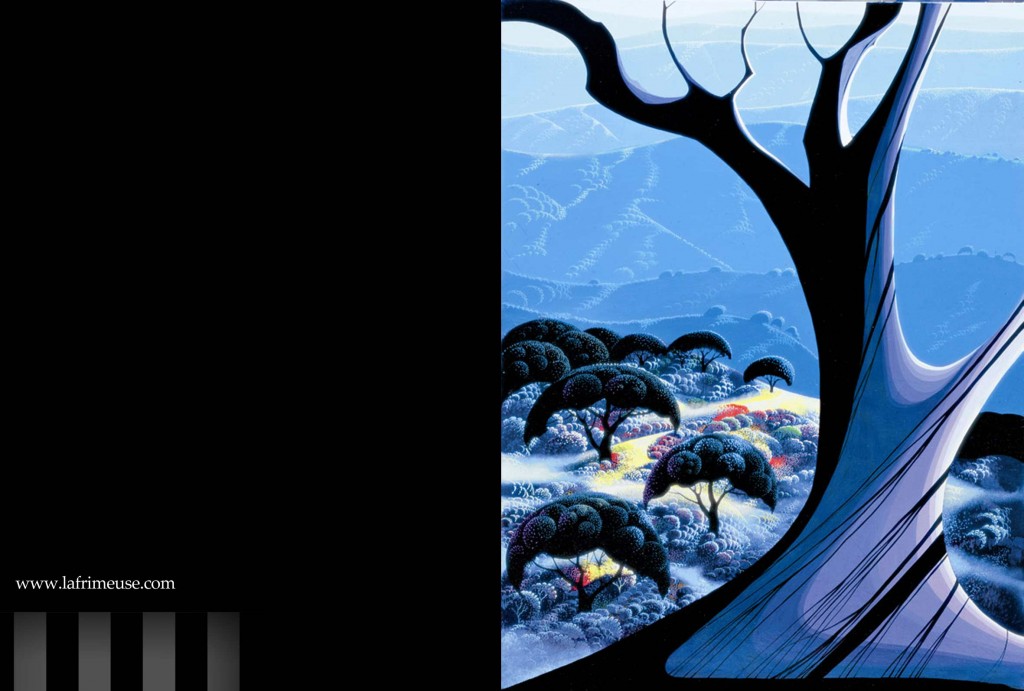 And although he worked a lot on the studio of Disney, we can not find in his paintings there is no cartoonishness, hypertrophy … And there is simply his view of nature around us, its extraordinary beauty, subtle forms, and only one appeal how the miraculous environment is unique and beautiful. 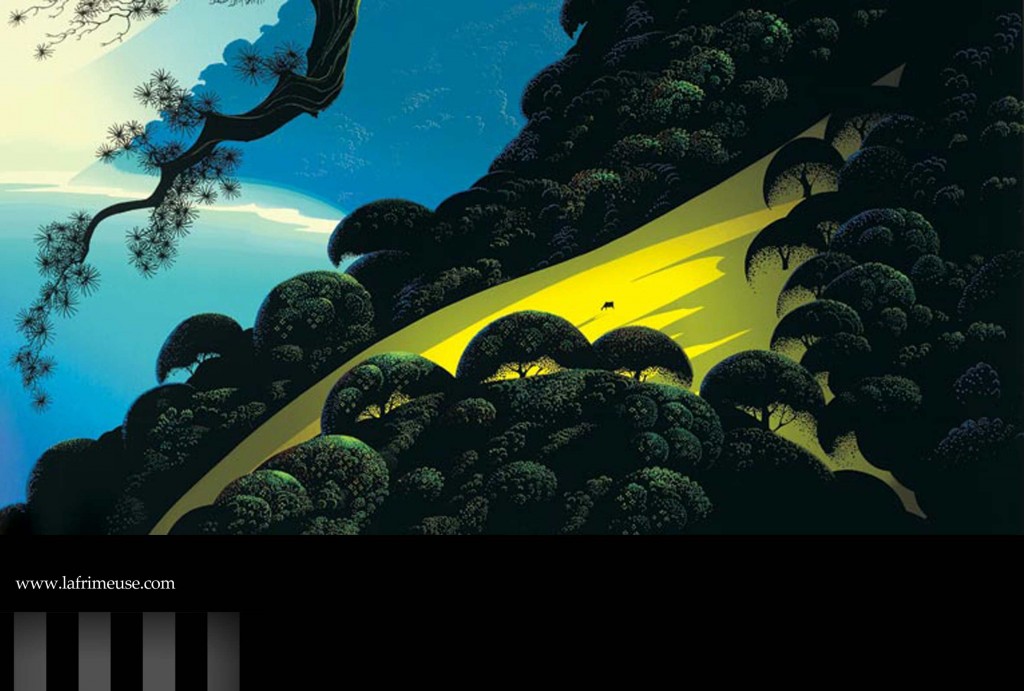 “I’ve painted paintings, and I’m constantly and everlastingly overwhelmed at the stupendous infinity of Nature. Wherever I turn and look, there I see creation. Art is creating…Art is the search for truth.”

Born in New York in 1916, Eyvind Earle (April 26, 1916 – July 20, 2000)  began his prolific career at the age of ten when his father, Ferdinand Earle, gave him a challenging choice: read 50 pages of a book or paint a picture every day. Earle choose both. From the time of his first one-man showing in France when he was 14, Earle’s fame had grown steadily. At the age of 21, Earle bicycled across country from Hollywood to New York, paying his way by painting 42 watercolors. 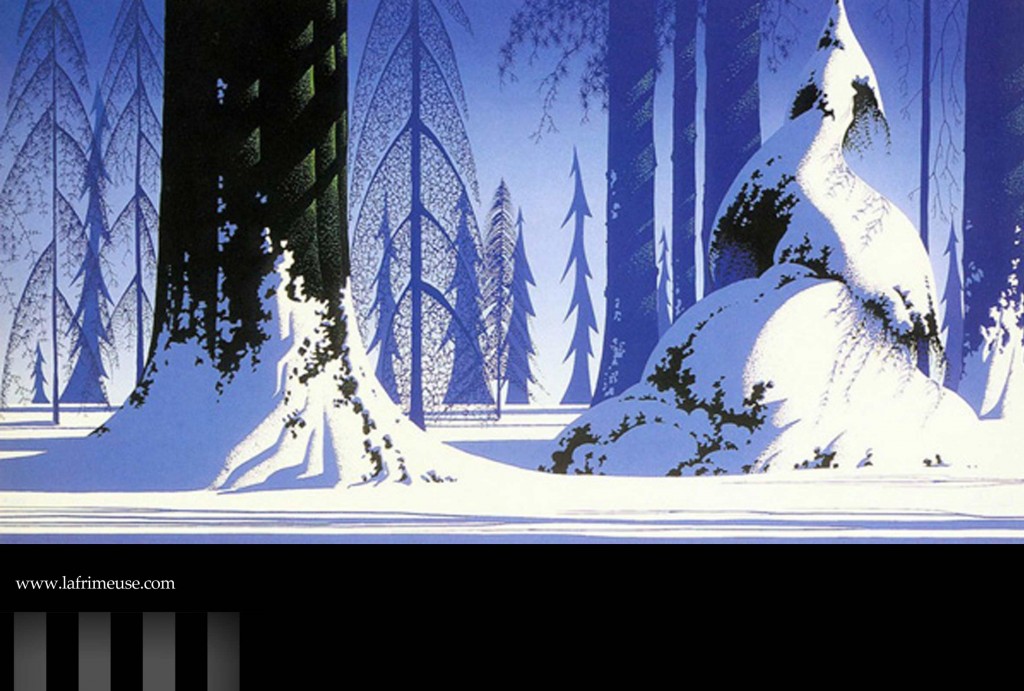 His earliest work was strictly realistic, but after having studied the work of a variety of masters such as Van Gogh, Cézanne, Rockwell, Kent and Georgia O’Keefe, Earle by the age of 21, came into his own unique style. His oeuvre is characterized by a simplicity, directness and confidence. 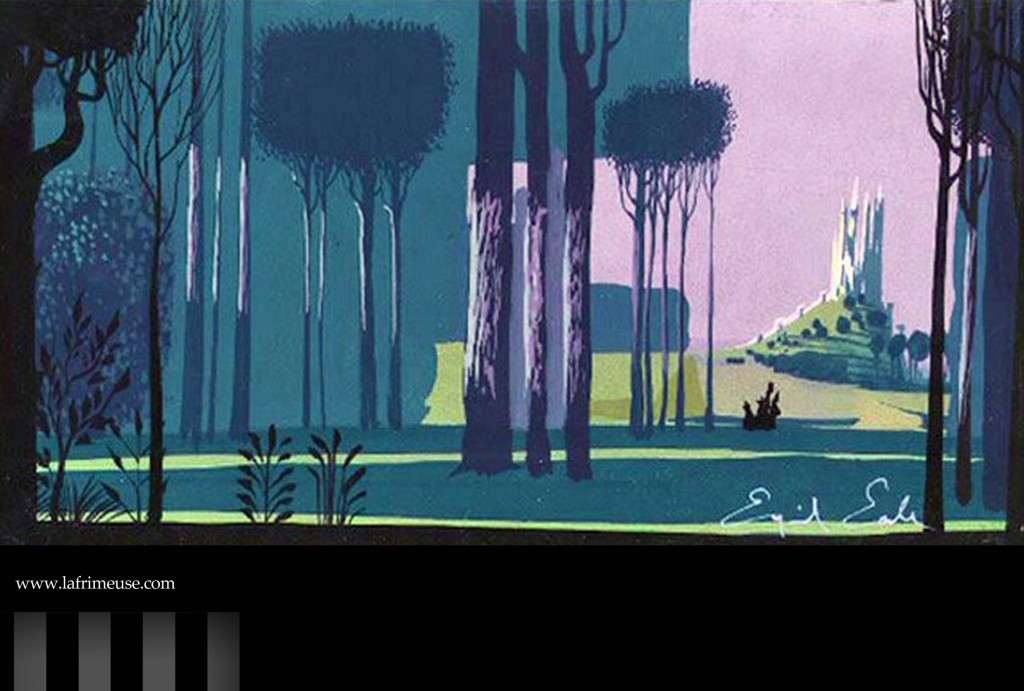 In 1951 Earle joined Walt Disney studios as an assistant background painter. Earle intrigued Disney in 1953 when he created the look of “Toot, Whistle, Plunk and Boom” an animated short that won an Academy Award and a Cannes Film Festival Award. Disney kept the artist busy for the rest of decade, painting the settings for such stories as “Peter Pan”, “For Whom the Bulls Toil”, “Working for Peanuts”, “Pigs is Pigs”, “Paul Bunyan” and “Lady and the Tramp”. Earle was responsible for the styling, background and colors for the highly acclaimed movie “Sleeping Beauty” and gave the movie its magical, medieval look. He also painted the dioramas for Sleeping Beauty’s Castle at Disneyland in Anaheim, California. 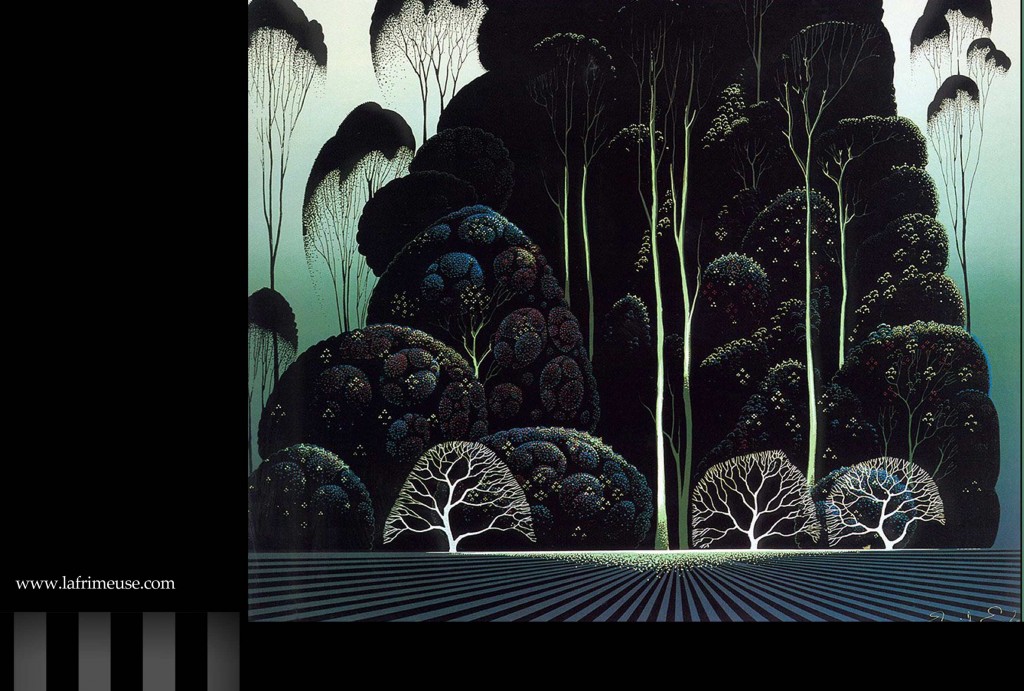 After about 15 years creating animated art, Earle returned to painting full time in 1966 and kept working until the end of his life. In addition to his watercolors, oils, sculptures, drawings and scratchboards, in 1974 he began making limited edition serigraphs. 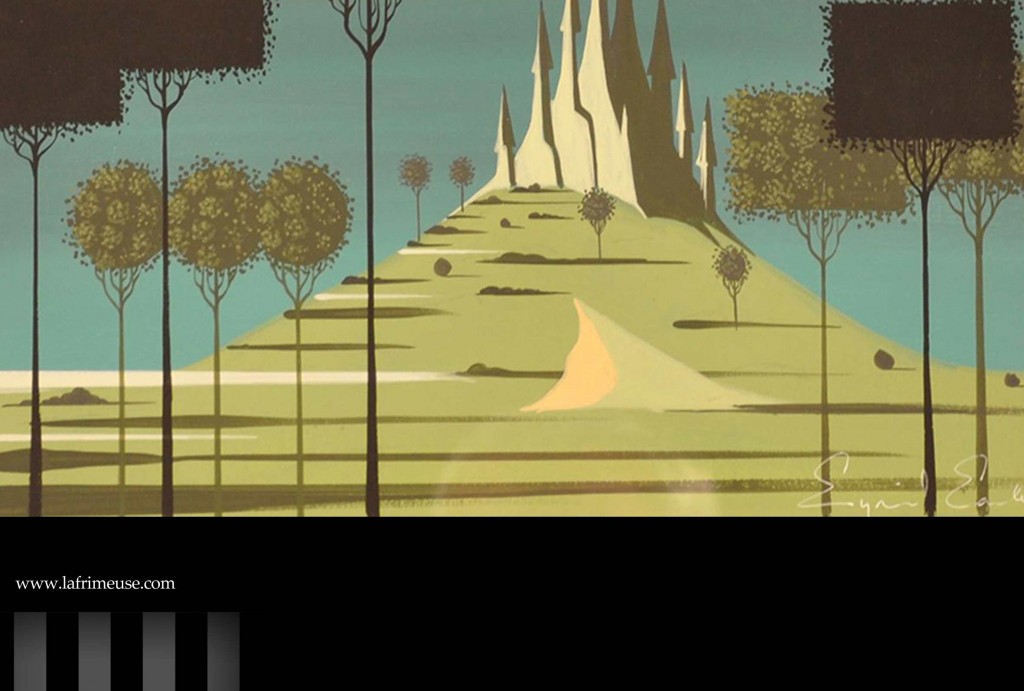 All photos and more information on the artist at www.eyvindearle.com

Michele D’Avenia. Sensuality of subjects  and the movements of femininity
Five things of the week #1