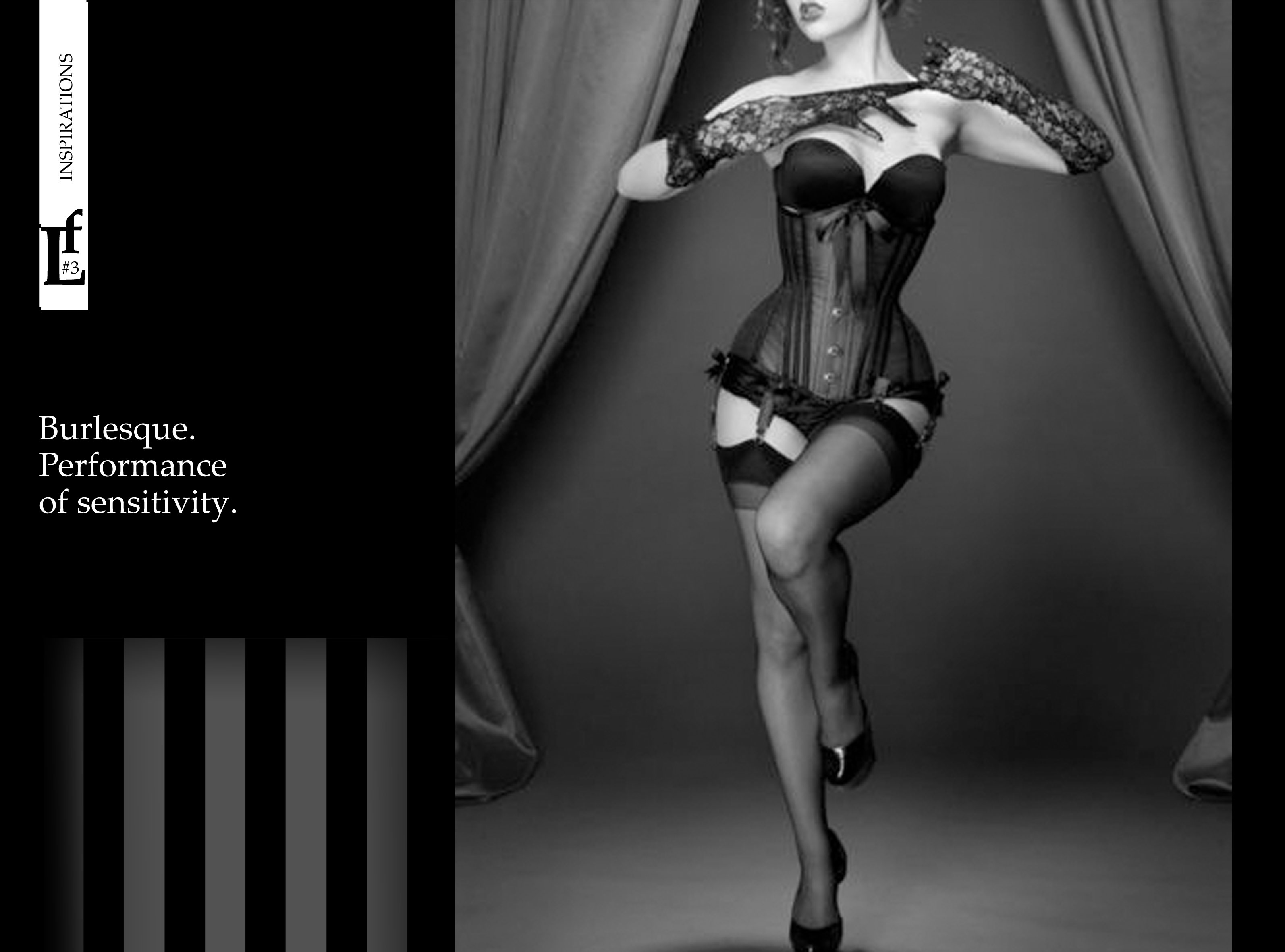 Burlesque. And at once on can imagine something of the seething or turbulent, something that has emotional impact. And indeed, a lot of emotions are not only when we are watching this show, but even when we are talking about it.

Opinions about the burlesque are over than polar, from a vulgar striptease  to the fine and sensual performance of art. But in any case, even highly moral action can debase and basest representation rose to a height of pure art. It depends on the aesthetic position of the performer.

It isn’t easy to trace the origins of burlesque.

It is believed that the prototype of burlesque can be found among the ancient Greeks. When sexual desire, teasing and even blackmail of complete failure perform marital duties had led to a halt of the war. Aristophanes described it in his comedy about Lysistrata, where the Athenian wifes closed themselves the Acropolis and were not allowed to their husbands until they finished the protracted war with Sparta. And it worked. 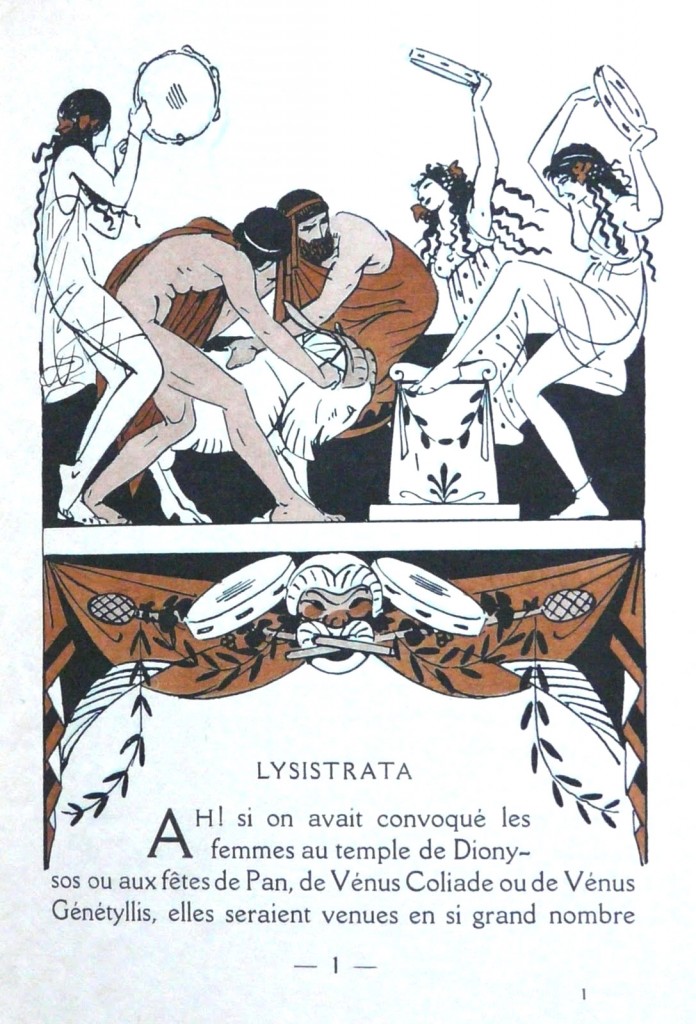 There is an interesting suggestion that the biblical Salome was the first burlesque dancer, and the king was ready to fulfill her every wish. We all know what she had wanted then. 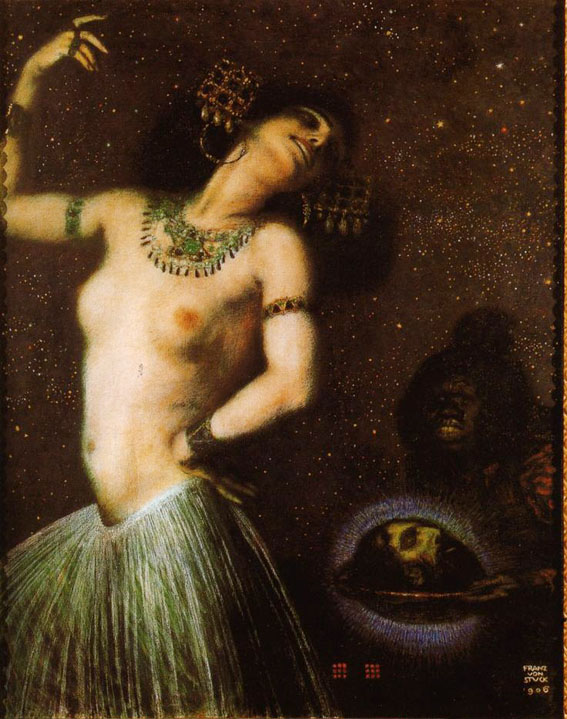 But the basic version of the appearance of burlesque leads us to the middle of the nineteenth century. When the burlesque had some of vaudeville, sometimes with obscene humor.
These shows opened for working and middle class in 1840 in England , kind of entertainment shows with elements of parody and bawdy jokes. But later in 1860’s the emphasis had shifted on the nude female forms , on the showing of underwear in the burlesque. Everything to maintain spectator interest.

The troupe Linda Thompson created in those years was gaining notoriety. Their first show was a parody of the myth of Iksone where women played male roles put on tights and lace trousers . The performance of dancing girls on stage in tights was the insolent challenge in the Victorian era, when women had to hide their shape.
The show toured in America and had unprecedented success. 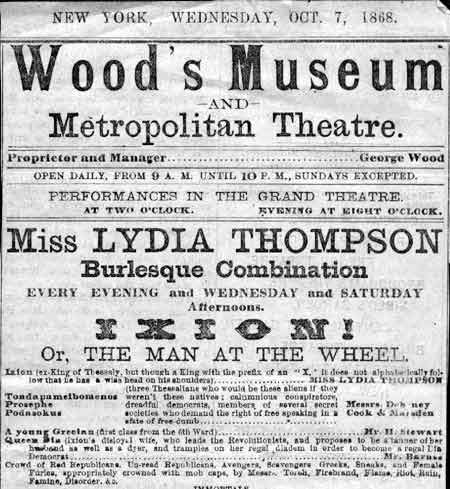 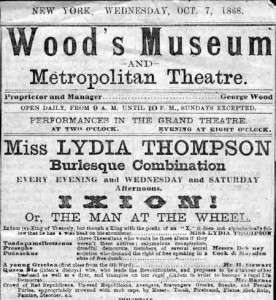 The advetising of the show of Linda Thomson

By the mid-1930s in the United States the real boom started, there were already more than 150 leading artists of burlesque. The brilliant stars suсh as Sally Rand (first performer of the dance with huge feather fans, which became an integral part of burlesque) shined on stage. The most popular composers and jazz performers that time cooperated with these troupes. 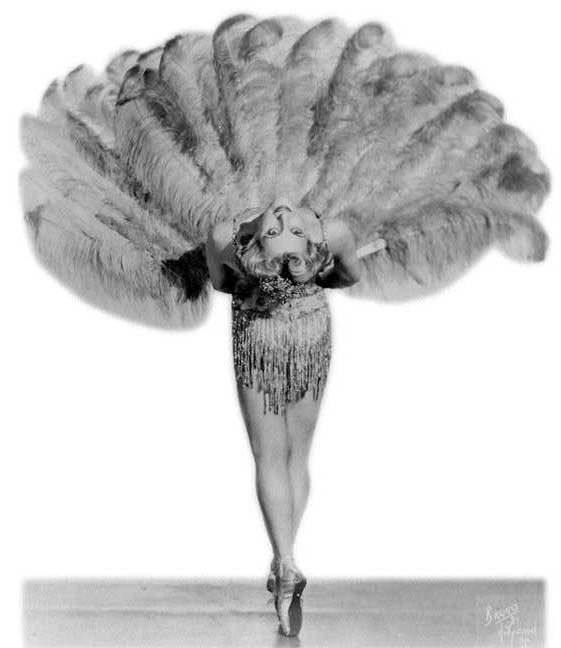 Europe of that time also circled in rhythm of endless carnaval. Cabarets prospered with burlesque shows in their programs .  The brightest star shone in Paris,   It was Mistinguett, the singer and actress.  Although one can’t  be  attributed entirely her performance as  burlesque, she had the greater impact on the genre. Her shows had a pretty frivolous character and were  on the verge of decency.   It is no secret that she was not an outstanding singer or dancer. But these facts didn’t prevent her to be the highest paid actress in the world. She had performed in the most famous cabaret Folies Bergère, Moulin Rouge and Eldorado.

She liked to say: “I had to invent something…. my legs, ‘the loveliest legs in the world.”

By the time 20s burlesque came around her career was in full swing,  and her influence was most certainly felt, still lasting to today. 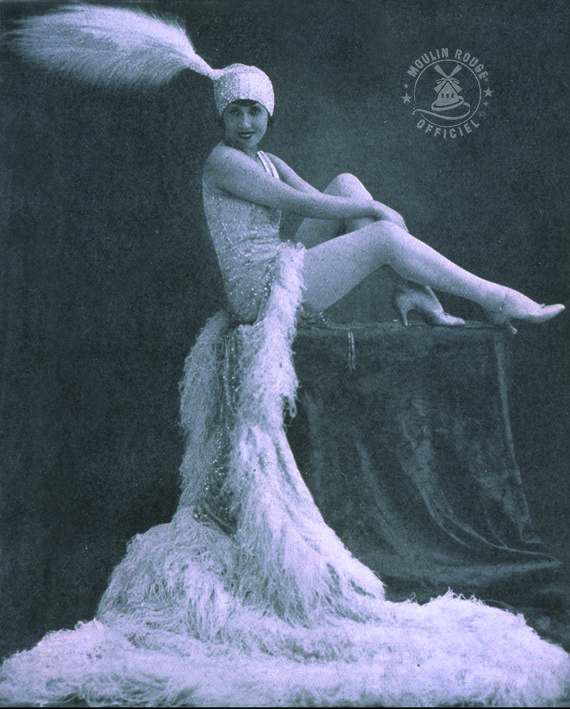 The endless gaiety filled Berlin, intoxicating atmosphere reigned everywhere despite  desperate postwar situation. The terrifying inflation, unemployment, depression forced many of hopeless people to go to the streets and places of entertainment, some to seek adventure and forget the hardships of life, the other to earn on it. There was no shortage of drink, drugs, or beautiful women. Cabaret, dancers, burlesque and other entertainments were almost every corner of streets. 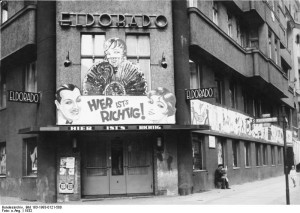 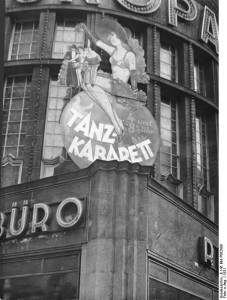 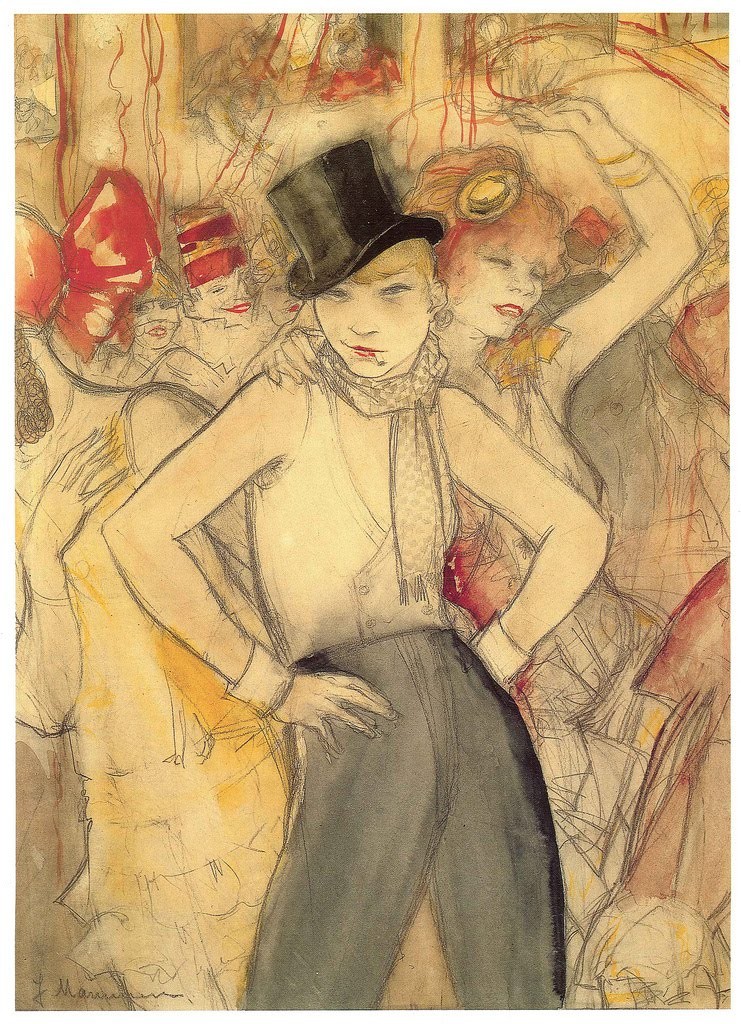 Gradually the shows were becoming more straightforward. There  was more and more frantic and uncontrolled consumption of alcohol in burlesque theaters. The audience made them more dangerous. Despite the enormous popularity prestigious and expensive Broadway shows, burlesque was banned in the state of New York  by order of the mayor of New York, Fiorello LaGuardia  in 1935.

The other states also imposed restrictions in the burlesque shows. there were prohibited    performances where artists  could appear on stage without the thin bra or “pasties” (decorative covering for the nipple), and lingerie. it led to the fact that the actress had to give a higher level of the show and create outstanding costumes, without forgetting to undress under the rules. At various times  performers appeared with trained birds, the scenery were stylized as boudoir or luxury bathroom  on the stage.

Subsequently, burlesque shows became increasingly closer to striptease.  So, burlesque has become a form of striptease, but more flirty, sophisticated and cunning. The real stars of the burlesque of that time were Tempest Storm , Bettie Page, Lily St Cyrus, Gypsy Rose Lee  and others. 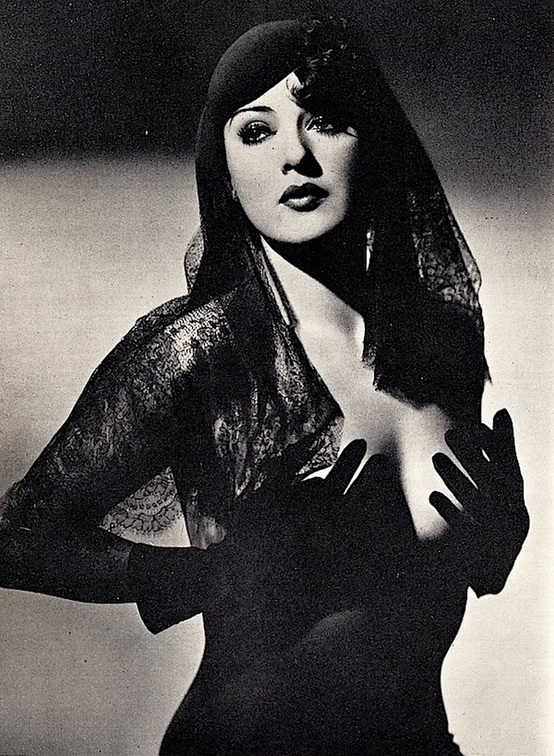 They considered  the burlesque as the form art and made it so.

Gypsy Rose Lee remembered well her first appearance and wtote in her memoirs: «Appearing before a crowd of men, I coyly glanced at them. I performed a few dance steps, I dropped the shoulder strap of the bra by  decisive movement , exposing one shoulder and froze, as if undecided. It was something new: other burlesque performers undressed quickly, almost, mechanically, and here was a game, a surprise. The audience burst into applause … ».

But  the 90s opened the era of Neo burlesque. And burlesque as the vanishing form of the art  has once again started to gain popularity. Much of the merit for the revival of the genre belongs to the American dancer and model  Dita Von Teese. It was she who brought in her statement the charm, grace, and those attributes which were peculiar burlesque the end of XIX century.  Dita built her show on a huge amount of details, the number of which  include corsets, huge feather fans, seductive lace underwear and so on. 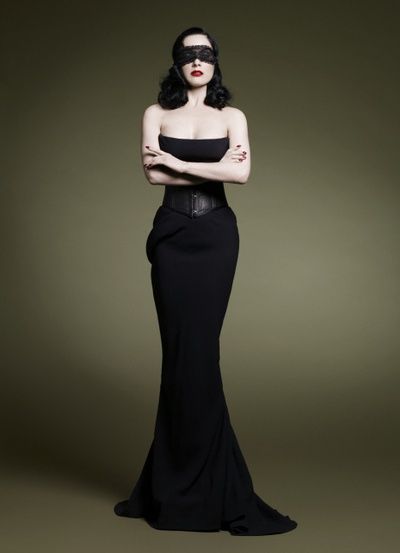 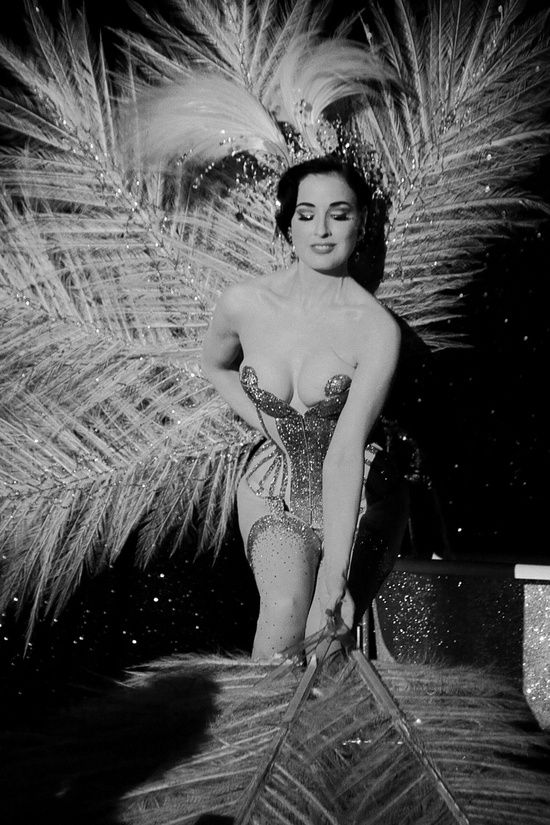 If you have ever read interviews or memoirs performers of this genre, almost all of them say in unison that burlesque is not a striptease. Not a lap dance. This is a real mini-spectacle, where the main character is a body. There are irony, self-irony and, of course, sensuality prevails over all. For the authors of these shows is primarily self-expression. Some of them were closed, even diffident people in life and only on stage they could open their real nature , first of all for themselves. 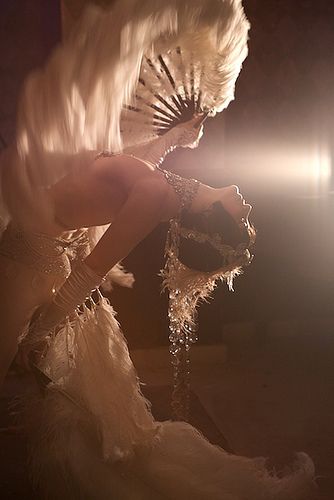 One of these performers, Lady K. agreed to answer our questions.

La Frimeuse -What do you think about burlesque, is it bawdy show playing with lowest instincts or real art of the sensitive tease and theatrical performance, where a body is main instrument?

Lady K.-Burlesque can be either or both. There are many different types of burlesque – Comedic, Sassy, Nerdy, Classic, Broadway-dance routine and Neo Burlesque just to name a few. Some types may appealing to an individual more than others.

For us, Burlesque is more about the tease and the appearance of potential nudity than in-your-face sex. It’s all about suggestion. What it is that you’re not seeing.

A good burlesque performance does not have to go down to pasties. In fact, some of the classic acts would leave an audience enthralled as they tease the audience with a ten minute glove removal routine. Another classic act is Sally Rand’s Bubble routine. It’s a graceful routine that keeps the audience wanting more. Many other acts provide social commentary on current situations, or they have technical broadway-style dance routines.

A burlesque performance should leave audiences and performers feeling empowered and uplifted, not ashamed.

La Frimeuse – You have said to me that there are many different types of burlesque. What type you choose for your shows? Or what kind of them are closer your style?

Lady K. – I think I bring elements of different styles in our show, but more attractive period in the history of burlesque is 1940-50s when there were  the real stars who shone on stage and made high-level performances.

La Frimeuse – Everybody has own way to burlesque. What is the main or common reason for you, when you decided to begin your career as burlesque-performer?

Lady K. – You’re right, everyone has the own way. I was an economist in a glass office building, went to work every day, sometimes needed to stay at workplace for papers until late evening. I was almost faceless worker among the same. While at one moment I had felt that life passed and passed not so great as I would want. I worked in the school years, dancing, choreography. This is when the passion turned into a profession. The thirst for inner freedom pushes sometimes unexpected but important actions. I am grateful to myself that listened to my intuition and stepped out of the measured life.

La Frimeuse – What burlesque performers of the past are the most important and interesting for you? Maybe, anyone of them remains in minds as the unmatched icon of style burlesque till now?

Lady K. -Yes, many of them were real talented artists. The burlesque performers of 1940-50s made unique shows. But if you would know my opinion, my idols are Hollywood divas Greta Garbo, Marlene Dietrich. Their unique style, mystery and inaccessibility created an aura around them and the status of demi goddesses. Their subtle femininity makes us tremble in nowadays as well.

La Frimeuse –What do you think do age and appearance are more important than inner energy? What are priorities for you when you recruit a new performer in your show?

Lady K. – I would be a hypocrite if I said that age and appearance are not important, but I assure you, this is not the main factor. You should have seen how sometimes an unremarkable woman in her common life turn into the gorgeous girl on stage and simply mesmerize audience. And on contrary  the more attractive girl, coming  under the spotlights suddenly has lost her charm and become constrained, almost wooden. So definitely the beauty is inside us.

La Frimeuse -Who is usually the author of performances and who gives ideas for the costumes and scenography?

Lady K.– We have professional choreographer. The costumes are collaborations of the performers and designers. As you could see we create our show with entire energy, we try to give more entertainment ,a lot of courage. At first we create mood of gaiety and playfulness.

La Frimeuse -Is the audience of your show is mostly male? Do you consider could it be amusing for female audience. Could women open their own femininity, sexuality and inner energy by watching this show?

Lady K.-Recently we have had more spectators-men than women, but now the picture changes. The sphere of women’ s interests shifted to side of femininity, charm , temptation and tease. After every show many ladies thank us for open their inner energy, feeling of something new, the endeavor to be more desirable . They have wishes to be more attractive, more elegant. They start to understand that they need to love themselves and simply enjoy their life.

La Frimeuse -LadyK., Thank you. We appreciate that you found time and  answered our question, your opinion is interestng and important for us. We wish you bright, successful shows and thankful audience.

The origins of design. The story of applied art. by R. Rosental, H. Ratzka.The review.
Open. Just open. Review of the autobiography by Andre Agassi