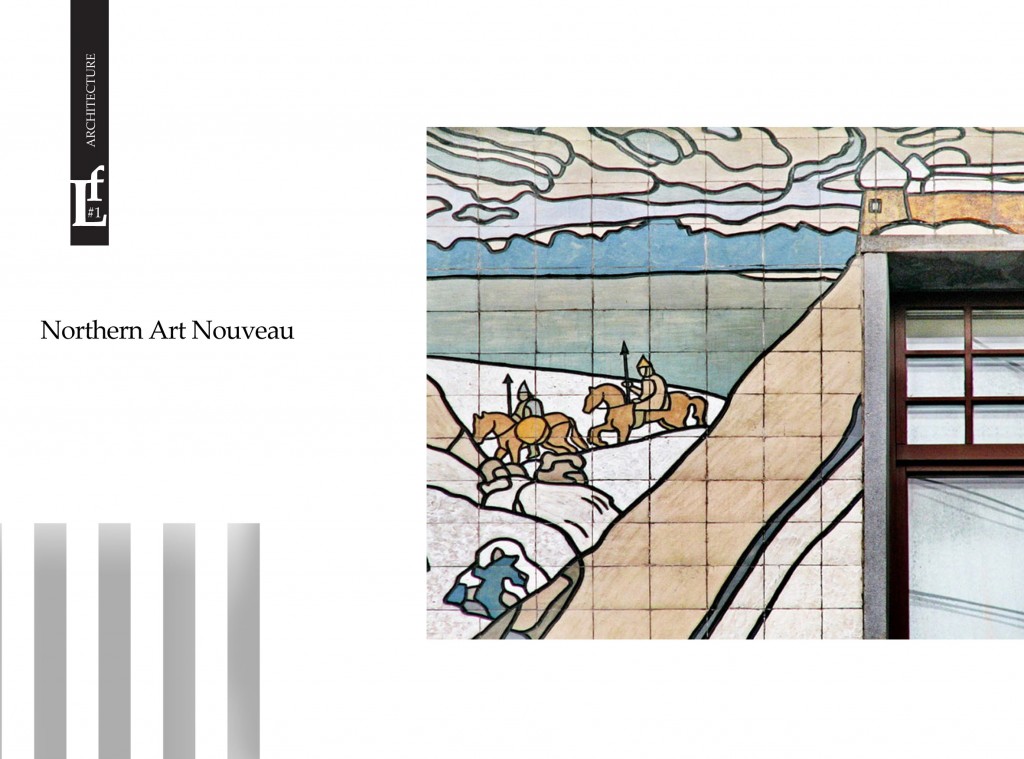 There is nothing new, except only that we aren’t tired to repeat for the hundred and fifty-first time :

“St. Petersburg is an amazing city!”

Sometimes we walk along the same streets in the center, seemingly, for an eternity and stop noticing much, getting deeper into your thoughts and worries. But it is worth at some point cross a road to the other side, just raise your head and “wow!” – all problems for a moment evaporate, because an absolutely marvelous view in front of us. 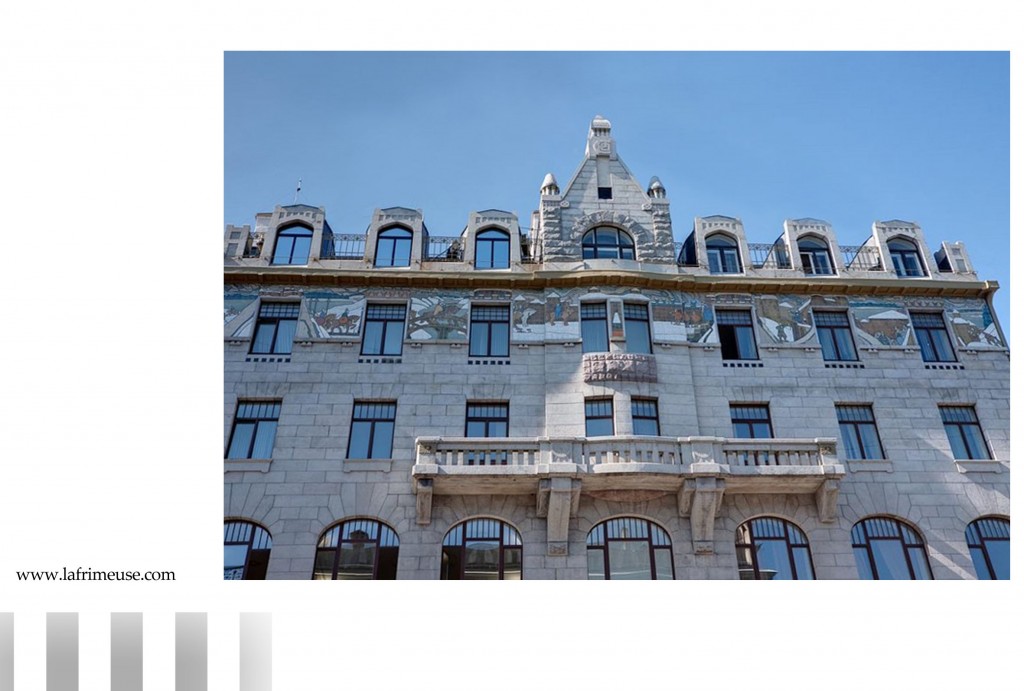 There is a feeling that the facades of houses hide their true beauty, saving it for a special occasion. And at some moment when the light falls at a certain angle, or the sky ceases to be gray and will be reflected in the dark windows with a deep blue color, or simply a state of mind that is ready to perceive only the beautiful, but then the buildings are transformed in a completely fantastic way. The city suddenly changes, the rapture overflows, and we begin to understand, Saint Petersburg is strange, mystical, magnificent, and it is the best. 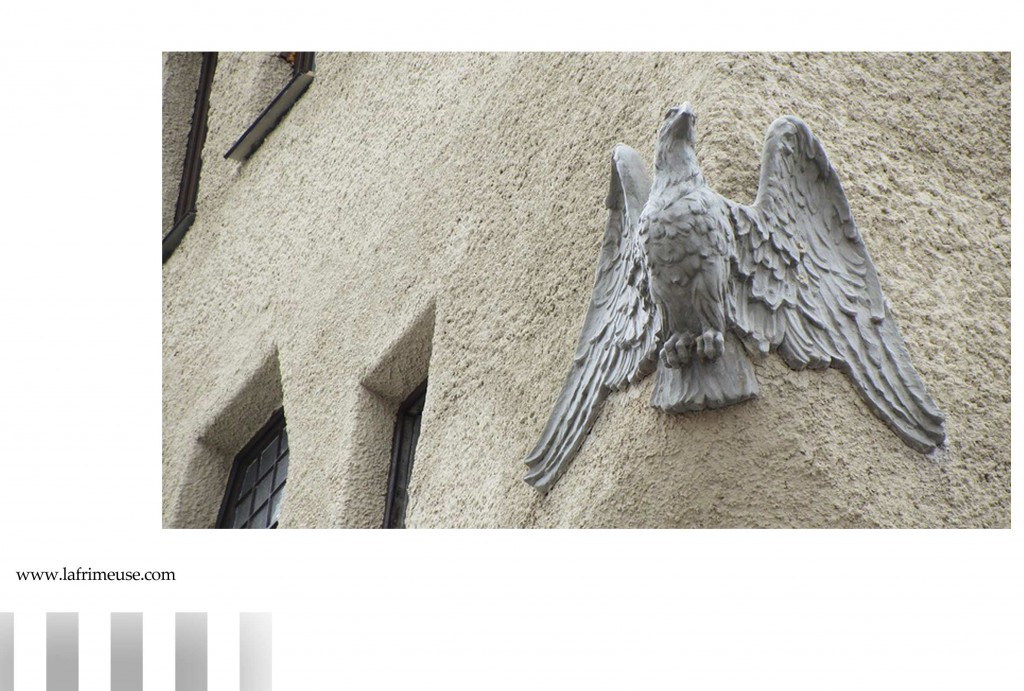 And only in St. Petersburg and a little bit in Vyborg you can get acquainted with the harsh elegance of such a phenomenon in the history of architecture, like “The North Art Nouveau”. 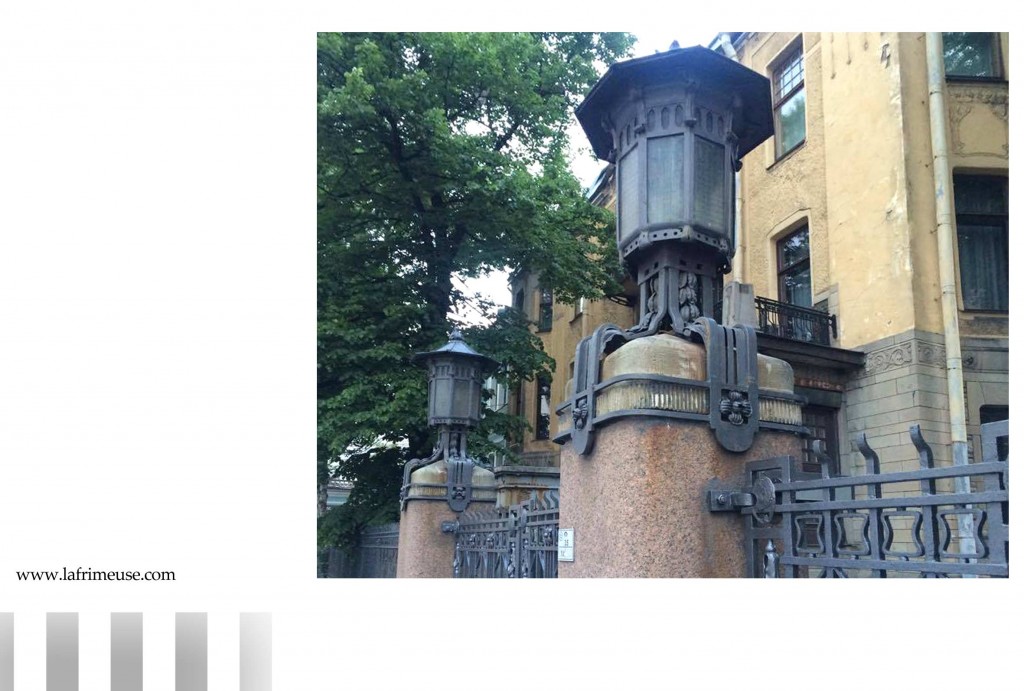 This style appeared at the beginning of the twentieth century, to a certain extent, under the influence of the architecture of Finland and Sweden, where national romanticism, with its interest to the stories of ancient tales, appealed to its culture, traditions and history and at that time it was one of the main trends in the art of these countries. 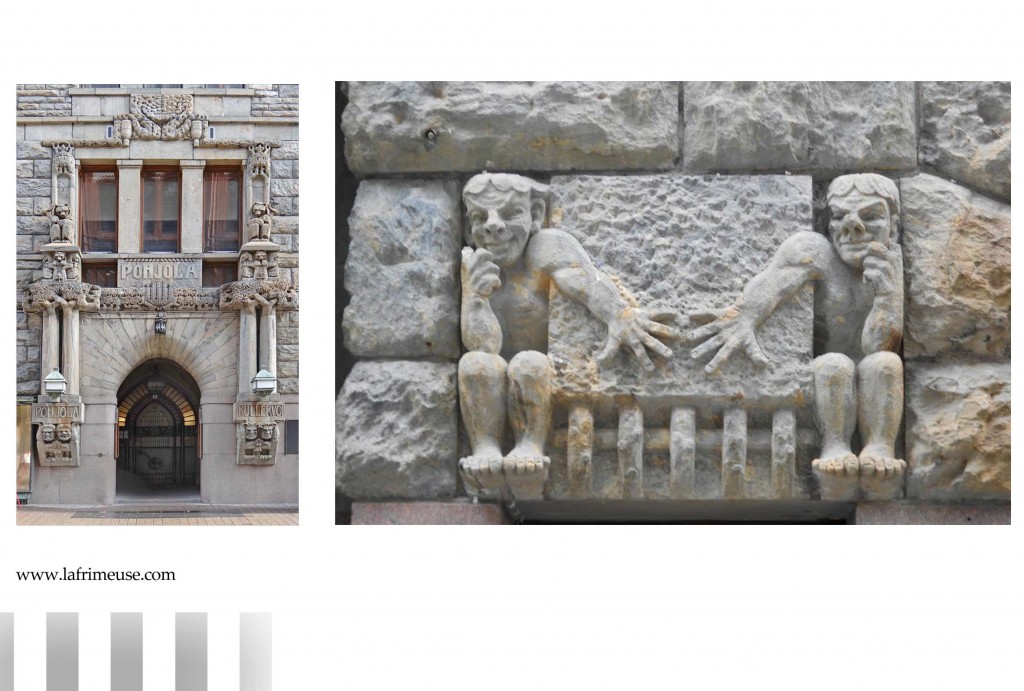 The culture of its “northern neighbors” got famous for Russia owing to Sergei Diaghilev. This man is truly the titanic figure in Russian culture, the scope of his activities, his taste and passion for art was amazing. 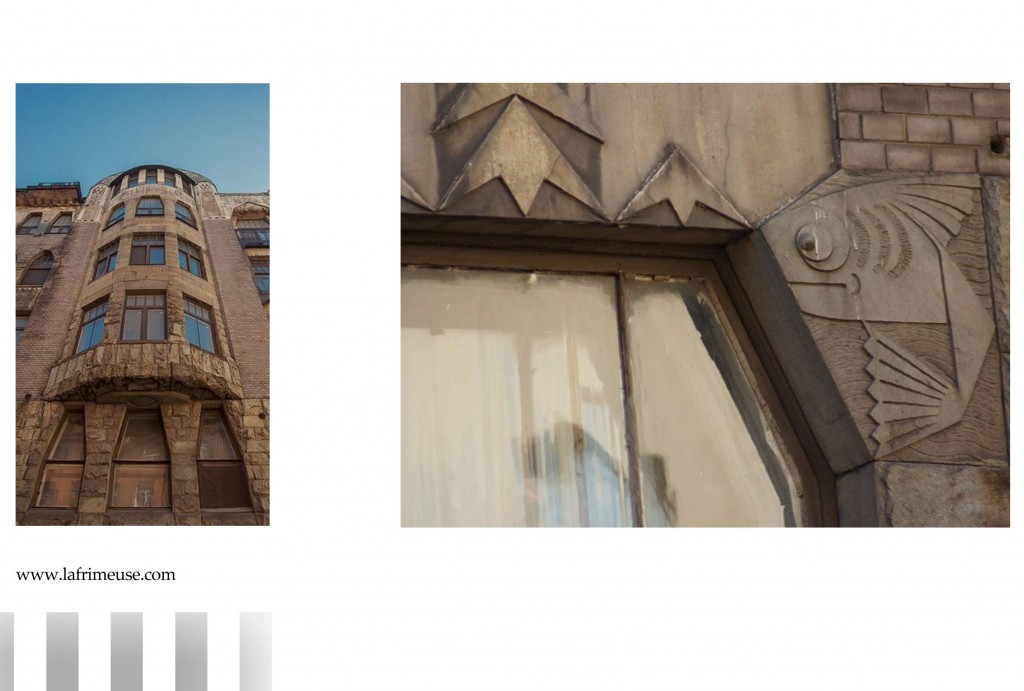 In 1897, Diaghilev organized an exhibition of Scandinavian artists in the technical school of Baron AL Stieglitz. Perhaps this, he opened to the architects the harsh poetry of a new trend for that time, and at the beginning of the century, houses in the style of the “Northern Art Nouveau” began to be built in St. Petersburg. 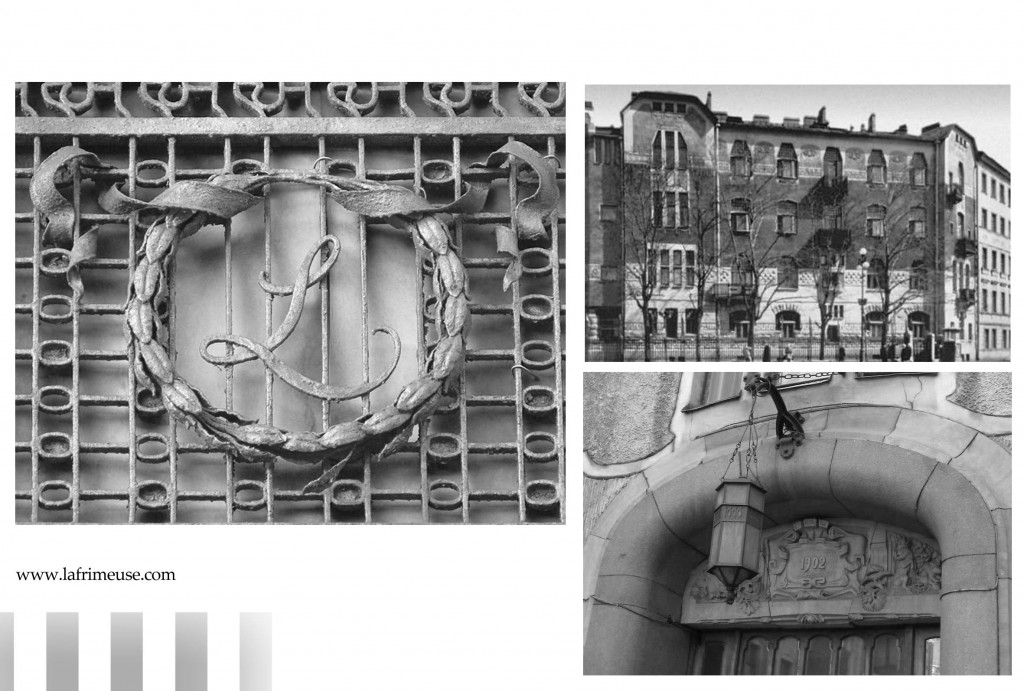 One of the first and architects of this style was the representative of the Swedish diaspora of Petersburg Fedor (Friedrich) Lidval.

Its construction of the period from 1901 to 1907, including the residential complex of the family Lidval (Kamennoostrovsky Prospekt, 1/3), became the classics of the Northern Art Nouveau. 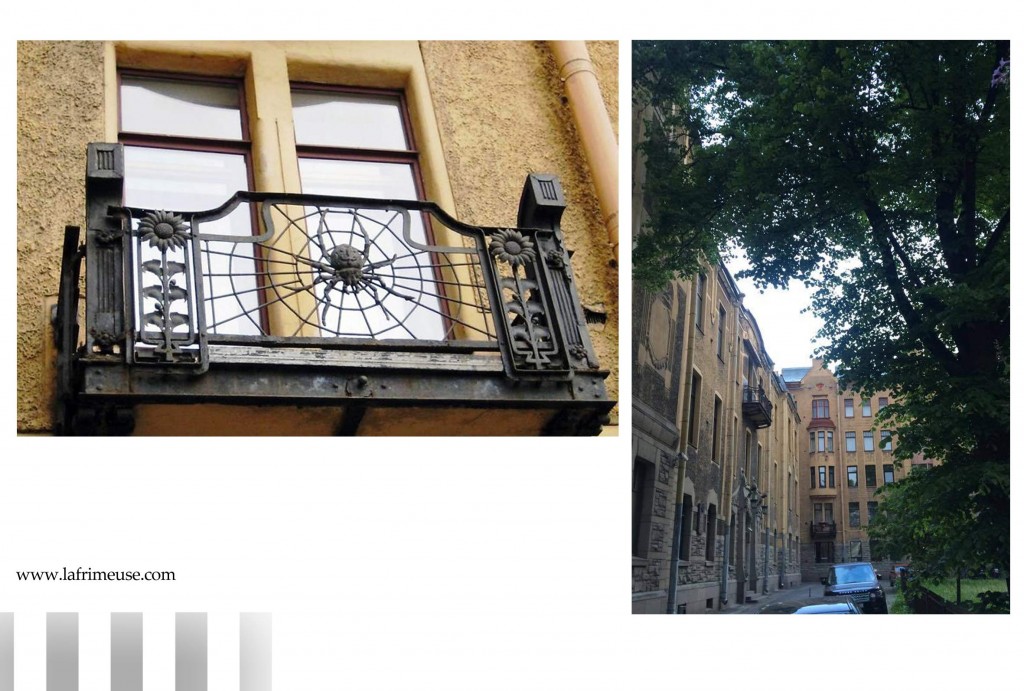 In 1898 the site on Kamennoostrovsky Prospekt was bought by the mother of the architect Fyodor Lidval Ida Baltаzarovna.  This building was the first self-employed work of  the architect. 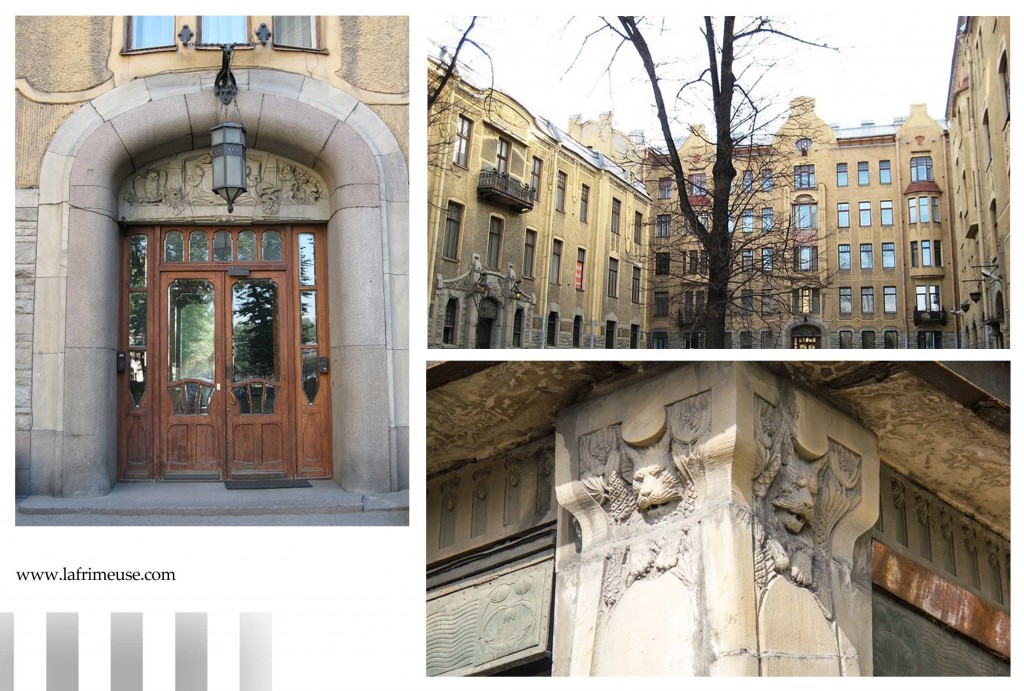 The architect erected a complex of buildings of different number of storeys. But despite the asymmetry, the architectural structure, in general, seems to be a single harmonious composition.

He also was the author of the innovation, previously not seen in the architecture of St. Petersburg. He designed a large front yard facing the street. Thanks to that, the apartments got a lot of daylight. It was a completely unconventional variant of a profitable house. In the main buildings of St. Petersburg had “yard-wells.” Small internal spaces, in which every sound was heard even on the highest floor.

The decor of the facade bears all the features of the style Art Nouveau. The relief inscription “1902” adorns the central portal, the year of construction. On the sides of the inscription and then begins the most interesting, inherent only in the northern branch of this architectural style are  almost fabulous images of nature. The bird that arrived and sat on the pine  is next to a hare, and behind it another one runs out of the forest. 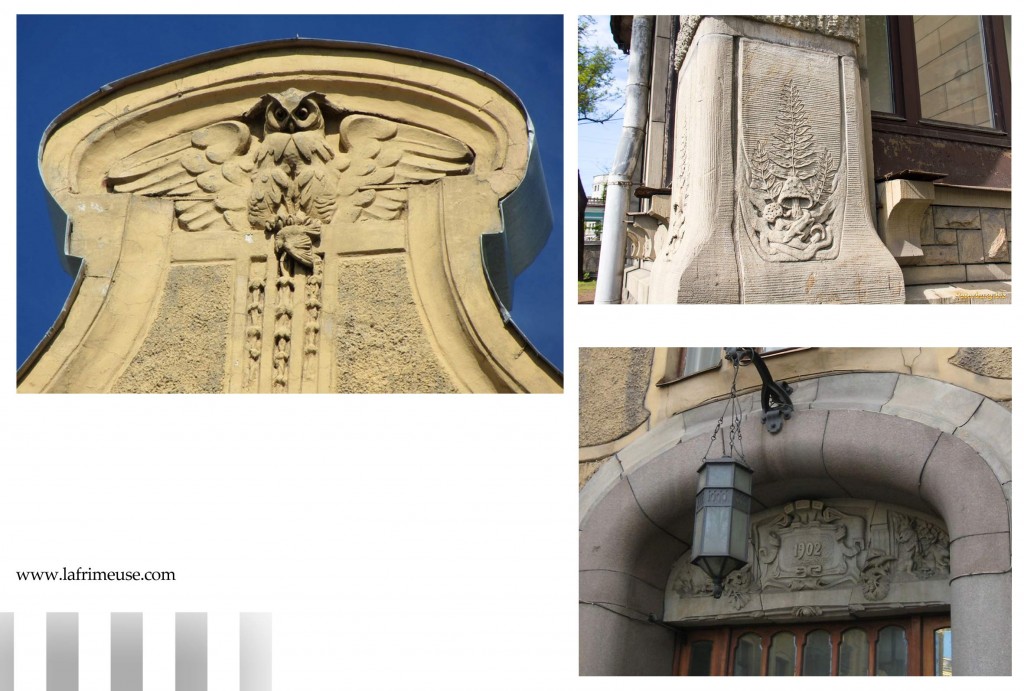 In this house  the 3rd floor was occupied until 1915 by the owner herself – Ida Lidval, and her sons Eduard Lidval and Fedor Lidval lived in the neighboring apartments on the same floor   Of the famous tenants  therewas the artist Kuzma Petrov-Vodkin. 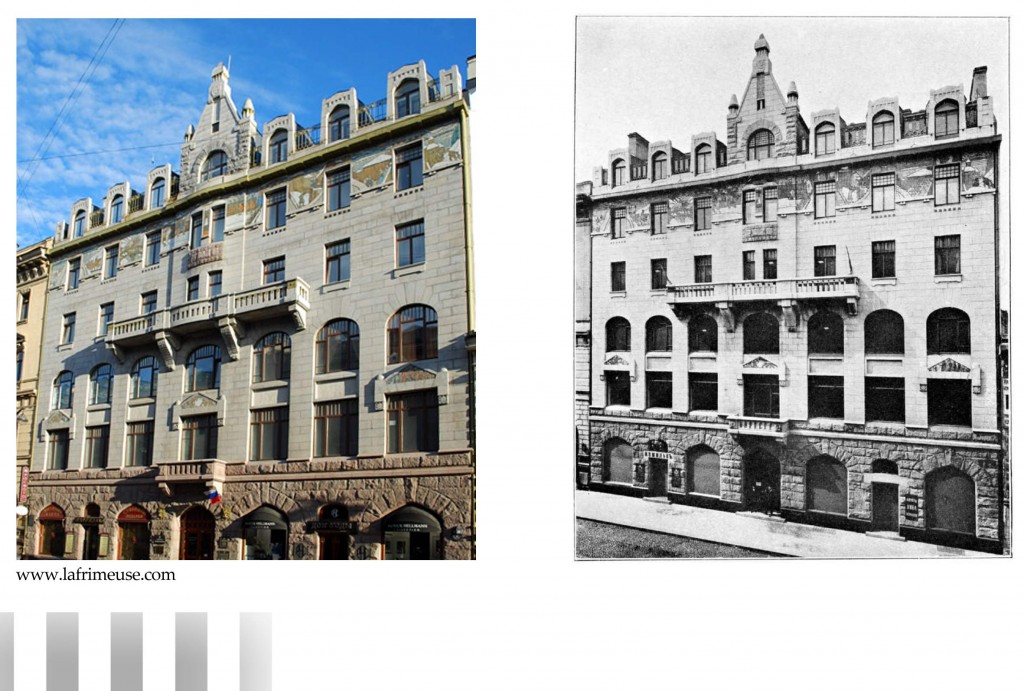 If you once have walked  around street Bolshaya Morskaya  and enjoyed by the beginning of the White Nights season, have breathed in the damp air of the cold St. Petersburg summer, you could raise your head and you would find that the gray building (number 35), at the bottom covered with a rough stone  that rushed upwards with clean and elongated shapes ending in three gables. The frieze of the building is decorated with fabulous panels, on which the knights are slender rows running along the cornice to harsh hikes. 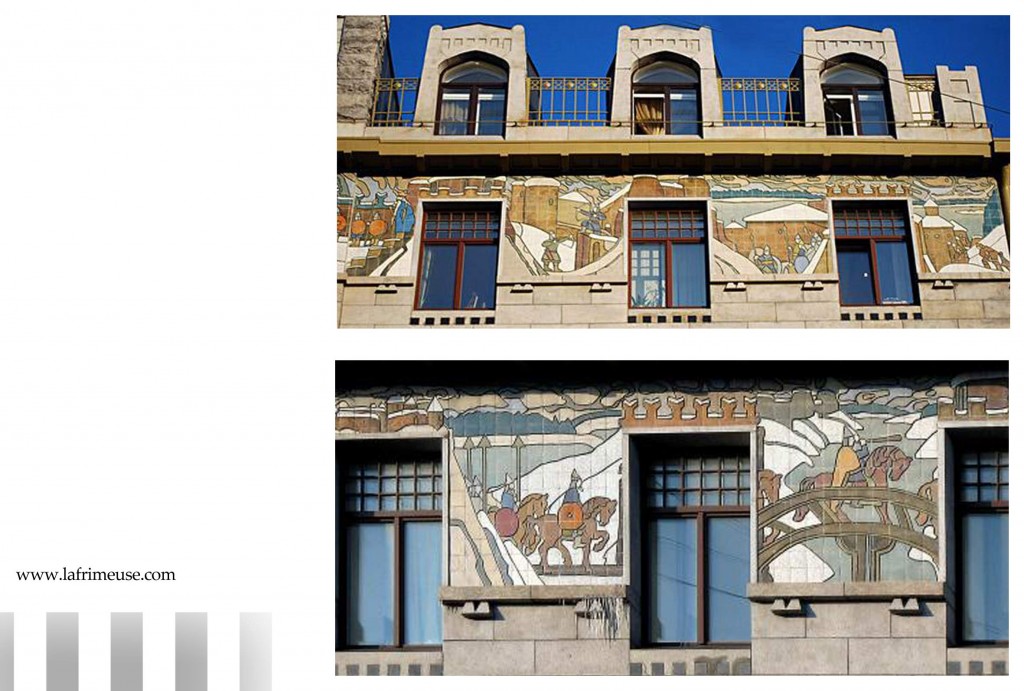 One of the features of the Northern Art Nouveau is the variety of  facing textures. The walls of the building are covered with light gray granite. The first floor of the house is faced with blocks of red Gangut’s granite. Smoke-pink granite from the Kovantsari deposit is the facing material of the upper floors. The combination of black, red and light grayish-pink stone creates an elegant appearance. But the most effective element of the decor is majolica compositions on the theme “Russian North”, made according to the drawings of N. K. Roerich. The upper majolica mosaic frieze was lost during the siege of Leningrad. Only three small episode have been preserved above the windows of the second floor. 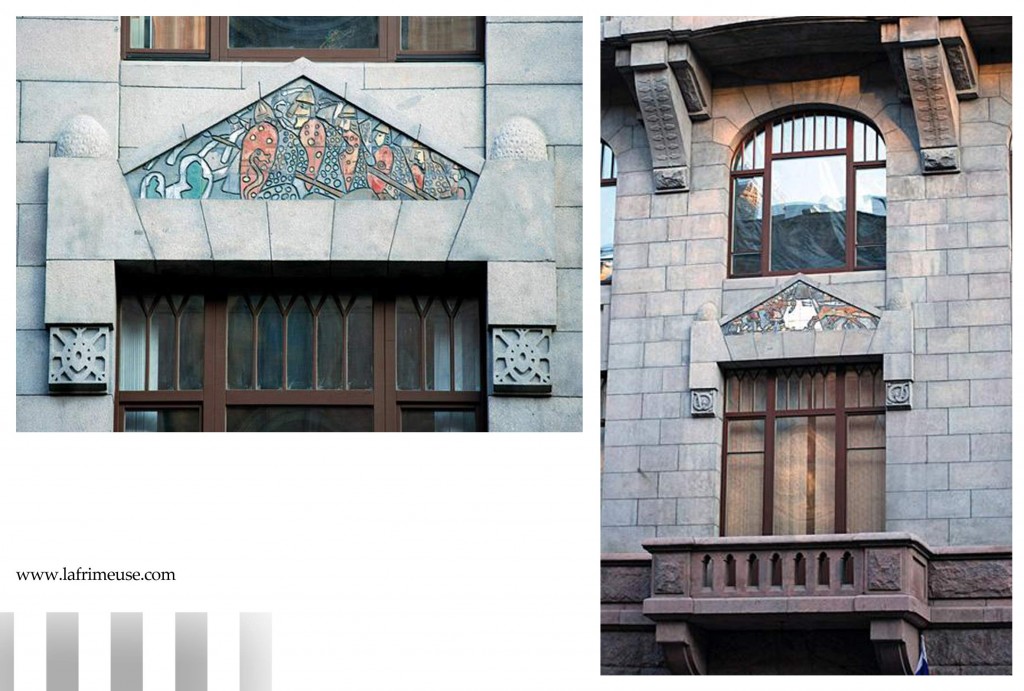 The majolica frieze was recreated by specialists of the firm “Poliform-R”, under the direction of A. V. Oleinik in 2009.

House with owls, Putilova’s house on the Bolshoy prospect of the Petrograd side, 1907, architect Ippolit Pretro 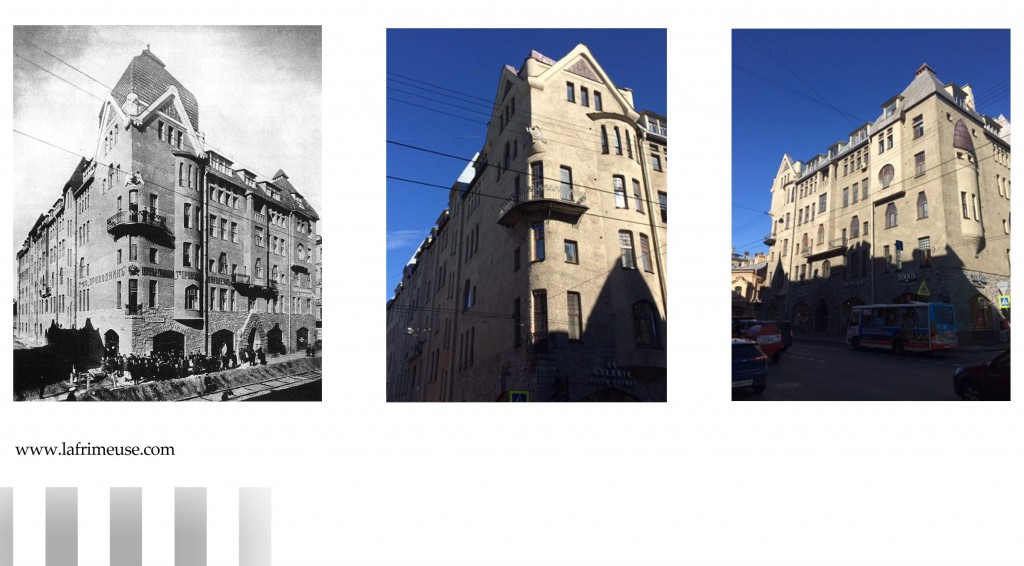 Owls crown the portal of the building from it, that’s why it was nicknamed among the people “House with owls”. Architect Ippolit Pretro is one of the main representatives of the Northern Art Nouveau in St. Petersburg, built this house for merchant-woman Putilova, who owned a store on Vasilievsky Island. 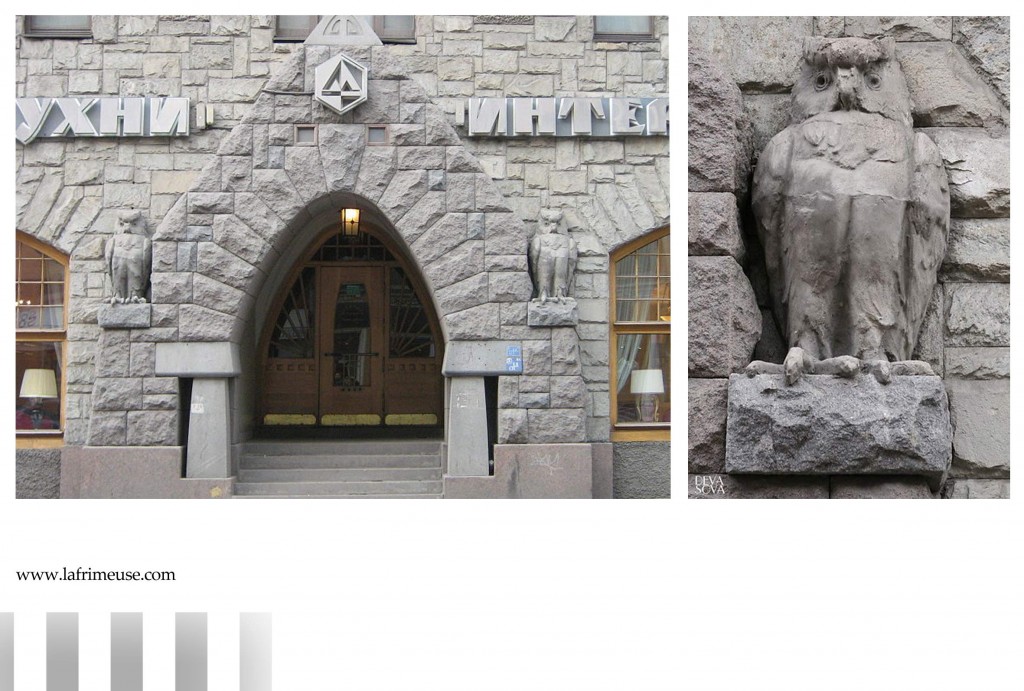 At first the building attracts attention with that artistic disorder, in which the windows are made in different forms: here they are wider, and there, on the contrary, it is longer. Following this, the gaze falls on the various rhytm of the bays windows and the abundance of ornaments, that was created by  the architect under inspiration of images of northern folklore, flora and fauna. 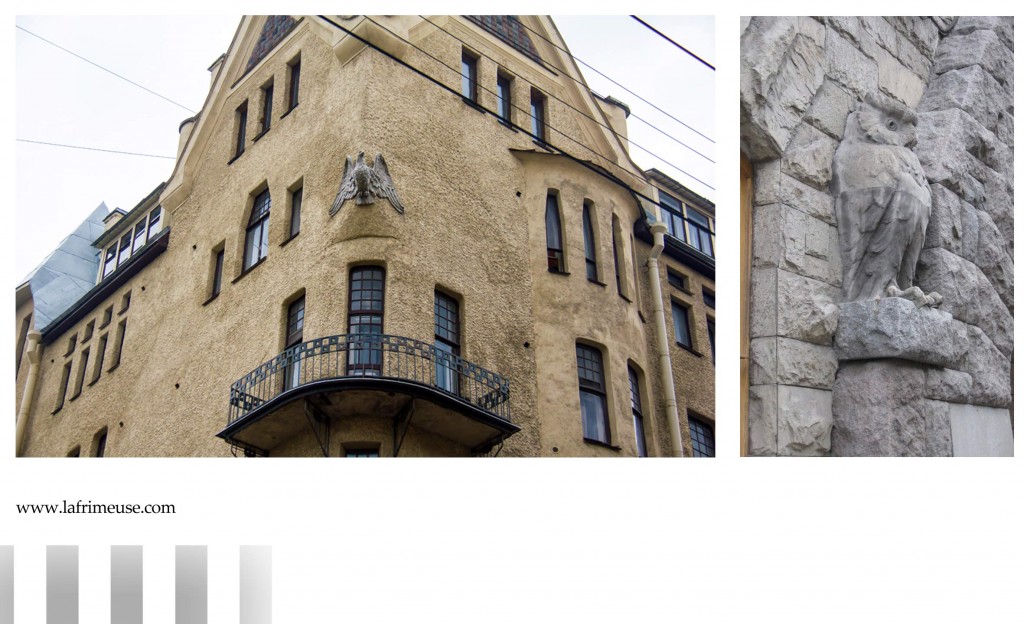 The house became one of the brightest examples of the Northern Art Nouveau, which began to make its first steps in St. Petersburg and the architects were in some search.

In 1912, Pretro was awarded a silver medal at the city’s competition of the best facades, that at that time was the highest award for the architect. 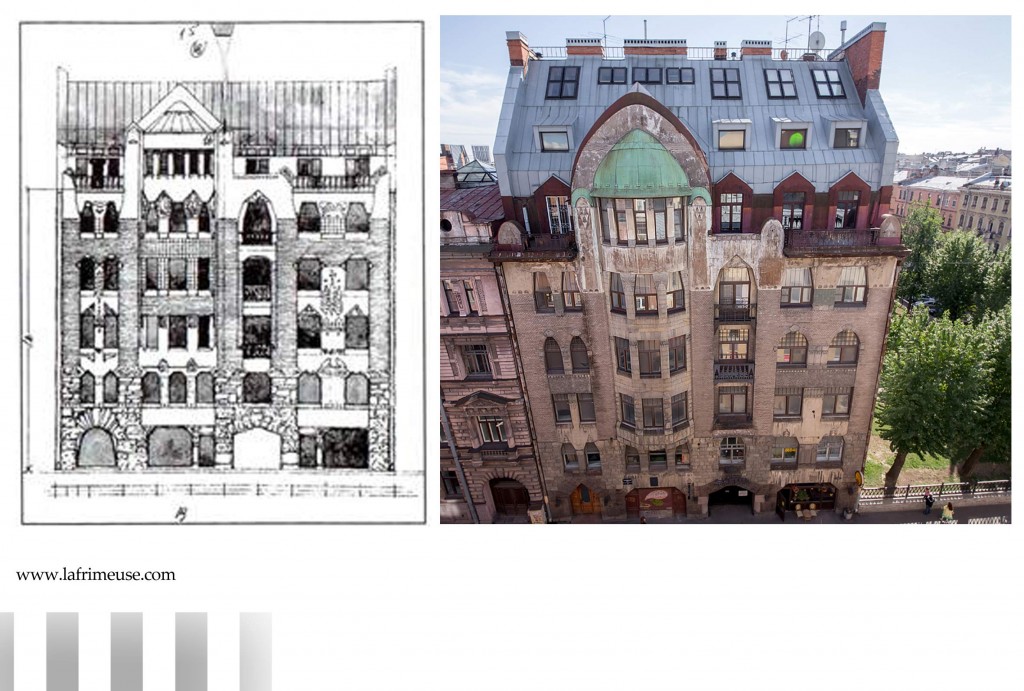 At the beginning of the 20th century, St. Petersburg architect Alexei Bubyr purchased a site for a building on Stremyannaya Street and he and other architect Nikolai Vasilyev built a profitable house. Bubyr planned to live with his family, and leasing out the rest of the rooms and apartments to townspeople. This building had become a new attraction because of the curious decors that abundantly adorn the facade of the facility. What kinds of creatures descend through its walls: crows, fish, plants, obscure creatures from legends and fairy tales. One of the major place of the decorative design is taken by the image of the sun, which compensates the main part of the facade, turned to the north. 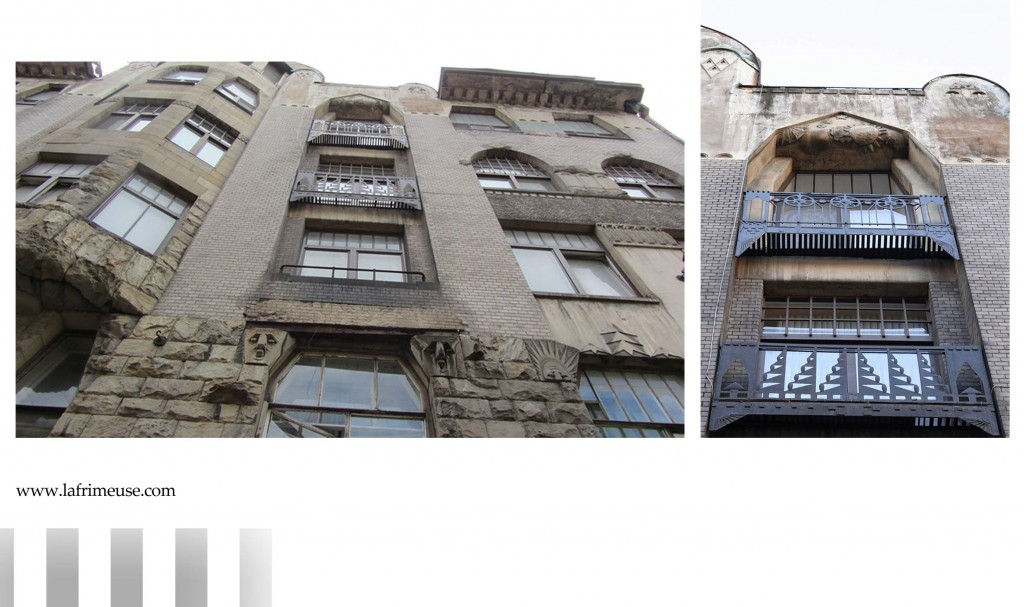 Building of the new house lasted two years. 1907 is the end date for constructing. At the last, Bubyr and his family began to live on the sixth floor, .
Architect owned the house until 1919, but soon after the revolution he was forced to leave for Ukraine, where his life ended in a tragic way. 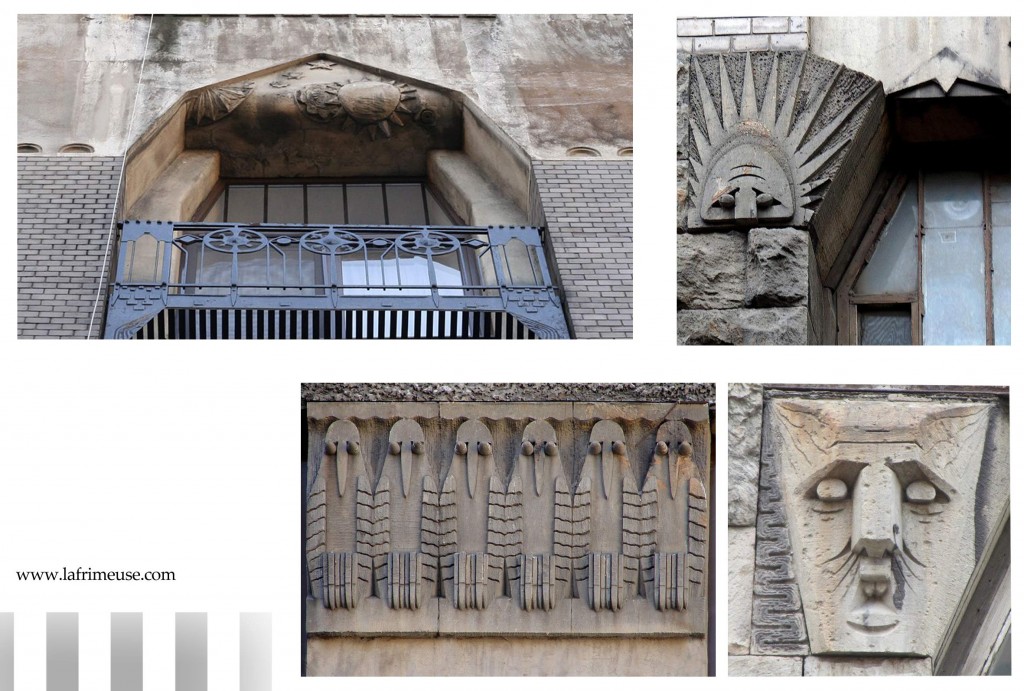 The facade of the house on Stremyannaya is filled with images of stylized snakes, fish, human heads, symbols of the sun. The front porch is guarded by cut stone birds. This bizarre decor is combined with the darkened walls of this asymmetrical building. The house at Stremyannaya 11 is considered one of the best examples of Northern Art Nouveau in St. Petersburg. All the decor is thought out to the smallest detail, including the forged gate and the railing of stair flights. 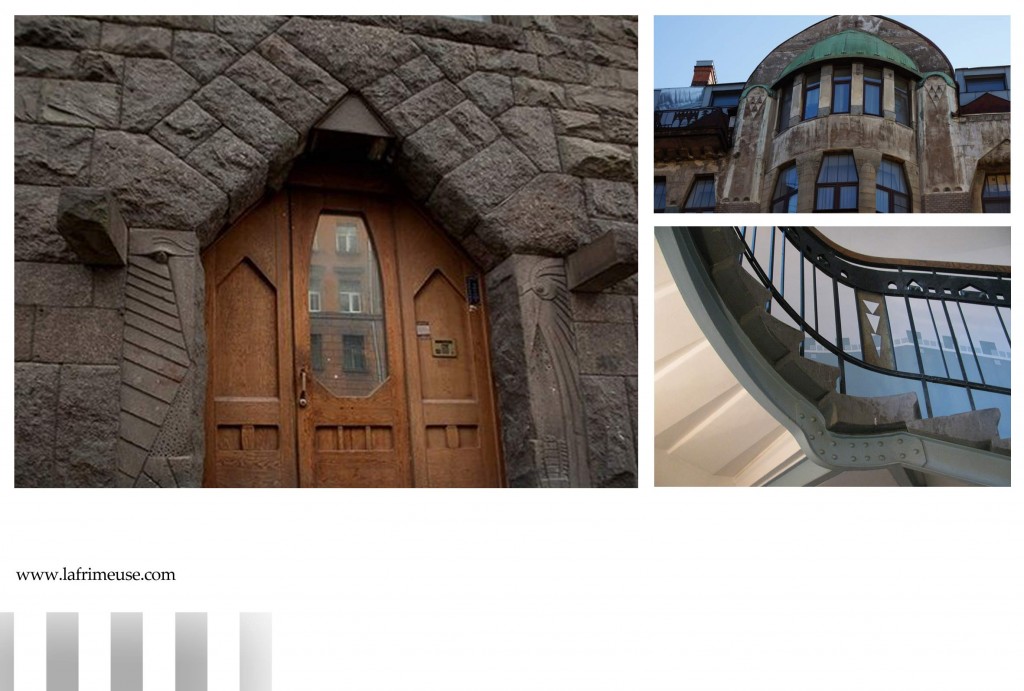 The tenants were respectable in this dwelling . At one time next to Bubyr lived another of his partner in architectural projects, Lev Ilyin, after the revolution became the chief architect of Leningrad and died in the blockadeof the city during WWII. Nikolai Vasilyev  had also lived briefly under this roof till 1917, but then went to the Crimea, from there – to Constantinople, and then to America. 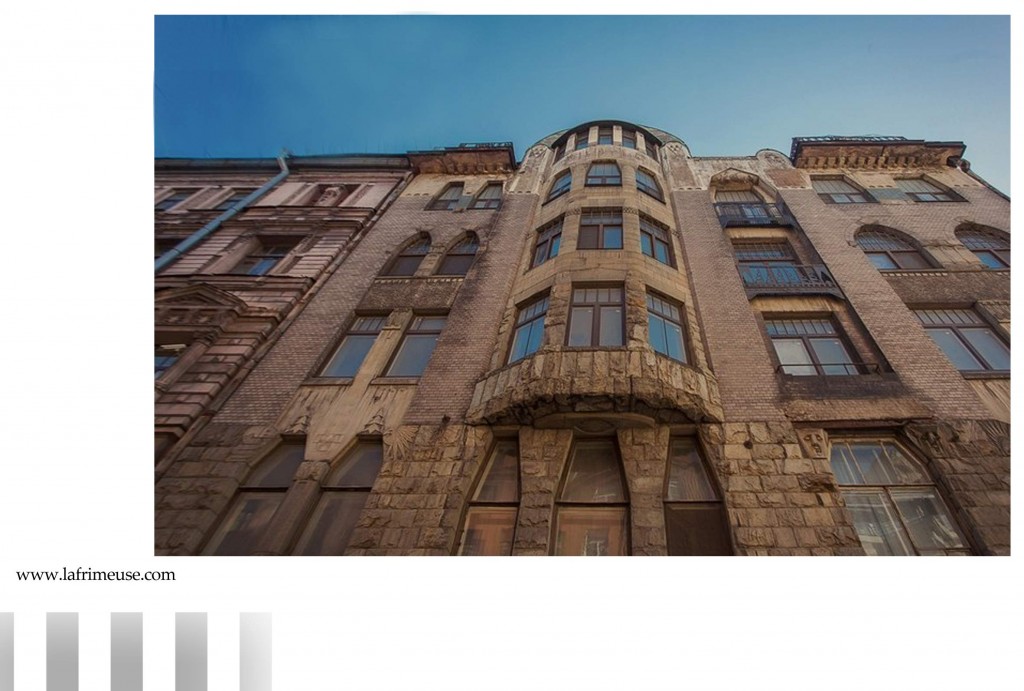 Soon Bubyr, who had lost all private orders, left his house. The route led to Ukraine, but was cut off halfway. There were reports that the architect was shot by bandits. According to one of the legends, the widow of Bubyr (the daughter of the owner of the piano factory Diederichs Freres) discovered a family’s suitcase at a priest. He admitted that he found him next to two corpses that had been robbed. It’s common for the Civil War. 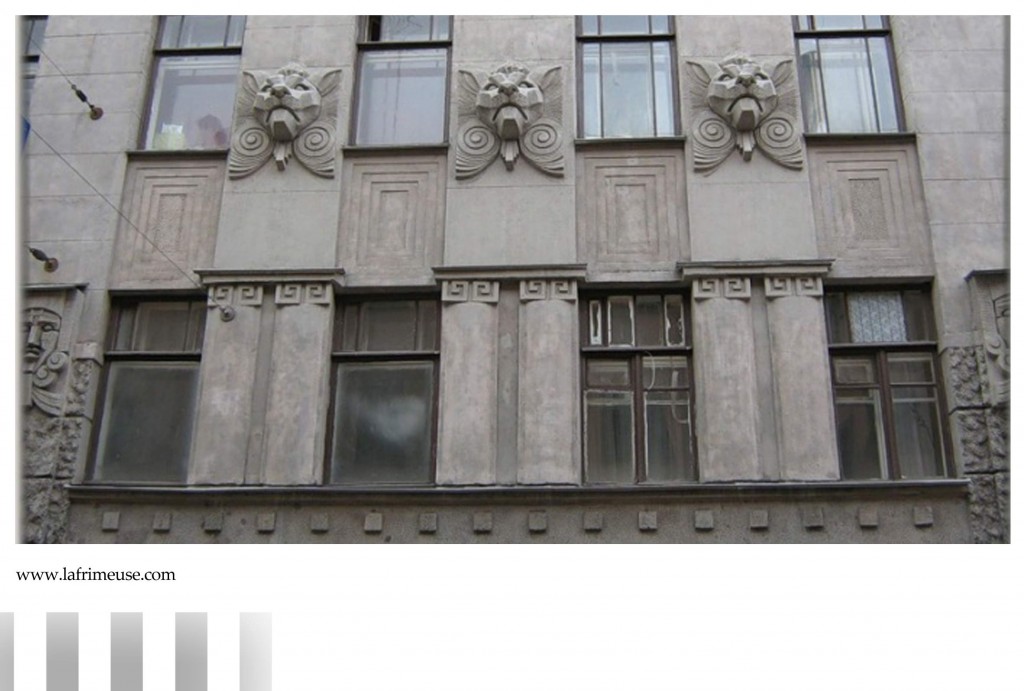 This building is one of the most interesting and latest monuments of the Northern Art Nouveau in St. Petersburg. The apartment house was built by the architect A. L. Lishnevsky, with the participation of the architect A. L. Berlin and the civil engineer N. N. Aistov, at the request of the doctor AL Sagalov, the director of the private maternity hospital. 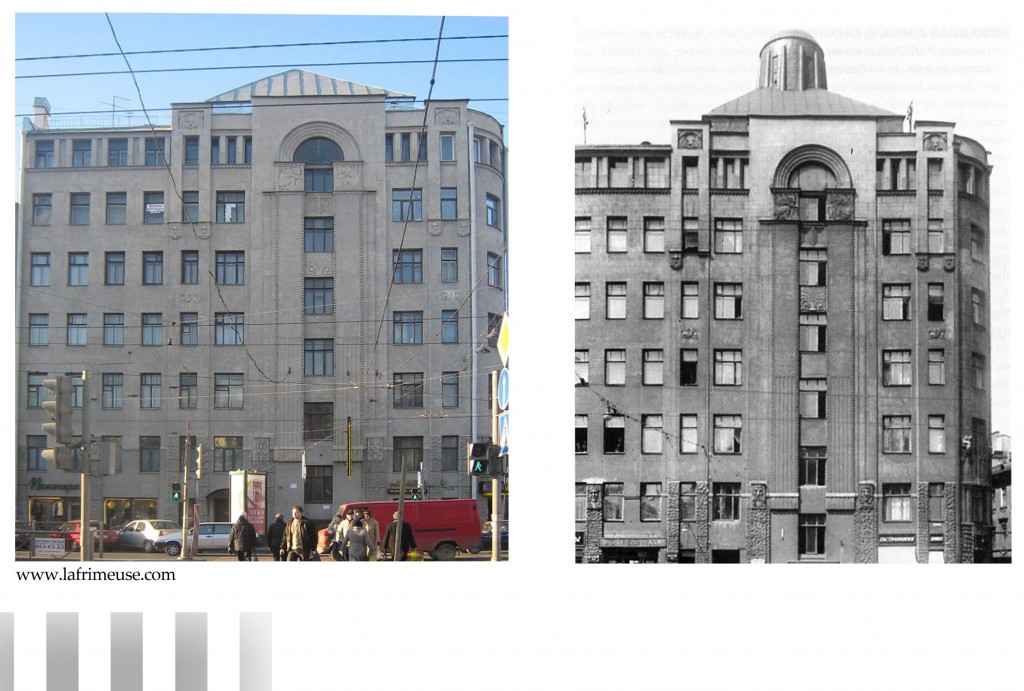 Some believe that much of the composition and decor was borrowed from another architectural object – the house of Pietinen in Vyborg, at the railway station’s square, built in 1908 by the architects Jung, Beaumanson and Lindgren, (which will be discussed below). 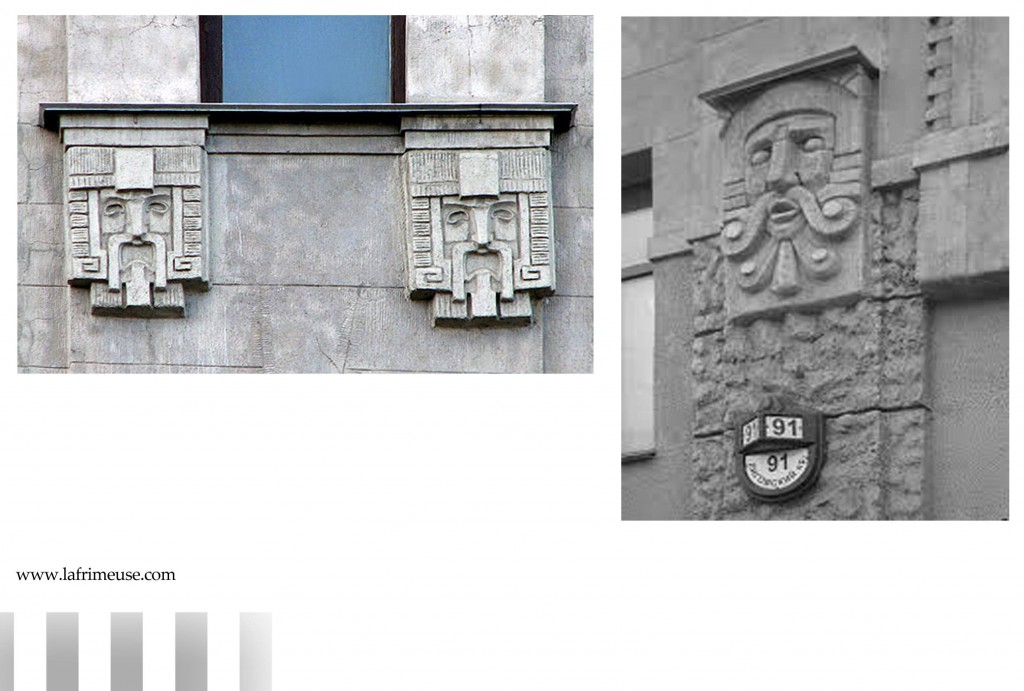 The surface of the walls is decorated very sparingly, only the pylons of the lower floors are plastered as stone slips. The greater role is played by the reliefs decorating the house. The central element of the facade overlooking Ligovsky Prospekt is a staircase, marked out by a giant frame with an attic. This element is quite rare for St. Petersburg. Usually the stairwells tried to orient themselves in the yard. The facade facing Svechnaya Lane is noticeably longer, and decorated more diversely. On it there are two bay windows, loggias, the central place is occupied by three spectacular lion masks. 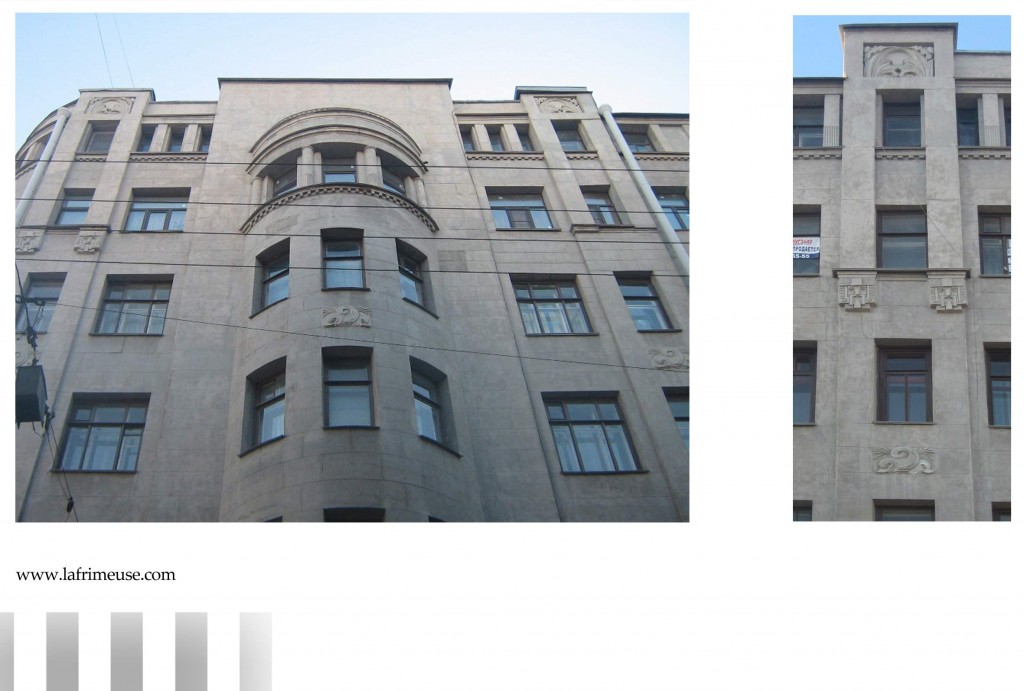 Features of the “Northern Art Nouveau” manifested themselves in a number of works far from it. For example, severe northern modernity prevails over the oriental motifs in the building of the Cathedral Mosque. 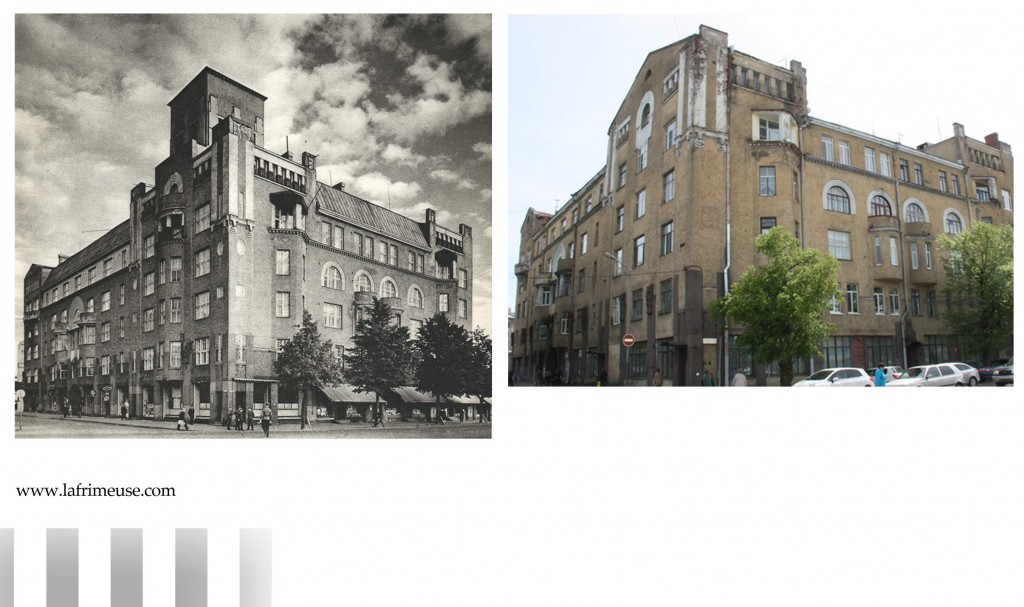 Opposite the railway station you can see a large building in the style of national romanticism. This is the former home of Pietinen. 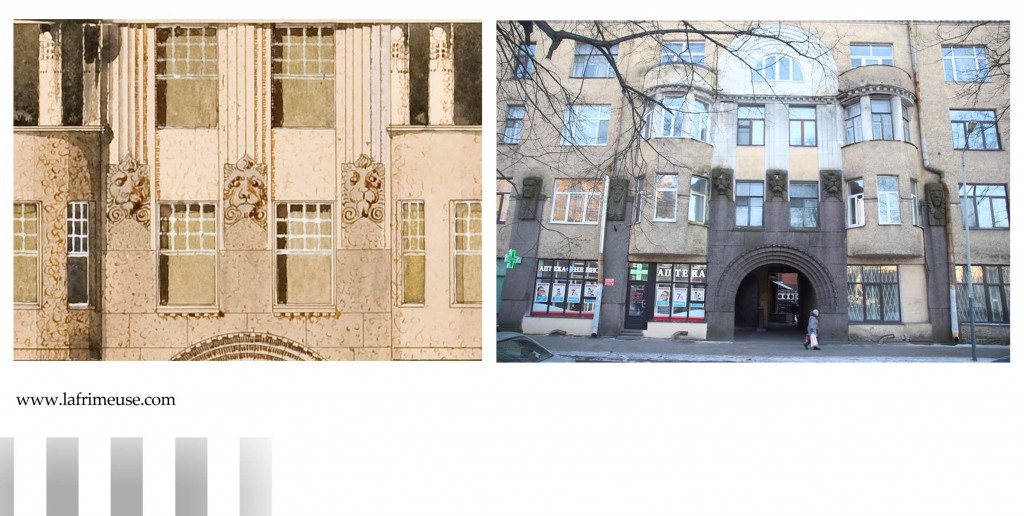 The house was built in 1906-1908 by order of furniture manufacturer Matti Pietinen. 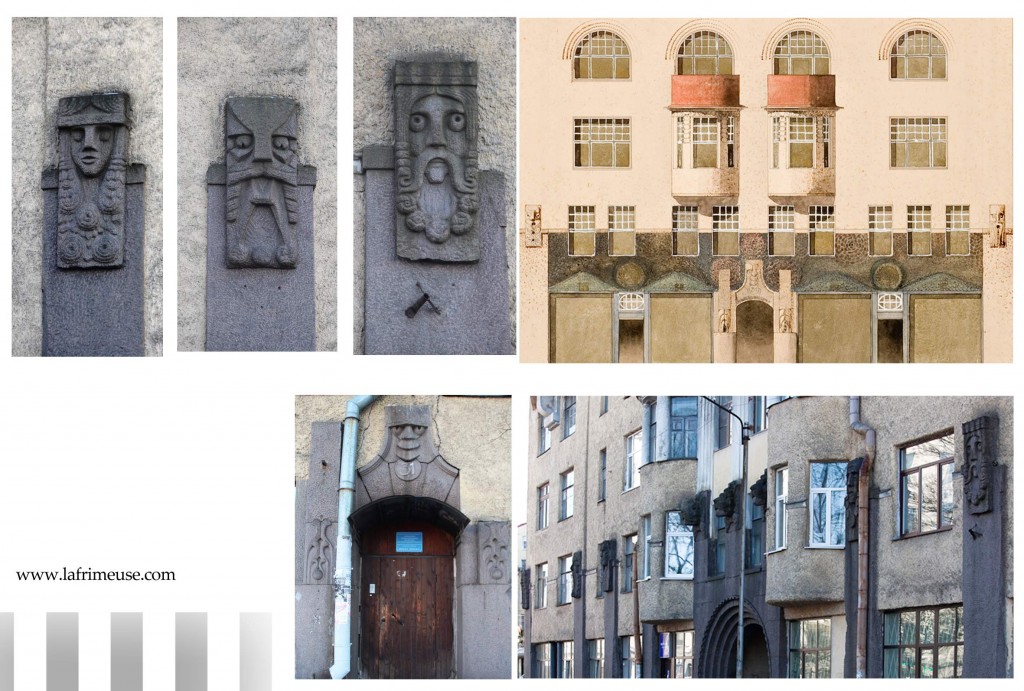 The project of the house was designed by architects Bertel Jung and Oscar Bomansson.

The Northern Art Nouveau is a unique phenomenon in Russian architecture. Combining austerity and elegance, an asymmetrical composition, a restrained color spectrum, a combination of textures, a game of light and shadows of relief decors, and sometimes bright inserts in the form of mosaic panels. Incredible style sets a unique atmosphere for the city. These buildings of St. Petersburg as dressed in gray suede dandies are always kept and are filled in with subtle chic.

Five design things of this week #9
Reality is fabricated out of desire. Man Ray